Carbonised
✭✭✭✭✭
✭✭✭✭✭
Time to showcase my Colossal Aldmeri Grotto. First off, this is a home I didn't plan on getting. The Grotto is actually a terrible home. It's one of the largest, if not the largest, home in the game, with a vast outdoor area, as well as a decent sized ship vessel. So I guess you could either decorate the boat and have an empty grotto, or decorate the grotto and have an empty boat. Neither solution is pretty satisfying. Shame ZOS for continuing to release these gargantuan homes with such a paltry item limit. Boo. Anyway, the reason I did decide to get it after all, was that I needed to migrate my coral garden to another home, prior to the grotto, I had a moderately sized coral garden in my Tel Galen beach, since I do love things connected with the sea and the shore, but it took up too much space, and the Aldmeri Grotto was the perfect place to relocate it, and expand vastly on it. So I decided I could make a decent coral garden in this home, as well as do a little decorating with the ruins and the boat itself. And when the Grotto was on discounted sale last time, I grabbed it.

So, don't expect anything particularly fancy here, it is a home decorated after a nautical theme, with lots of items connected to the ocean. The ship itself has a bedroom and a captain's room, and is decorated in the Alinor style, again with focus on using pearls, ivory, seashells and starfish as decorations. There are a few empty areas on the ship, simply due to the item limit. The grotto itself holds a smaller fishing vessel, some anchors and other nautical items, as well as a large collection of both Alinor style limestone corals, and the Antler corals. Dispersed in the corals are a lot of kelp, starfish, seashells and giant clams. Inland and away from the shore, cherry trees and seagrape trees fill the grotto, and a line of cherry trees, what I like to call the Cherry Path, runs up to the entrance to the Aldmeri ruins. The ruins themselves have pretty much been left as ruins. Some limestone and marble furniture and urns and such hint at the ruins' former life, while now serving mostly as atmospheric pieces. There are various limestone fountains still in use, as well as some trees, bushes and vines. At the top of the ruins, more flowers and cherry trees lead to a plateau, that has been decorate with a magical waterfall, some marble benches and tables, and some goblets and chalices where you can sit among the cherry trees ans listen to the wind chimes and have some Altmer wine, while enjoying the view.

As I said, nothing fancy here, just a large coral garden and some atmospheric ruins. The video turned out somewhat laggy, which is strange considering that I just got a new PC and can run the game absolutely flawlessly on ultra now, but I guess maybe it has something to do with the free video recoring software maybe. In any case, here are some screenshots of the home as well as a short video. Next up is the Clockwork Observatory home, which I have been looking forward to showing for a long time now, easily one of my favourite homes and full of lots of interesting pieces. 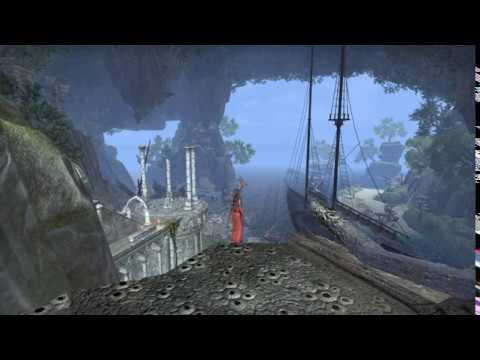 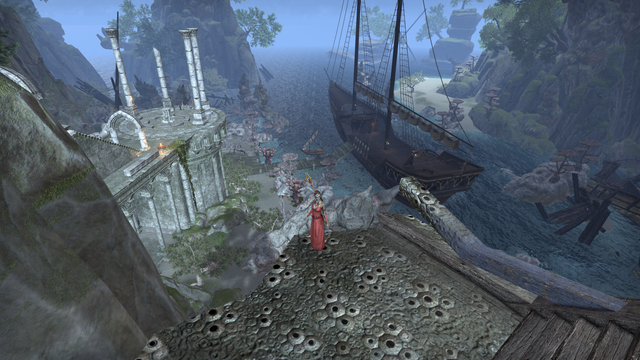 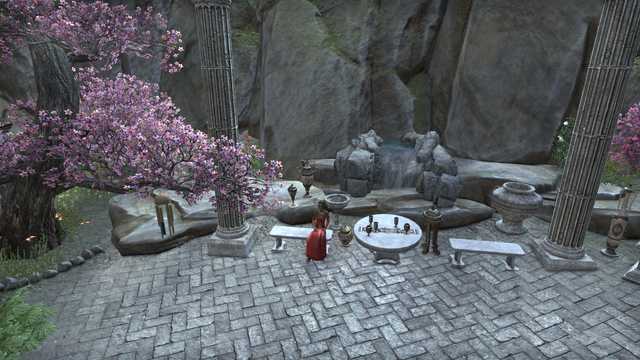 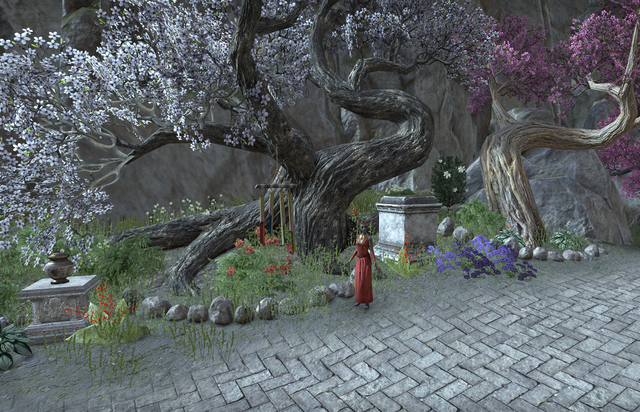 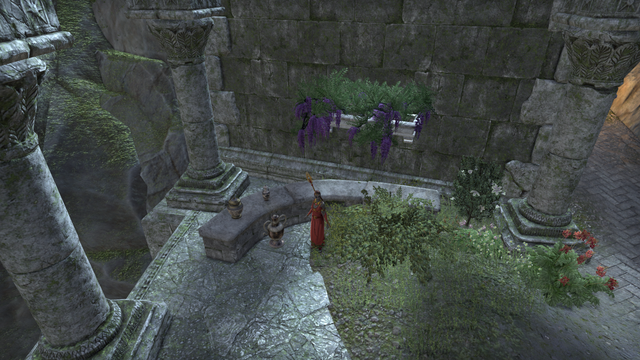 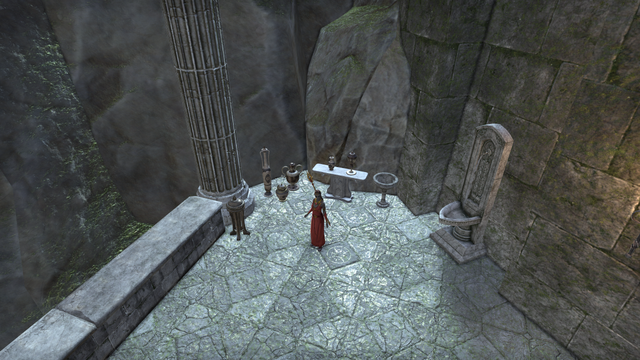 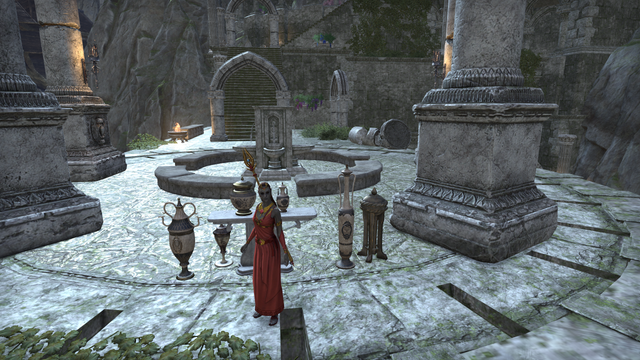 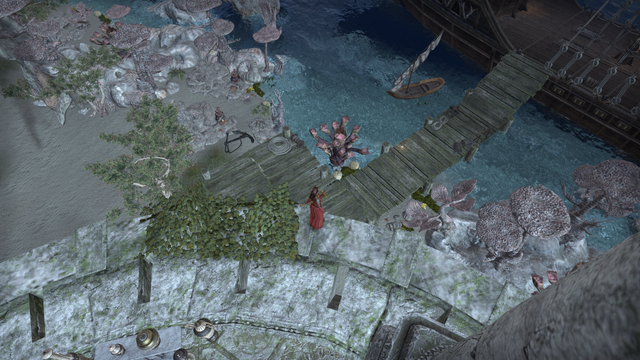 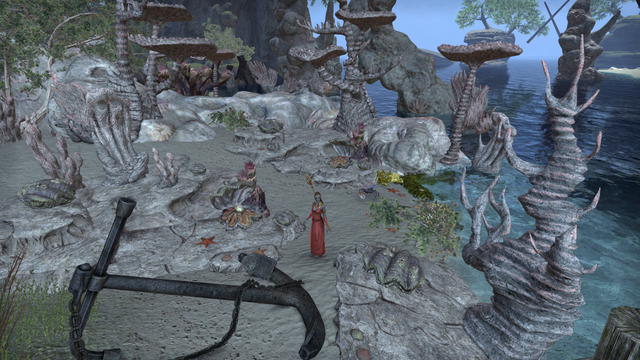 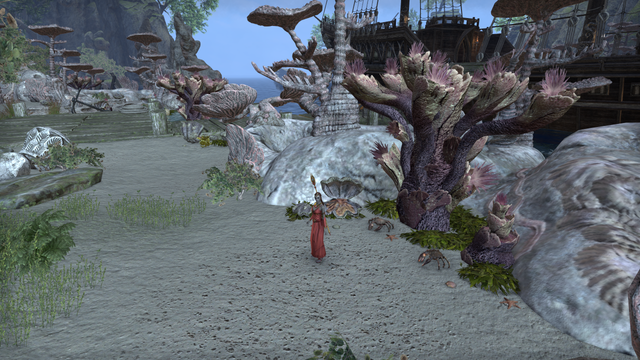 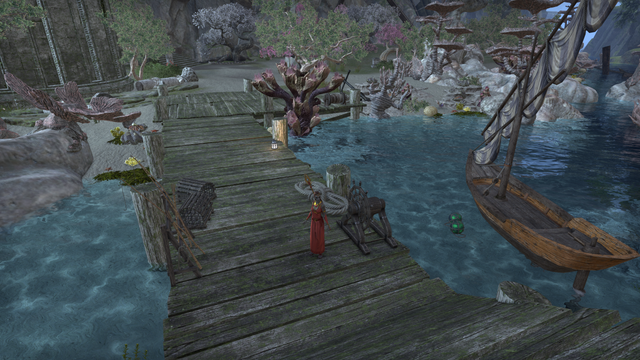 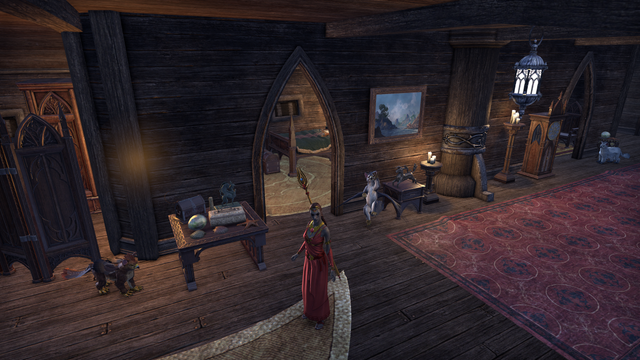 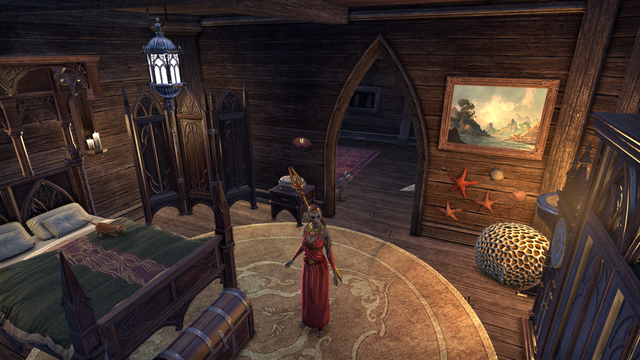 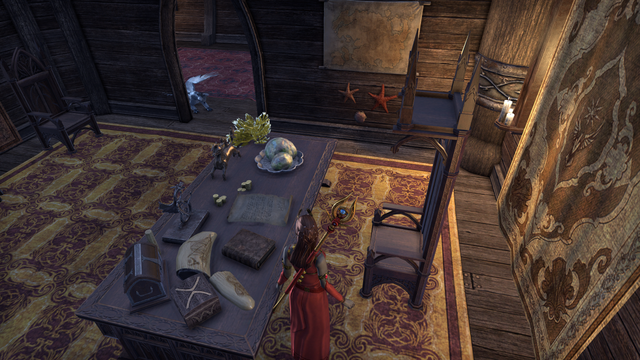 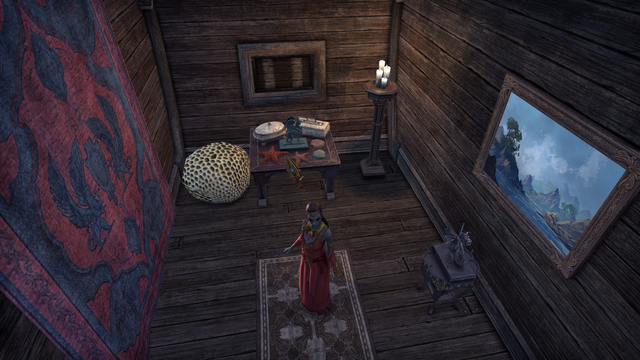