erio
✭✭✭✭
Im sure at this point there is no need to inform you of what the Bone Tyrant necromancer skill tree ultimate Pummeling Goliath is capable of. Its not a hard setup. Sword & Board, and some bash damage enchants on your jewelry. Throw your points into stam and slap on hundings or some other damage set and you're ready to go. First of all, before we ask the question of "is this intended?" we must first know of what bone Goliath is capable of. If you get killed 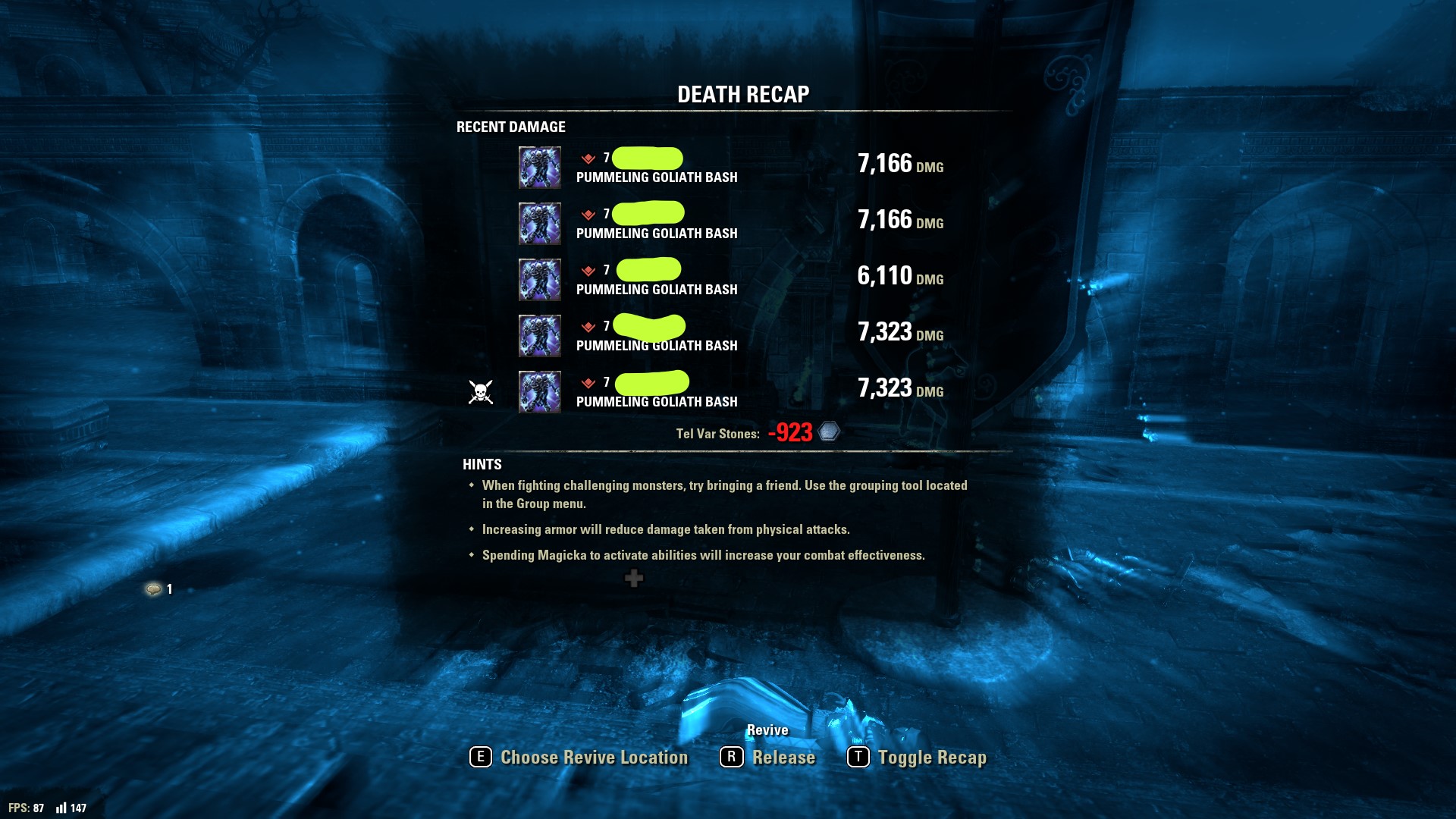 (not my image. Would of screenshotted my multiple experiences i've had but I dont have screenshot key bound and I forgot to anyway lol)
Your damage recap is going to look a little something like this. All bash and maybe the shield gap closer in there somewhere. Now spamming one attack that does 6k+ damage isnt necessarily broken. Hey if someone wants to spam Wrecking Blow, power to them, but the problem with this ultimate, is that bashes can be done INCREDIBLY fast. Id say about 2 a second. 14k (aoe) damage a second, with not a huge cost behind it? Alright something isnt right here, but there must be a way to avoid this right? Only if you're the fastest person in your group. The S&B gap closer usually covers this though. If you're a mag toon or out of stam from running, one of these bad boys will shut ya down real quick. So obviously you'd want to become tankier so you don't die in 2 seconds right? Nope still dead. Now some of the necromancers defending this ulti, are saying that its "easy to avoid", "only lasts 20 seconds", and "costs a lot". First of all 20 seconds is enough time for the necro to kill you and everyone around you. Remember this ultimate makes the bash AOE. Second of all 230≈(idk exact all passives reduced cost) ultimate is easily reached by a necromancer. Id say they have some of the best ulti gain.
The 55k hp does make a necromancer rather tanky, but not unkillable on its own. But when the necro can slam out all this aoe damage, its nearly impossible to shut it down.

Now id like to ask the question "Is this intended"
Will it be changed?

I've watched a high viewer streamer play the bash necro in Bgs, and he said he said he had reported this is the first week of the Elsweyr pts. Im sure other's might of realized this too. Looking at the ulti tooltip, it says it changes the bash. Who, on the PTS, wouldnt want to play around with this? It should of obviously been known it was broken. Maybe they where too busy changing NBs to realize. This makes me question if it was intended.
I really hope this is NOT intended. Its not fun for people who where one second having a grand old time slapping ye old town nightblade around, only to realize that a necromancer ran in from behind and killed ya all in 2.4 seconds.
Honestly what made me want to post this isnt because I got killed by one of these guys a few times. So far its rather few and far between, and I havent seen a ton of them yet. But after watching that streamer, what made we want to ask this, was because I felt bad for the people killed in the BG.
#1 June 2019
17 Quote
Prev1234567Next
Home Forums PvP Combat & Skills
Sign In or Register to comment.