Home Forums Crown Store & ESO Plus
Sign In · Register
Maintenance for the week of May 10:
• PC/Mac: No maintenance – May 10
• ESO Store and Account System for maintenance – May 11, 4:00AM EDT (8:00 UTC) - 12:00PM EDT (16:00 UTC)
The Blackwood Chapter and Update 30 are now available for testing on the PTS! Read the full patch notes here: https://forums.elderscrollsonline.com/en/categories/pts/

Marginis
✭✭✭✭✭
So, with the flame atronach crates returning, and them having the radiant apex reward I most wanted (shadow atronach senche), and myself having decent funding saved for the first time since before ESO existed, and crowns being 30% off (only 30% but whatever, it still helps)... I decided to take a shot at getting that mount.

I had previously gotten the resplendant sweetroll, in the dwarven crates (I was going for the ebon senche mount then, which I didn't really care about, but I wanted so I could say I had every senche mount in the game), which I believe was the first time they had radiant apex rewards, but I had absolutely terrible luck with any other radiant apex rewards. I should mention that this comes with other friends gifting me literally hundreds of dollars and me spending hundreds of my own, and getting every dwarven crate reward, and I still didn't get a radiant apex mount.

But, whatever. I had already gotten a few rewards from the flame crates the first time around, but I didn't have most of the regular apex mounts and I was only missing a few non-apex rewards. I'm pretty sure that all the rewards I had gotten from the flame crates up to now had been through gems.

Anyway, I spent $105USD on 21,000 crowns. Got a flaming camel. Spent another $105. At this point I realized I had a metric ton of gems, so I opened all the crates and bought every reward other than the bear mount with gems. Another $105. Lucky I was in a relaxing hotsprings area in my home at this point. I got a radiant apex mount. My god, it's beautiful, it's amazing, it's... the one I wanted least and the one my friend already had. But now I know it's possible. Got the bear mount with gems. I now have gotten every possible reward from these crates except the two remaining radiant apex mounts.

Fine, whatever, now I have two. Then, in the last couple crates... the wolf. I now have every reward from these crates except the one I want. It's gambling. I'm not stopping here. I have a problem. I don't care. $105 more.

Nothing but duplicates. I get the senche mount from the psijic crates with gems 'cuz why not. I have over 2,000.

$105 more. I can't handle this. I have some money saved but seriously, not this much. Whatever. I can put it on my credit card and pay it off before the end of the month with not my next paycheck, but the one after. I'm desperate. I don't care how rigged this system is, I'm going to beat it. I've played this game so long, spent so much money on it, I should have this.

With just a few crates to go I get the last possible reward from the flame atronach crates.

I now have every atronach senche. I have now spent over $6,000USD on this game over its lifetime. I now have every possible reward, including ALL the radiant apex rewards from a crown crate season.

I still hate that there are rewards that can ONLY be gotten through RNG, especially when it involves real world cash. I hate gambling. I'll NEVER go for a radiant apex ever again. EVER. 'Cuz I'll tell you right now, even through all of that, after STARTING with already having most of the rewards, I still think I got lucky.

I don't even like the shadow atronach senche that much. Not more than my striped senche at any rate. But now at least I have it. Finally, a radiant apex reward that isn't just a &#@~$!% sweetroll. Well, ANOTHER sweetroll. 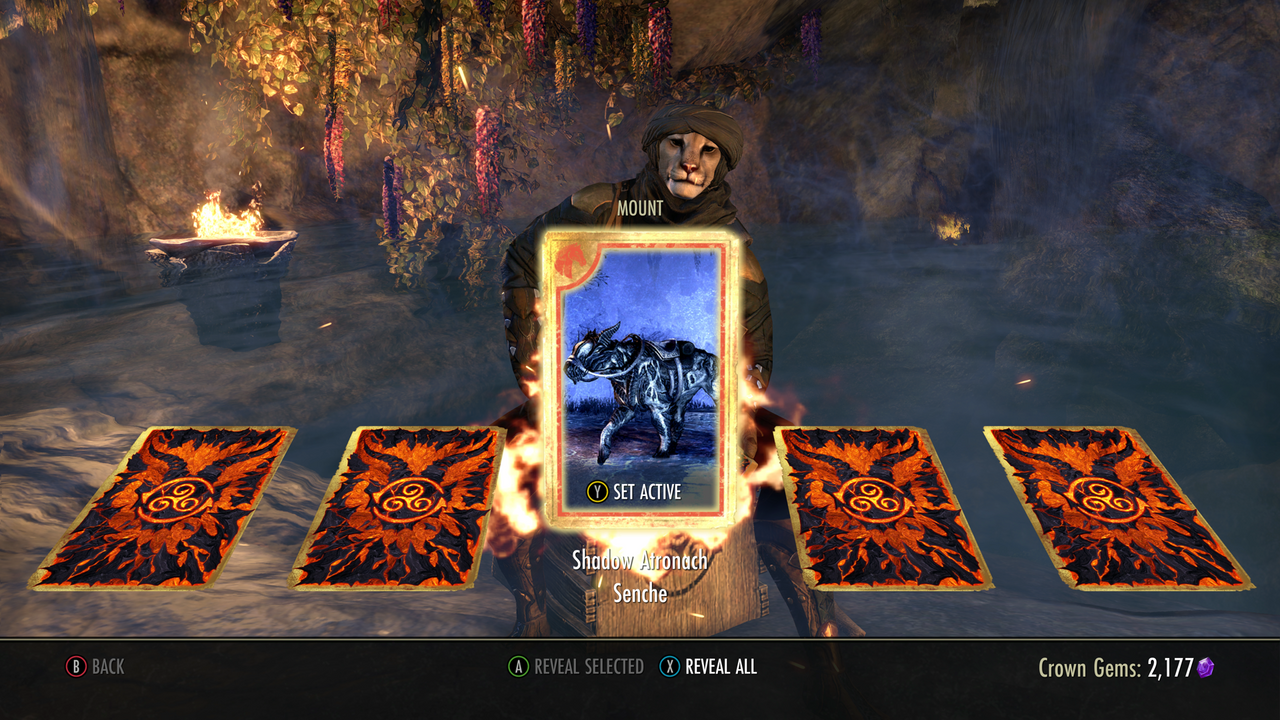 Edited by Marginis on August 11, 2018 1:44PM
@Marginis on PC, Senpai Fluffy on Xbox, Founder of Magicka. Also known as Kha'jiri, The Night Mother, Ma'iq, Jane Shepard, Damia, Kintyra, Zoor Do Kest, You, and a few others.
#1 August 2018
3 Quote
Home Forums Crown Store & ESO Plus
Sign In or Register to comment.