paulsimonps
✭✭✭✭✭
✭✭✭
So been wanting to make another build post for sometime now, but not had time and also I didn't want to post it until I got it 100% finished. It now is finished. Its my new Pact Dragon Tank, now as many will quickly see it contains things that are very commonly used, the point of this thread is to show my personal spin on it and explain why I made the choices I did with my build. So to start it off here are the main stats of the build and what gear I use. 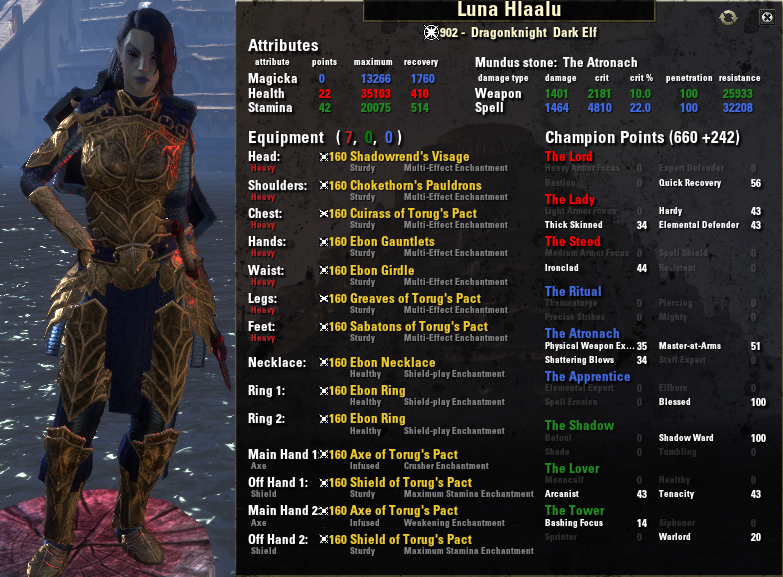 As you can see I use a combination of Torug's Pact, Ebon Armory and Chokethorn+Shadowrend. I want to say quickly that I love the fact that the Chokethorn and Shadowrend combo have gotten more popular, have been running it for a LONG time now and at the start people called me stupid for using it. The reason behind my choice in Monster set pieces is the added support I can give with that much extra magicka recovery, I can use my Chains more, my Talons, my Igneous Shield. As well the fact that I can use my igneous shield more often helps the survival of others during AoE Boss mechanics and helps me sustain better with the Helping Hand passive. Many others use Bloodspawn and Lord Warden or even Chudan but I feel that the support I can give with this shines over that, Bloodspawn is only good if you have a really good warhorn rotation(a lot more than just going in a set 1-2-3-4 rotation), and Lord Warden is only good if the others are close to you, but it is much better now with its increased radius and is a solid choice.

Next up is Ebon Armory, the corner stone of any Tanking duo in Trials, gives everyone more health and adds to their ability to survive better. And as we all know "A dead DPS deals no Damage", so this should not need any more explanation than that. Torug's Pact, the last set bonus in my set up. With Infused weapons the Crusher Enchantment when wielding Torug's pact gives the target a 2740 spell and physical resistance debuff for 5s, and this is with a 3.5s cooldown. You can if you are focused and skilled, get basically a 100% up time on that. Now the obvious question is, why not Alkosh? I used to run Alkosh, but with the changes to Torugs and Infused to be as strong as they are I feel the reliability of Torug's out weighs that of Alkosh. Alkosh is a 3010 debuff for 10s but requires that you use a synergy, and with the unreliability of synergies in the game right now the up time is usually pretty low on that. However as I have discussed with others having an off tank run Alkosh and a DPS as well would be more preferred, that together with a main tank set up like this with Infused Torug's would give amazing up times on both debuffs, resulting in higher penetration in total. As well a skilled Torugs user can also get a nice up time on a very strong weakening enchantment too.

When it comes to my Enchantments and Champion points it is based on getting a well rounded mitigation base and strong sustain. I wanted at least 20k stamina, cause it helps a lot with sustaining, but also didn't want my magicka or health to suffer too much from this either, that is why I chose to use 7 Tri-glyphs. A nice and stable 35k Health as well, I know current meta has many run a lot higher but I still feel that this is enough to do basically anything, and since I am a Dunmer I can't get it that much higher. And no I am not a Dunmer out of Min Max reason, but I will come to that later. My Jewelry is also set to be all block cost, as well I use 100p into Shadow Ward that combined with skills and passives gets me to a block cost as low as 88 stamina. That low of a cost combined with Helping Hand, Constitution and Synergies gives really good sustain, you will always be able to block when needed. I also have my Champion points set so that I get the some good passives, such as the Tactician Passive in the Atronach tree, which when combined with Major Evasion can help with off balance up time.

Before I go onto my skills I will like that add and some somethings that I have not shown yet that effect my stats. First off, this is shown with my Hardened Armor activated, so my Major Ward and Resolve are active. My Drink is also active which is Orzorga's Red Frothgar, it gives 5000 Health and 457 magicka recovery, a solid and underrated food/drink in my opinion.

This is my front bar that I spend most of my time on, got everything I need to tank almost anything, I supplement it well with my back bar, to quickly list my skills on the front bar:

This my first back bar, note that many of these skills are what most people call flex skills, skills you can swap out depending on the situations, for example Unrelenting grip is useless on a boss fight with no adds or unchainable adds. To again list them all:

And lastly, my most common back bar during boss fights without adds, adding the Elude to help out with Off balance as we noted earlier in the thread. And of course here is the list:
So in short, my set ups are based on helping with buff and debuffs as well as Crowd Controlling as much as possible. Now some of you might as about my back bar ultimate, this is mostly never used but however having it slotted on my back bar gives me 10% extra magicka recovery while on that bar cause of the Magicka Aid passive in the Alliance War Support skill line, this is even stronger if you off tank in Maw or something and use Guard as well, gives 10% per Support skill, so 20% with the ultimate and Guard.

Now if you guys want more info about my set up feel free to ask, I tried my best to not just show my build but to explain it as well, but didn't really know what to say about the skill choices as much as the gear choices. So if you want to know more about it or have critique then by all means comment below. One should do more than just show of the builds, one should explain why the choices were made and how things work around it. I hope I did that well, also hope you like my build, first one in a long time that I have posted.

EDIT: Right after I posted it I remembered this.... I know I am not a Vampire but I highly recommend that you are, only reason I am not while I am making this is cause I take it off every now and then cause I get sick of looking at the skins or the vampire forms. The added magicka recovery and mitigation is really helpful, as long as you can stand the vampire form or the skins you should definitely be a vampire.

As well I forgot to add, I am not a Dunmer for min maxing reasons, its cause I like Dunmers, the race you should pick if you want to min max this build is Argonian or Imperial, if I had to pick a #3 and #4 it would be Redguards and the Nords.
Edited by paulsimonps on September 14, 2017 8:28PM
PC-NA-EP
Luna Hlaalu - DK TANK
Officer of Fear is Failure
Full Explanation of Damage Mitigation
Buff and Debuff List
#1 September 2017
3 Quote
Prev12Next
Home Forums English Combat & Character Mechanics
Sign In or Register to comment.