In this abstract, I will take a look at some class defining abilities in order to determine how class balancing can be improved. It is a bit of a read and think, but once you understand the points below you might get a better understanding of esos combat and why it is imbalanced.

First of all, it is important to understand how Base damage calculation works:

The core formula for most abilities in ESO looks as follows:

So basically a simple linear regression with two independent variables that determine the variation of the Base damage.
Knowing this, we can get into the abilities that define differences between classes. Every class has access to a ground area of effect and all but sorcerers have access to a spammable ability that was originally intended to fill the gap between your damage over time abilities.

Let’s look at the five ground AoEs and their slope coefficients:

It is visible that both Blazing Spear and eruption have an initial hit applied at every cast of the ability. So in order to determine the overall damage we get from these abilities, we need to divide the initial hit by the duration of the skill, because we usually want to cast these only when they run out. The damage over time portion is calculated as dps already, as all the above skills tick once per second.
Now assuming a Value of 40000 for Maximum Magicka and 2500 for Spell Damage, we reach the following values for the damage per second:

When comparing the above values, we can see that eruption does by far the least damage per second, with less than half of what liquid lightning does. So this already indicates a discrepancy between the separate Ground AoEs, so adjusting the value of eruption seems to be a good way to increase the dps of a magicka dragonknight. Ground AoEs are easily avoidable in PvP and therefore do not affect PvP negatively in general.

For blazing spear I added the coefficients of burning light. It can proc once ever 0,5 seconds with a 25% chance, therefore we have an average damage of 0,25*9/8*Base Damage per cast of blazing spear, adding about 500 dps. Now this is just the Base damage, without critical hits and class passives. To facilitate the calculations I assume that passives are pretty balanced between classes in general, or at least do not lead to a significant bias in this testig environment.

Now this assumes that you recast these AoEs only when they are running out. Problem with that is that you recast many of them early to fit their duration to your elemental blockade (there’s another problem: a lot of durations just don’t fit to other dots).
The Abilities you recast early are usually Liquid lightning, Winter’s Revenge and Twisting Path,so changing their durations to 8 seconds leads to:

Now these values assume that Eruption isn’t bad and Twisting Path and Winter’s Revenge are worse, but the translation into a real DPS parse is that eruption just does a lot less damage per second throughout the fight. It is just fairly cheap for the overall damage it does. But what matters is DPS, and in that regard, eruption is a lot worse than the others even if we adjust their duration to 8 seconds: 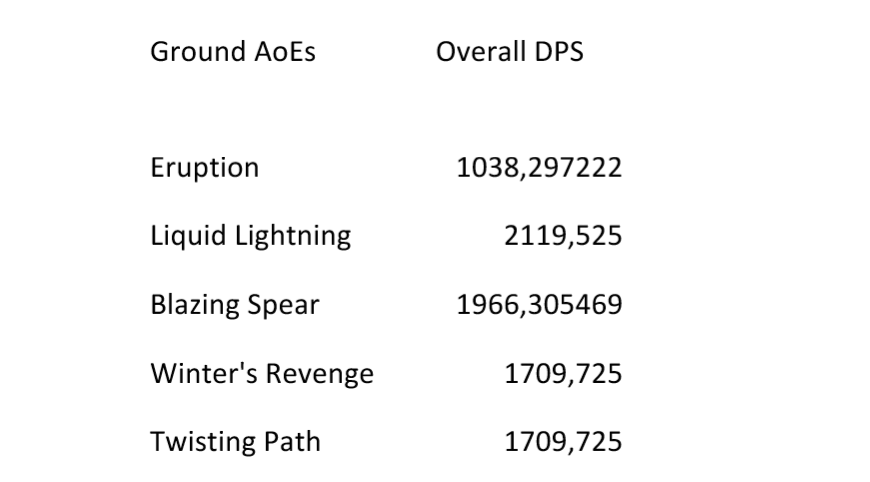 In a parse, it will do about half of what liquid lightning does. The longer duration of it might be handy from a sustain standpoint, but in comparison to the others, it is still weak. So what I would suggest is that the damage over time component of eruption can be increased by at least 35%, so that it gets magicka dragonknights closer to the other classes ground AoEs. Blazing Spear is actually fine. Winter’s revenge could still use a 20% buff in order to help magicka wardens reach more potential.
The second aspect I wanted to look into are spammable skills. There are some differences, especially regarding the damage of puncturing sweeps and the cost of funnel health that are completely imbalanced. Four classes have a spammable built in, for sorcerers I used force pulse, which is competing with the other four on all classes, so it makes sense to include it anyway.
Using the same formula as above, we get these damage values per cast of the respective spammable skill,

We can also notice that there is a significant difference in cost between those skills. Especially puncturing sweeps and funnel health stand out.
But how much Base damage per cast do these give you, assuming the same stats as above?

Even after adding the average damage contribution from burning light to the damage of puncturing sweeps, the damage in a single target environment is very weak when compared to the rest of the Spammables. I understand that the skill has significant cleave damage attached to it, but the cost is unjustified, as it does about 50% less single target damage than the rest while draining a significant amount of Magicka while having a cast time of more than one second. Funnel health hits hard, is really cheap and heals you on top of it.
Now don’t get me wrong, I don’t think Funnel health is too strong, I think the rest of the Spammables are underwhelming in terms of what they cost. To verify that, I’m going to show the damage per point of magicka spent again:

So in order to balance these out, I suggest the following steps:
1. Increase the original damage of puncturing sweeps by 50% and reduce cost by 40%. This skill is melee, misses a lot and doesn’t hit as hard as the others. Reduce the cleave value to 100% from 140% to compensate .
2. Decrease the cost of molten whip by 40% and increase the damage by 20%. It is single target only, melee and doesn’t do significantly more damage than Funnel health.
3. Decrease the cost of screaming Cliffracer to 1891 to match Funnel health. It hits harder but is delayed, is now dodgeable and doesn’t heal you as much.
4. Decrease the cost of force pulse to 2431. This Spammable is probably the strongest due to the range, triple hit, status effect chance and cleave+interrupt it can provide, so it should be the most expensive Spammable.
What will this mean for the Spammables?

Why should molten whip be the strongest and cheapest spammable? Because it is limited to a single target melee ability that you cannot always cast reliably. Spammables are usually not that dangerous in PvP (now that Cliffracers are avoidable), which is why I think adjusting them this way should lead to a more light-attack oriented combat system in Combination with the current PTS changes. Will it happen, probably not, but I think that zenimax would make a lot of players very, happy by introducing these changes.
Puncturing sweeps misses a lot as it doesn’t have the “on target only”-restriction, so making it cheaper and hit harder should make playing a in melee as magicka templar more forgiving and rewarding.
@ZOS_GinaBruno, @ZOS_JessicaFolsom, you might want to shoe this to the combat design team, maybe @Wrobel?

EDIT: also, I know that @Gilliamtherogue suggested something similar on one if his streams...