Home Forums Player Guides
Sign In · Register
The PlayStation® Network service interruption has been resolved. Thank you for your patience! 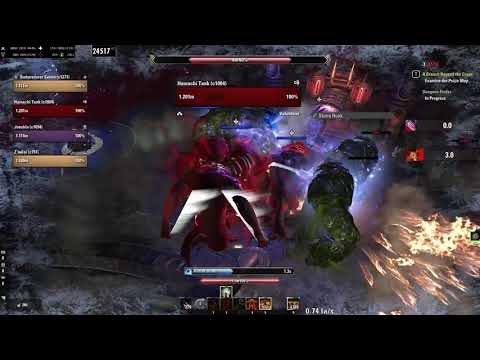 For those that did Stone Garden on hardmode, the werewolf behemoth phase is definitely one of the hardest part of that fight. Essentially, during this phase, the party needs to kill 4 Stone Husks that spawns using the Werewolf Behemoth Transformation, and this phase repeats twice. This phase is quite hard due to the various mechanics present: Each of the Stone Husks needs to be interrupted when they use the Caustic Cannoade ability with your third skill, the lightning balls on the ground needs to stomped with your fourth and they have a huge damage ability that will most likely kill you if you allow of any of them to be near each other. And all of this is in additional to the Murderous Mark mechanic active during the second time this phase occurs which requires you to swap taunt. Thus, the current widely employed tactics is just to take them apart, and deal with each of them separately (An excellent example of this can be seen in @code65536's video)

However, the best way we found is to approach this much like a traditional AoE fight, and simply pull all of them together. This strategy relies mainly on the mechanic that your ultimates are preserved when entering the behemoth form, and thus, all you have to do is simply hold your ultimates in the first and second boss phase, and you would enter the behemoth phase with an ultimate ready to go. Only the two DPS have to do this, as two ultimates are usually enough to kill them, the healer and tank are free to use their ults.

From there, all you have to do as a group is to gather these behemoth up, which is quite easy since you would just taunt each one, and then run over to the center. As they are moving, you can use the fifth ability to get the heal over time and charge up the ice breath, and once they gather up, use the third ability, and then the ultimate, which resets your third ability and you use that again. Press any synergy when they come up, and frost breath once it's finished charging, and these, along with a few light attacks are enough to finish them.

Doing it this way skips all the mechanics almost entirely: the damage that they deal to you whilst grouped up are not significant enough to kill you over this very short period; since you are essentially using your interrupt twice during this time, they woudn't be able to fire off any Caustic Cannonade; the lighting balls will barely have enough time to finish charging and the taunt swap mechanics won't last enough to actually kill you. And of course, since you are essentially kill these 4 at a time, this makes the speedrun achievement much more managable.
Edited by zbzszzzt123 on August 28, 2020 8:22PM
#1 August 28
0 Quote
Home Forums Player Guides
Sign In or Register to comment.