How to Fix CP, easy and balanced

Gnortranermara
✭✭✭✭✭
✭
So I've been thinking about the CP system fix that's underway and realized that there's a simple and easy way to make CP awesome and balanced.

First, note that the CP constellation names correlate with the Mundus Stones (except the Serpent, which was excluded from CP). Next, note that most of the Mundus stones give bonuses to raw stats with an associated Major/Minor buff. Therefore, there is an opportunity here to link CP to the Major/Minor buff system. 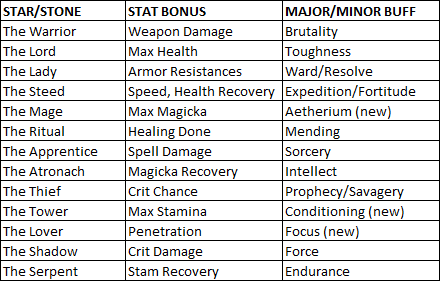 (The new Max Mag and Max Stam buffs are just the Warhorn buffs, given a name. The new Penetration buff would be a sweet new addition to other skill lines like Assassination, bow, Aedric Spear, etc.)

Step 2: Make each point of CP increase the effect of the associated Major/Minor buffs by 1% (multiplicatively, obvs). At max level, a full constellation would double the impact of its associated buffs. (Points go into the constellation as a whole, not individual stars.) It really can be that simple. Balance is easy and already built-in (by how powerful the buffs are to begin with). Yes, some buffs will need a value adjustment, but the total DPS increase provided by this system can be easily matched to the current CP system with minimal effort. The requirement to have the buff active adds an extra layer of skill to build design because the stats are not unconditional anymore.

If each of the 13 constellations has a 100 point cap, then 1300 CP could fill them all. Both Mag and Stam DPS have 3 stats they don't need, so a 1000 CP cap would fill all of the important constellations for a DPS character.

Step 3: As far as additional perks go, Champion perk stars are constantly blamed for performance problems and could be mostly eliminated in favor of some standard, easy to calculate bonuses. For example, at 25 CP, grant a 25% cost reduction to all abilities that grant the associated Major/Minor buff. At 50 CP, increase the duration of the associated buffs by 50%. At 75 CP, grant the associated Minor buff as a permanent passive. (Adjust the skills that used to grant these Minor buffs accordingly.) At 100 CP, get creative and recycle/rework the best of the old CP utility passives.

Step 4: Housecleaning. The interface would need a rework. A little attention would be needed to ensure everyone has ways to access these buffs (from non-class skills, sets, etc).

This rework would fulfill the goals of capping power at a reasonable level, making CP bonuses conditional, and preserving the best utility passives from the old system. Most importantly it would reduce strain on the server if it's done right, since all of these buffs go directly to raw stats when the buff is applied, prior to conducting damage calculations (instead of being a bunch of extra percentage-based modifiers rolled into every single damage calculation).
Edited by Gnortranermara on September 24, 2019 5:50PM
#1 September 2019
4 Quote
Home Forums Public Test Server
Sign In or Register to comment.