Home Forums Player Guides
Sign In · Register
Maintenance for the week of May 10:
• PC/Mac: No maintenance – May 10
• ESO Store and Account System for maintenance – May 11, 4:00AM EDT (8:00 UTC) - 12:00PM EDT (16:00 UTC)
The Blackwood Chapter and Update 30 are now available for testing on the PTS! Read the full patch notes here: https://forums.elderscrollsonline.com/en/categories/pts/

code65536
✭✭✭✭✭
✭✭✭✭✭
Someone recently messaged me asking for tips on the Relentless Raider achievement, and I thought I'd post my response in public so others can see.

You need to get hard mode, no-death, and speed-run all in the same run. But the only real challenge is the no-death: the speed requirement is very generous. As a point of reference, our Relentless Raider run clocked in at 25 minutes. We had a comfortable 5 minutes to spare despite stopping to loot chests and even at one point pausing to clear inventory! So there's no need to rush into things recklessly. Play it safe and go with strategies that result in consistently clearing an encounter deathless, even if such a strategy may be a bit slower.

In going for this achievement, as soon as someone dies, we would wipe and reset the dungeon. And we initially had a high number of resets on Icestalker, which is surprising since it's the first boss. The problem is the ice wraiths. Their Skeletal Smash will CC a player, and since the player doesn't gain CC immunity afterwards, it's possible, if you get unlucky, to get chain-CCed and not be able to do anything for several seconds. And if our healer got chain-CCed, they often ended up dying. There is a strong element of luck here, but just throwing up our hands and saying, "well, we got bad RNG, time to reset" isn't very satisfying.

Our strategy here is to have the tank cast Guard on the healer, for us to stagger and time our ultimates so that we clear out the wraiths quickly after they spawn, and for us to use an AoE CC ability (Time Stop). After these changes in strategy, we had virtually no resets on the first boss.

The strategy that we used was to essentially run two tanks on this fight. Those empowered ricochet waves can hit for 25K. Taunting is of very limited use since people are stacked for the sweeps. Ranged interrupts are of limited use because you can't reliably target them if they are behind the boss, and even the regular ricochet waves are pretty spicy. So we had our healer run high health (any healer who has healed vAS +1 Felms or vAS +2 should have a high-health setup at their disposal) and cast Guard on one of the DDs and the tank will cast Guard on the other DD. We almost never had any resets on the Vault Protector.

There's a lot that spawn in Hard Mode, and the fastest and most reliable way to dispose of them is to knock them off the platform. Sure, you can kill them via traditional means too, but that just takes too long.

Not all knockback skills have the same knockback range, though. If you have a Templar in your group, they need to slot Javelin, since that is hands-down the most effective skill at knocking them off. Stamina DDs can use Draining Shot, which is not quite as effective. And magicka DDs are unfortunately stuck with Flame Touch, which has the shortest knockback range and is noticeably the least effective (but better than nothing).

Our healer used Javelin, and one of our DDs slotted Flame Reach as backup.

After trying both, we decided that we preferred killing the fire arm first. The Whipping Bolts are easily dodged, and if you don't have eyes on the blade arm because you are focused on killing the fire arm, a callout from either the tank or the Combat Alerts addon will help.

We had the healer run high health and taunt the centurions (and dodge the heavy attacks). Most groups will have the tank taunt the centurion, but, again, we are focused on minimizing risk, and with this fight being particularly taxing on the tank, we concluded that it would be safer to have someone else taunt them. As an added benefit, the centurion can be stacked on an arm that we are killing, whereas the tank is not able to do that.

This is a bit of an unorthodox approach and it might not work well for many groups. But it is an option to consider if tank deaths are an issue. 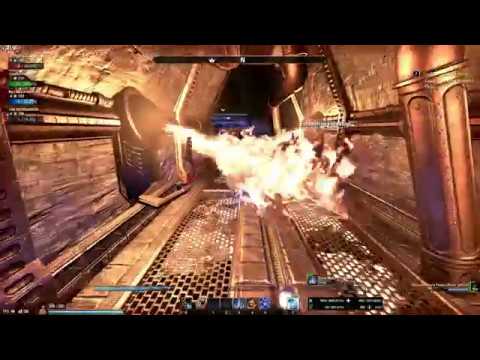 Our strategy is to travel as a single group to disable the first two Shock Conveyors. After clearing the first conveyor, we will make a judgement call: if the first conveyor was close to the starting location, we will return and follow the lighted path to the second conveyor. This is demonstrated in the first Skeevaton phase in the video.

If the first conveyor is far from the starting location, then we still start moving to another part of the map, looking to find a lighted path to guide us to the next conveyor. This is demonstrated in the second Skeevaton phase in the video.

After two conveyors are disabled, we will return to the starting location and split into two groups to disable the final two conveyors. Since there is no need to backtrack and return after disabling the final two conveyors, we can safely split up for these final runs.
Edited by code65536 on March 17, 2019 10:15PM
PC/NA ― GM of Nightfighters
PC/EU ― Member of WipeKings