Argonians losing their resistance to poison (an open letter)

Swergdach
✭✭✭
Immediately say, that I agree with max_only in his thread about the wrongness of the fact that the Bosmer lose their stealth passive.

As for the Argonians: despite the fact that the developers did not mention it in the patch-note v4.3.5, from the comparison of the new racial passives of Argonian and Bosmer it is clear that they decided to divide them by the type of resistance (as well as they decided to divide Khajiit and Bosmer by the role in stealth). But just as in the case of the Bosmer/Khajiit, these changes contradict the lore of the elder scrolls. As with the thieving nature of Bosmer, which is described in previous games in the series and in-game books (as noted in the discussion thread about Bosmer), Argonians have always been resistant to both disease and poison. In addition to in-game books and descriptions of past games in the series, Argonian's resistance to poison is claimed in TESO itself (some examples on the screenshots below), and patch v4.3.5 ruins this, which spoils the player's immersion in the world of elder scrolls online. 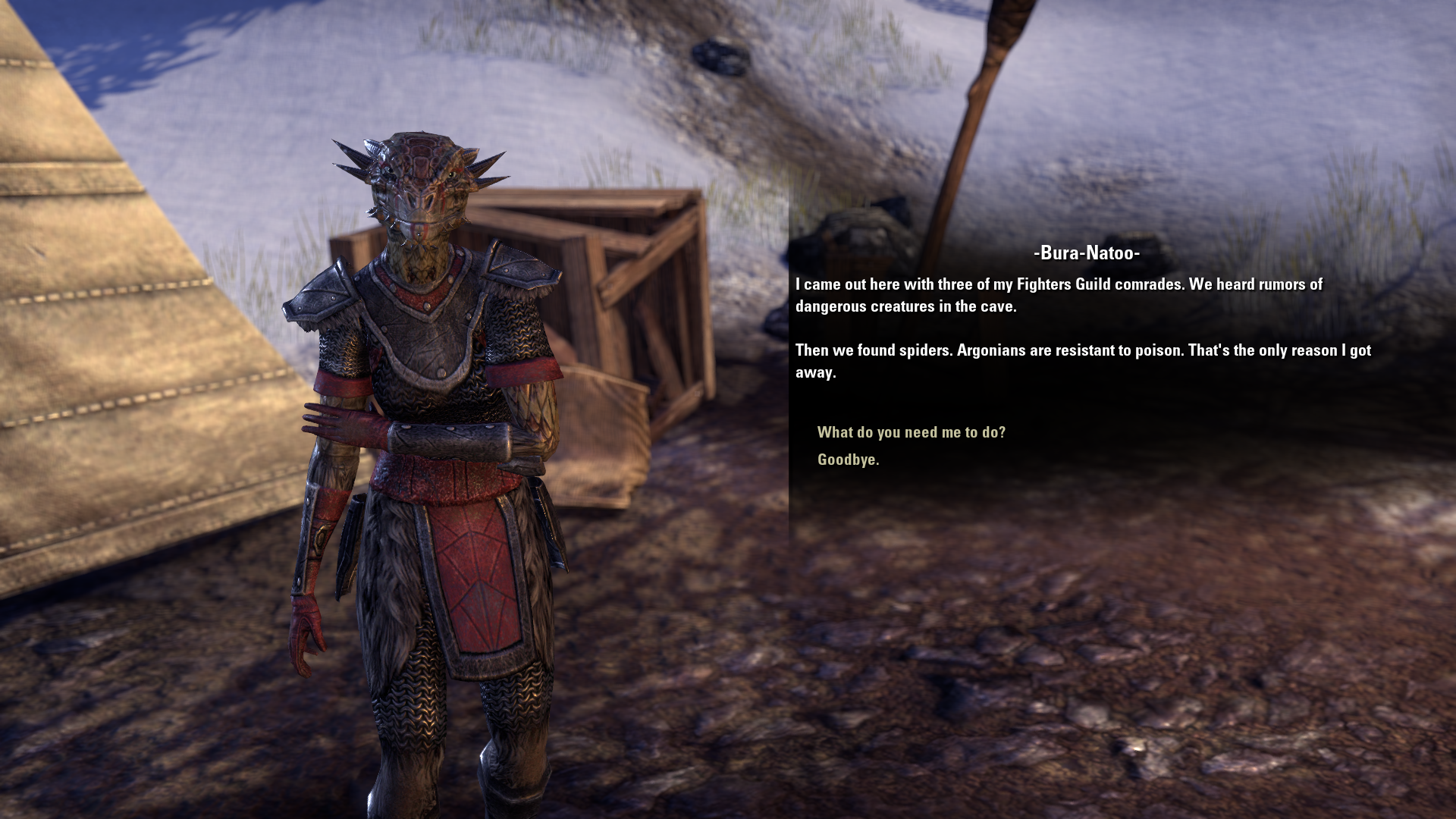 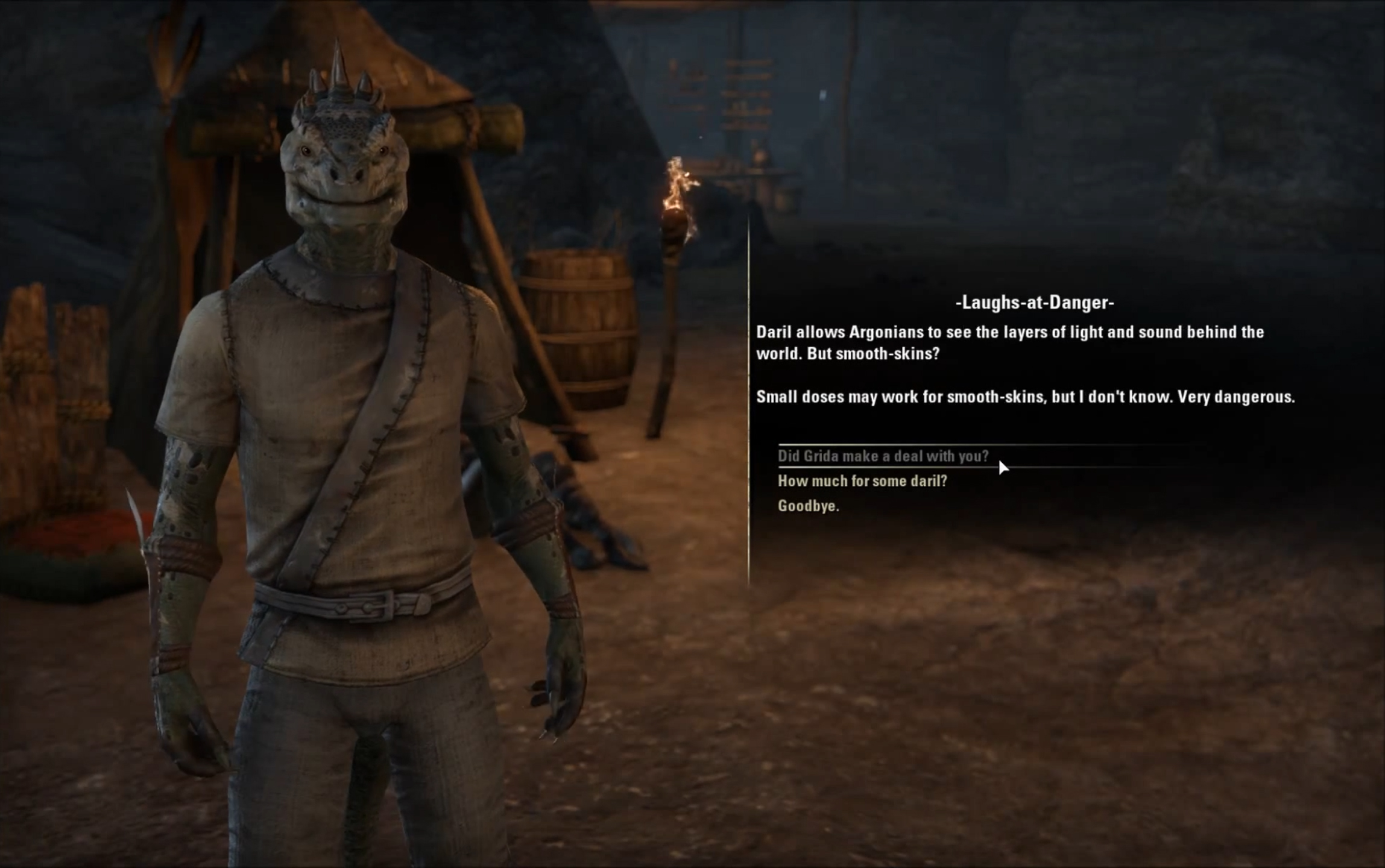 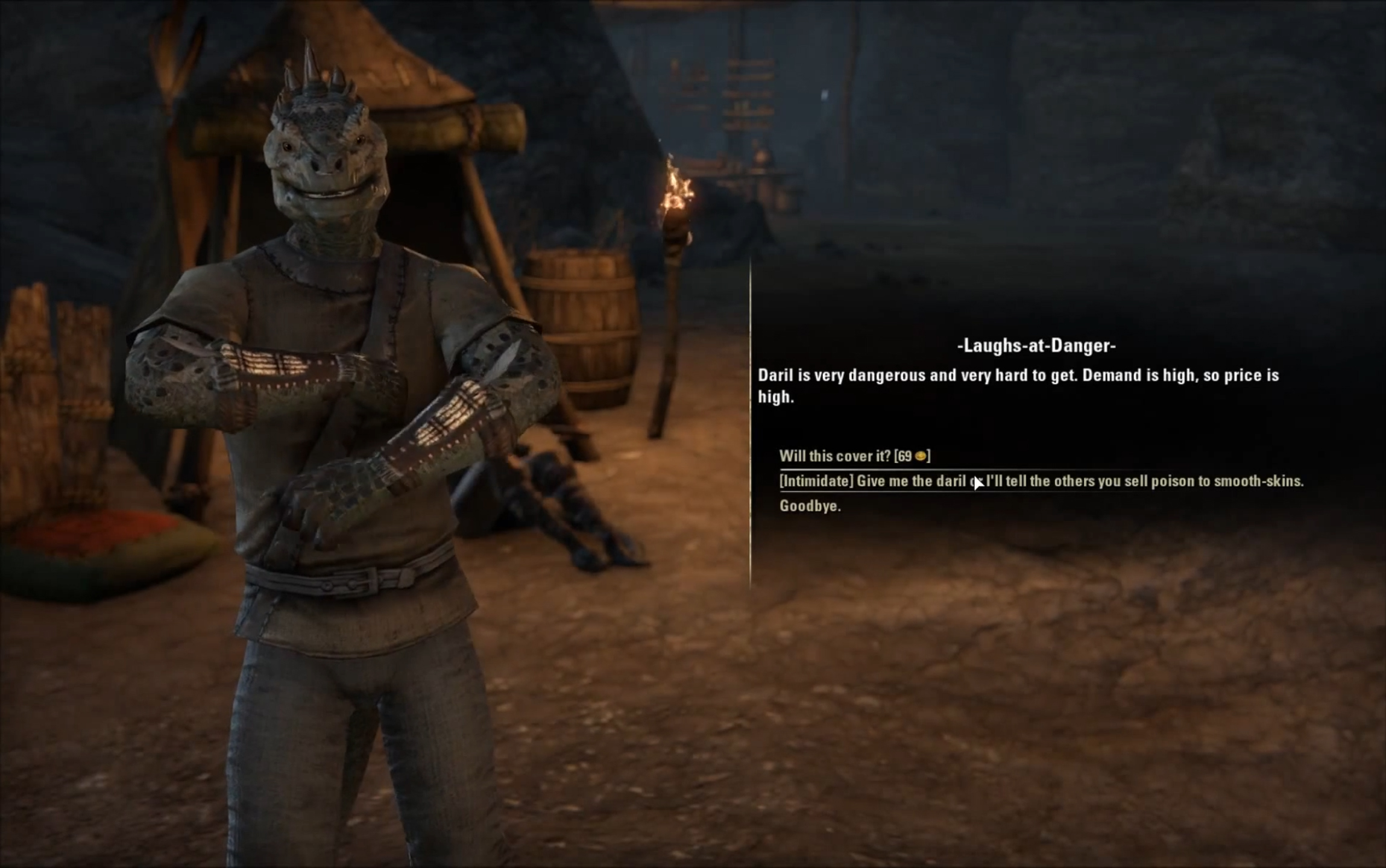 Quest: Welcome Home (Dark Brotherhood story-line). Argonian Green-Venom-Tongue, member of the Dark Brotherhood, talks about the natural immunity of Argonians to poison. He also stating he got his name because he drank so much poison, his tongue is permanently stained green. 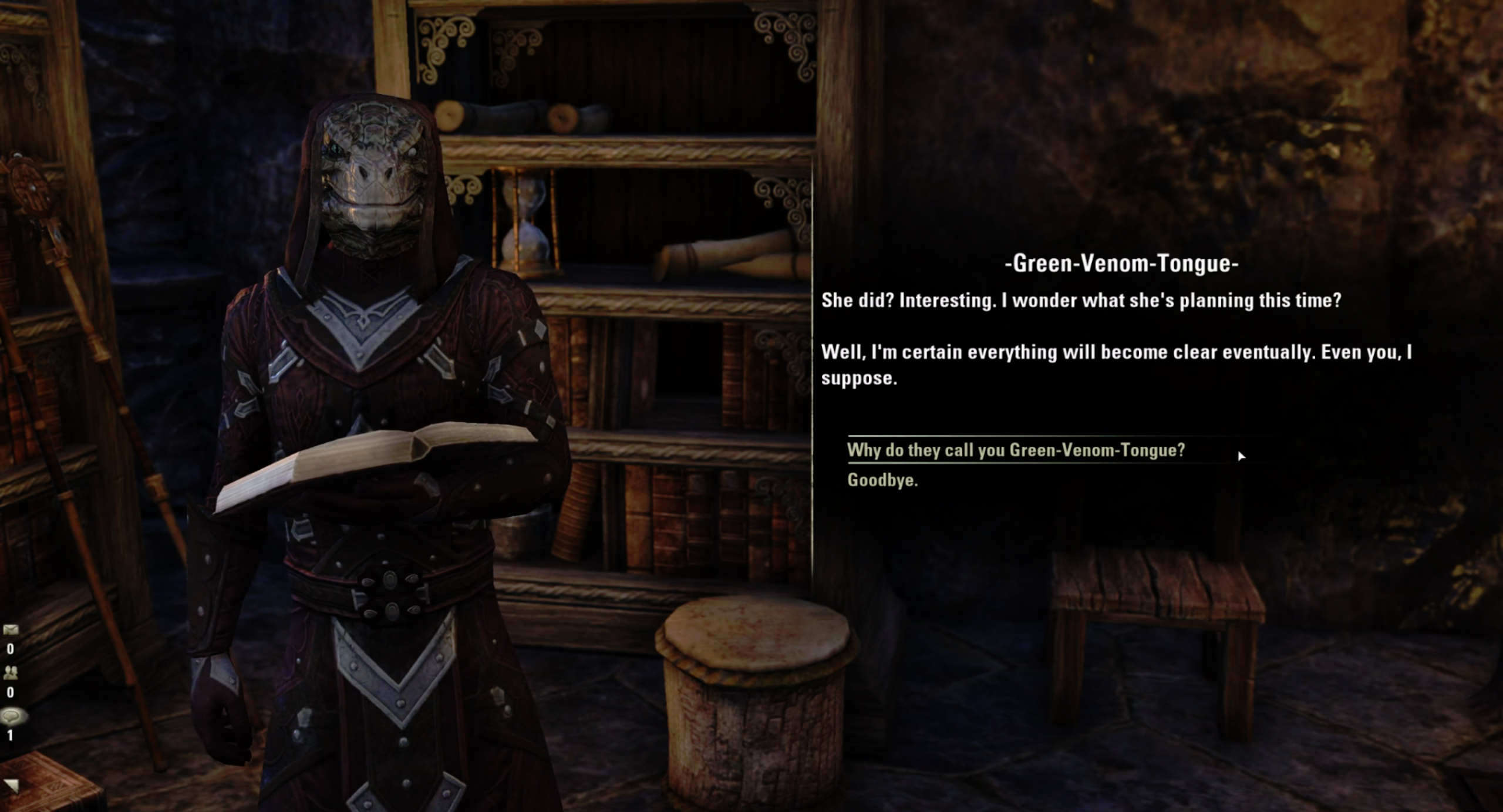 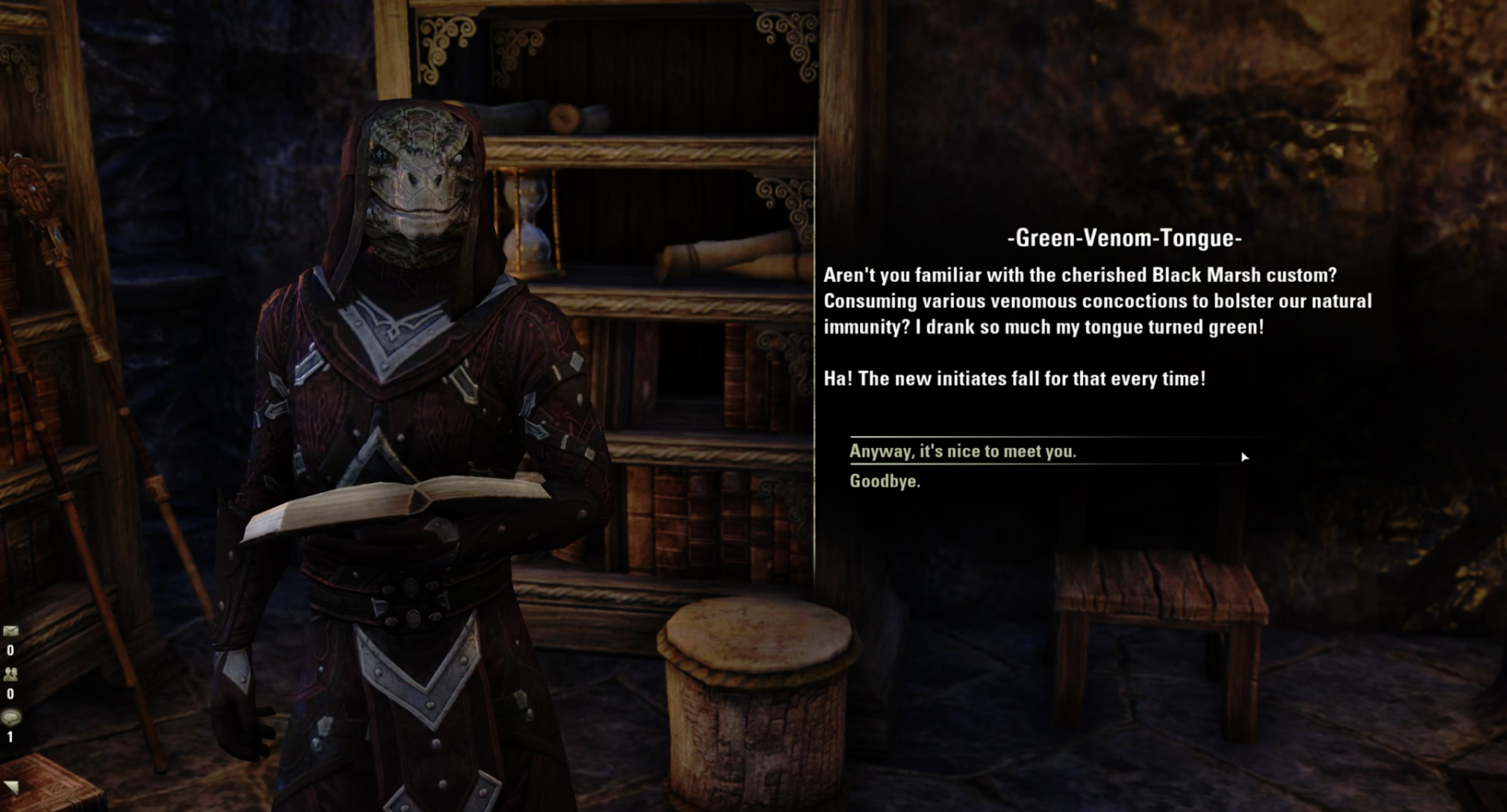 Quest: A Taste for Toxins (Shadowfen, Murkmire Prologue daily quest). Argonian Jee-Lar, agent of Cyrodilic Collections, mentioning about Argonian's resistance to poison in comparison to copper-tongued skinks, which outperform Argonians in this. 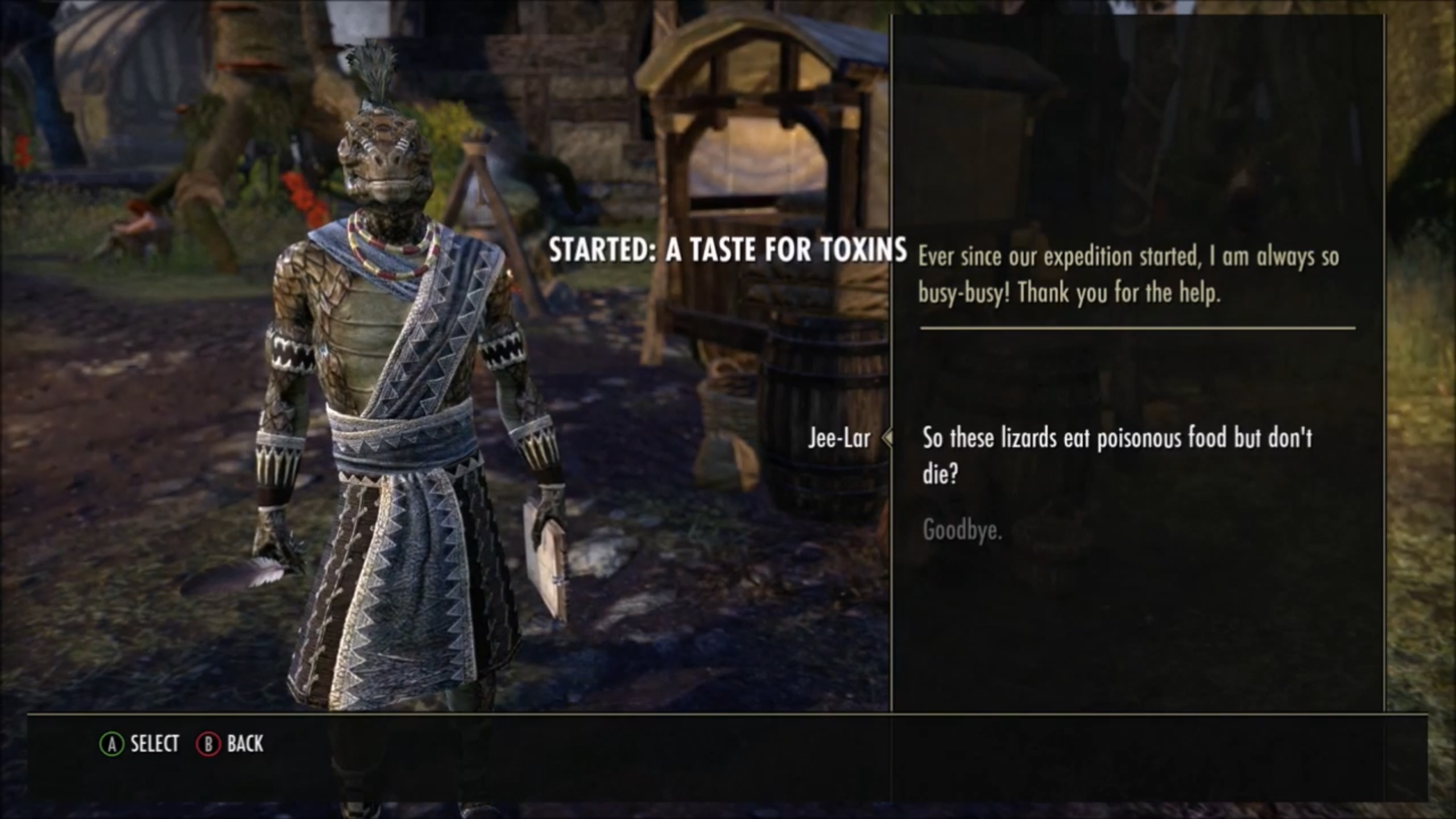 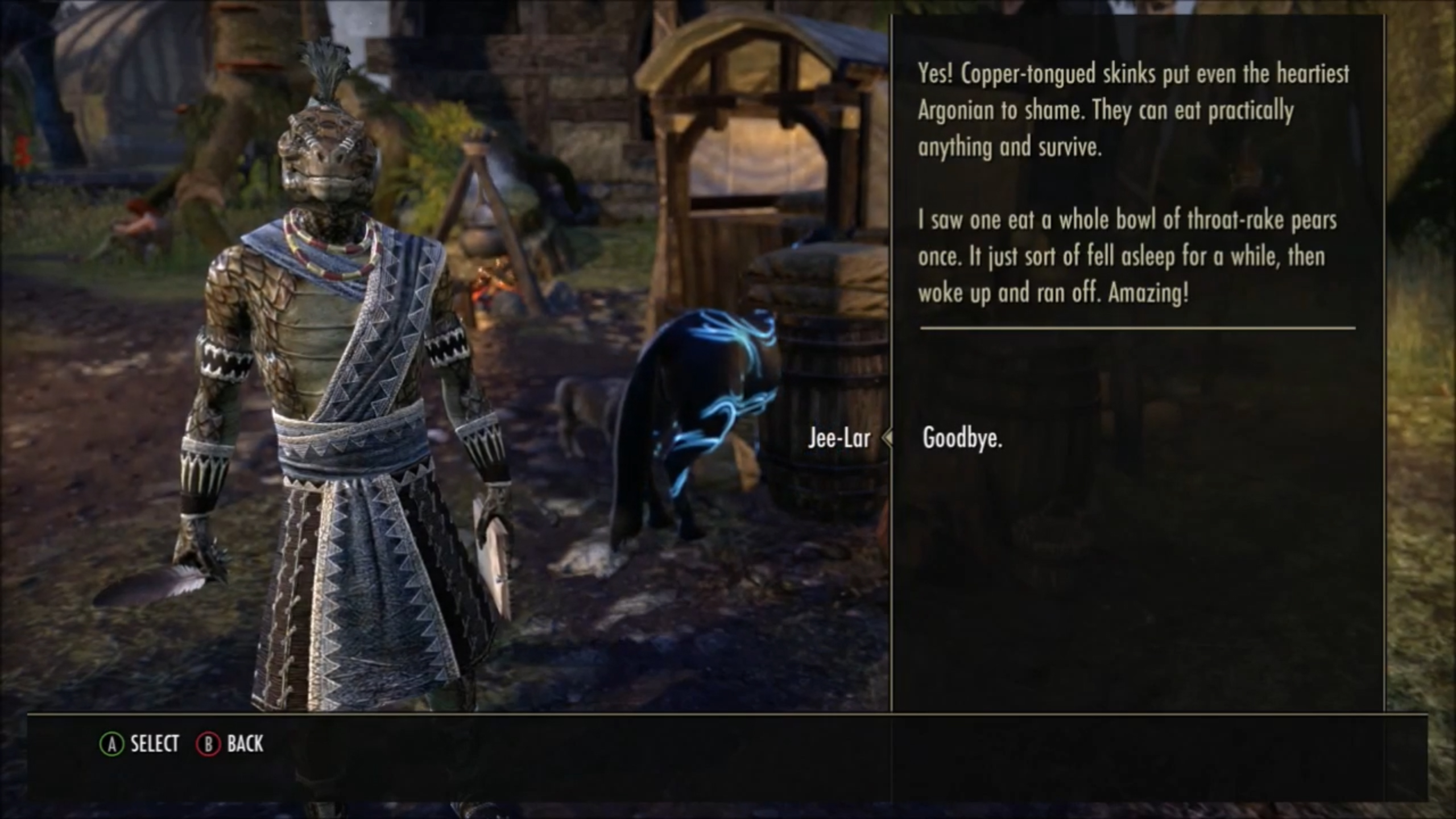 In conclusion, I ask the developers not to turn the game lore into a bargaining chip, and not to consider the people, who care about game lore, as collateral damage from rather radical attempts to distinguish races and give the maximum uniqueness to the races by detriment of the game universe. Thank you.

P.S. I am aware that the lore (as well as quests, story, etc.) is not important for many people nowadays, they play like this: youtu.be/lbJ51AJuR7E If these people are reading this - don't bother, move along.
#1 March 2019
64 Quote
Prev1234Next
Home Forums General ESO Discussion
Sign In or Register to comment.