OUR ESO HOUSES ARE BEING VANDALIZED....Can someone PLEASE help us?

About 2 weeks ago, a player who is in my housing guild [Grand Designs] logged on to find her ESO house [Psijic Villa] completely wrecked. The default permissions on her house had been set to DECORATOR without her knowledge, which granted permission for any player in the game to move all the furnishings in her house. A player came in and pushed all the furnishings down into the floor or up in the sky. Furthermore, all the statues had been arranged in lewd, offensive positions. Since this was the third time I had heard of someone's house being vandalized like this, I put in a help ticket, on behalf of both my guilds, asking for this problem to be investigated. The player whose house had been vandalized also put in a help ticket. We both submitted screenshots of the offensive statues, but no action was taken by Bethesda except they recommended she set her permissions to NO ACCESS for anyone in the game. For me, they recommended that I take the issue I am seeing in my guilds to the forums. 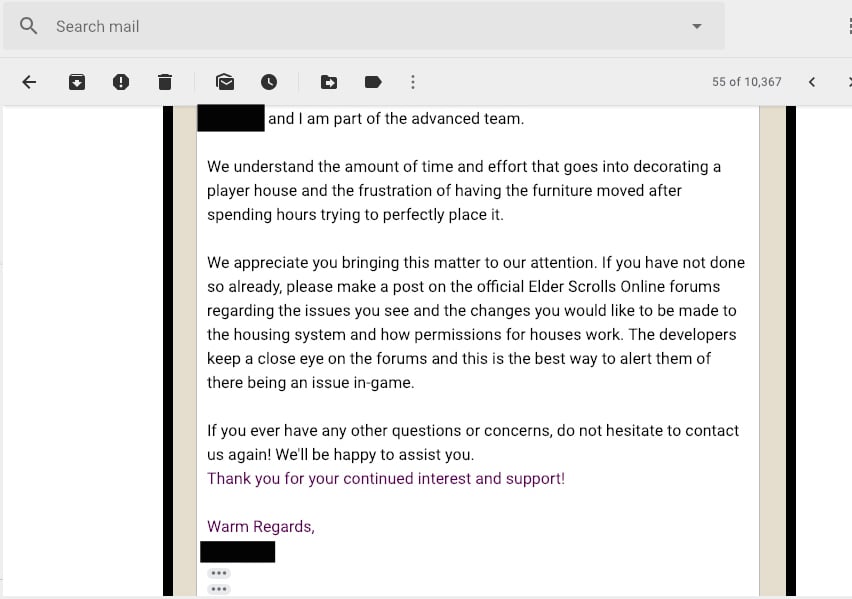 The player who had her house vandalized 2 weeks ago did in fact, set her permissions to NO ACCESS. She then went through the painstakingly awful process of redecorating her house again. It took a long time for her to put all her furniture back in place. She swears she left the settings on NO ACCESS, just as Bethesda instructed her to do. Two days ago, someone was able to move all her furnishings again. They moved the statues back into the same lewd and offensive positions, and all her carefully placed furniture has been pushed into the floor or up into the sky. Completely devastated, she logged off and swore she didnt want to play this game anymore. I dont think her account was hacked, because none of her gold or inventory was taken.

I immediately visited her house, along with several of our guildmates, and all of us had permission to decorate. It was never her intention to give anyone in the game permission to move the furnishings in her house. We spent hours trying to fix her house for her, however most of the furniture was past the invisible walls, or buried beneath the floor and sadly out of our reach. We moved the statues so she wouldn’t have to look at the lewd imagery again. Some of you will look at the image and think its funny, but to someone whose house has just been trashed, this is the last thing they want to see: 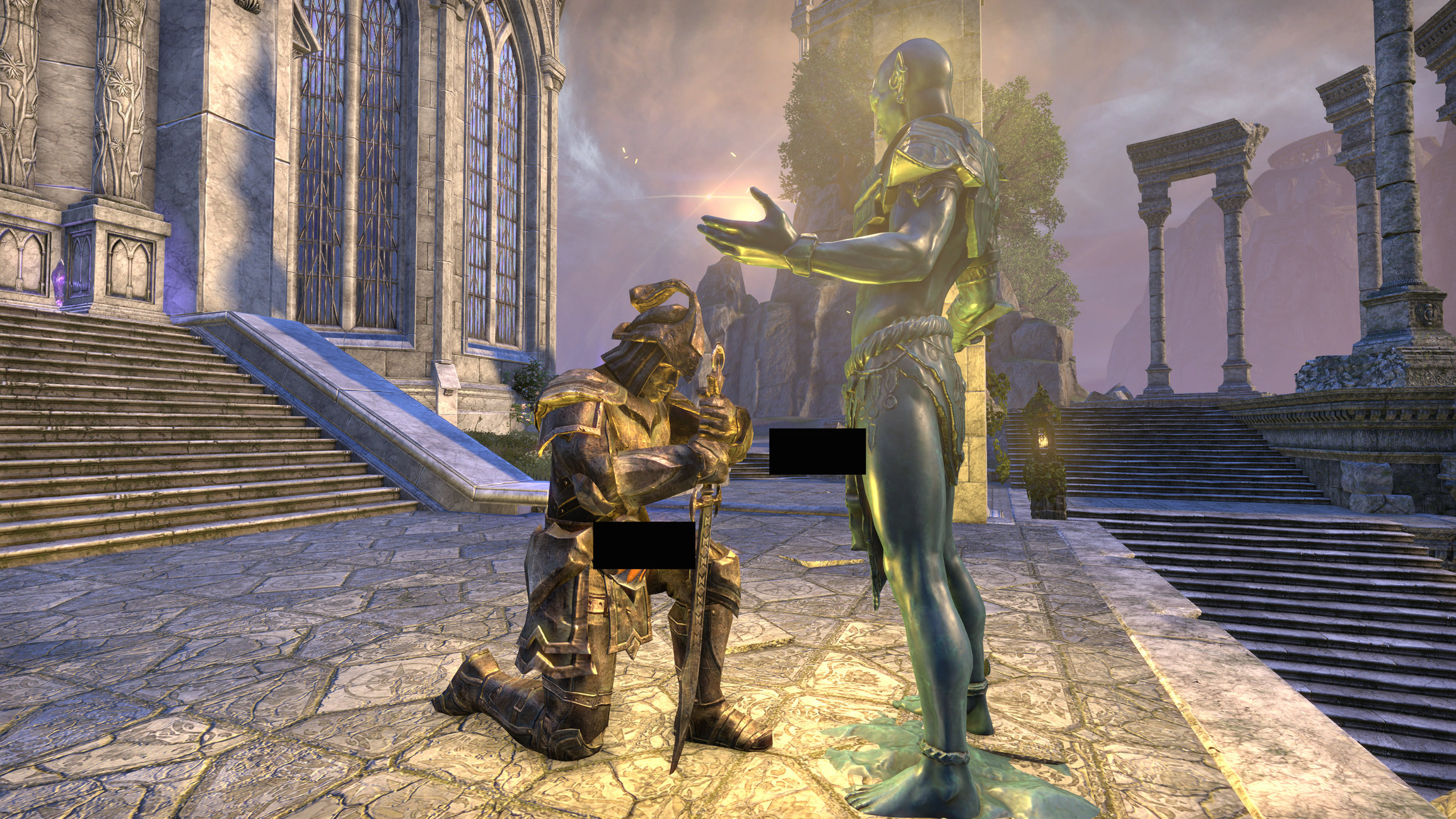 I used text chat and asked everyone in the guild to check their permissions, and sure enough there were additional members who piped up stating they have been having problems with their housing permissions are being changed without their knowledge. Many of these members have been complaining and putting in tickets for months, but nobody has been able to help us.

Can someone please help us? Our houses are being vandalized, our players are being harassed MULTIPLE TIMES with lewd and offensive imagery, and nothing is being done to acknowledge or fix the issue. My original help ticket was blown off, after asking for my ticket to be escalated 4 times, it finally received a response from the Advanced Team and they recommended I post about my issue on the forums. So here I am, posting on the forums. Asking for help on behalf of a player who has now been harassed TWICE and had her ESO house wrecked because her settings had been changed without her knowledge or intent. I am also speaking up on behalf of a community that is watching this glitch occur with increasing frequency, and we are all worried this problem is also going to happen to us.

Many of you are going to jump in and say that this is not a glitch, this is people making mistakes with their settings. It actually doesn’t matter; a game should NOT be designed in such a way that allows a player to make such a devastating mistake. None of the players who had their houses vandalized ever wanted to give players permission to move their furnishings. Imagine being able to accidentally change a setting on a PVP character that made it possible for someone to lose their Grand Warlord rank, and the only response they got from Bethesda was a generic apology and Oh, by the way you will have to grind out that 5th star all over again.

This is what is happening to us. Our settings are being changed without our knowledge or intent, and nobody is communicating with us or helping us solve the issue. We are being left to put all the furniture back ourselves, with no help from anyone in customer support other than an empathetic apology that this keeps happening to us. We need help. @ZOS_GinaBruno @ZOS_JessicaFolsom

Can you please remove the option of setting the default permissions to DECORATOR? If a player wants to give people decorator access, they can add select players or even select guilds individually, and willingly. Then, neurotic players like me could be rest assured that if we have no guilds listed in the permissions tab then there is no possible chance that any player in the game can EVER touch our stuff. The option to set the default visitor settings to DECORATOR should NOT exist. We want all of Tamriel to be able to see the ESO art that is in our homes, but we don’t want people touching our stuff. Lights included.

And finally, can you please investigate and ban the person who did this to my guildmate and friend. To vandalize a player’s house, AND arrange the statues in such an offensive manner, TWICE, is just not acceptable. This is harassment, and I don’t understand why it isn’t being taken more seriously. Bethesda has the power to investigate this, and prevent this person from doing it again.

PS--the person this happened to is one of the sweetest people I’ve ever met. She was as kind and generous as she was a true joy to be around. She bought a lot of her furniture with crowns, using real money. She didn’t deserve this.

*edited for grammar and to tag the community managers
Edited by lasertooth on December 24, 2018 10:38AM
#1 December 2018
76
Prev12345Next
Home Forums English Housing
Sign In or Register to comment.