Nerouyn
✭✭✭✭✭
✭
All furnishings can be crafted or purchased with gold, except 2 relatively small and insignificant ones: an ESO Plus Azura statuette (I'm team Azura) and a Sylvan nixad pet.

Some achievement and luxury vendor items have been used.

Telvanni paintings are typically very expensive - approx 500k gold - so fair warning. I've used 2 but you could substitute something cheaper.

Apart from the exterior looking like a tower of liposuction leftovers - seriously that's what it looks like - being built up a hill, you can see the front door and default lamps and braziers from a great distance. There are also two holes in the walls you can walk up to and look in and only ever see the default furnishings.

That makes it impossible to change the exterior and maintain the illusion of the instanced house being yours. Yay!

If you wanted to furnish the exterior, a lot of the default furnishings are tiny, insignificant pieces like rocks, bushes and little trees which you could replace with more impactful ones.

Besides wanting to make it look pretty, after doing the bath area I thought it might be cool to dedicate each quarter to a different element in colour (or in Elder Scrolls parlance, the primary tonal colours) and theme. Then I thought that would be too hard and abandoned the idea. But it ended up working out that way. 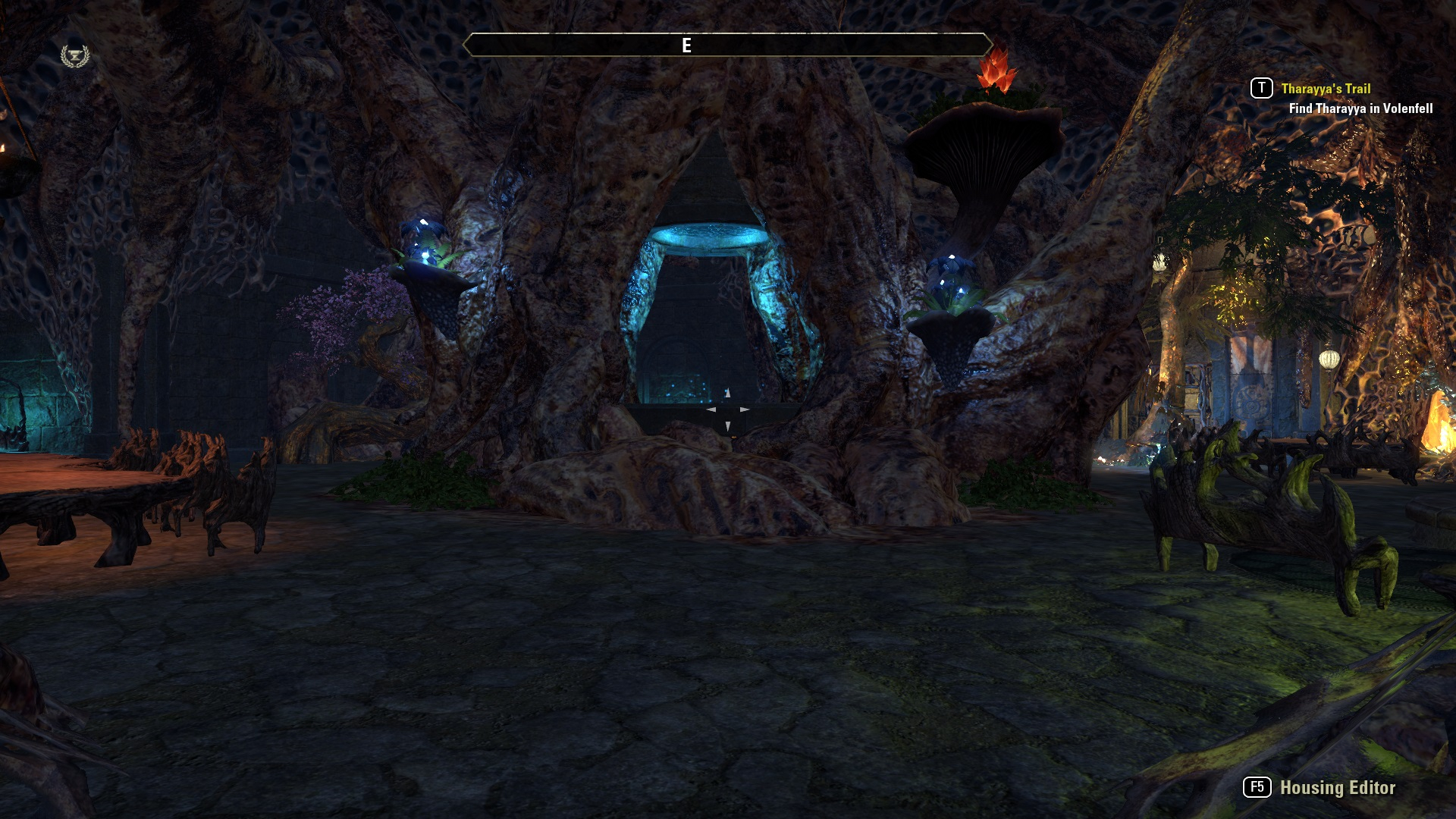 In case anyone's wondering, the big glowing red flower is a custom job. One of the chanterelle mushrooms with a garlas alpinia stuck in it. Some vines in the mushroom. A veiled crystal in the flower. 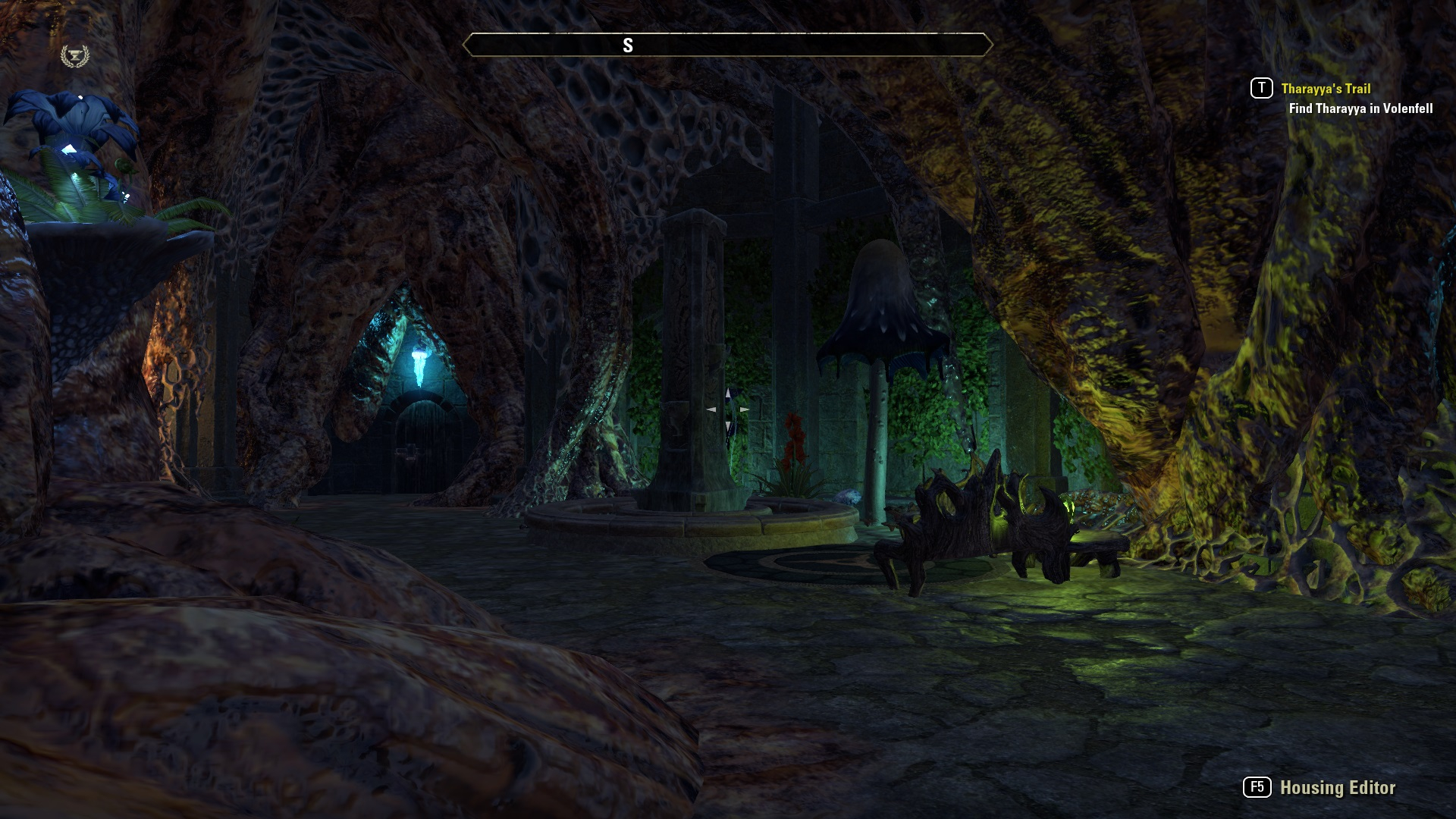 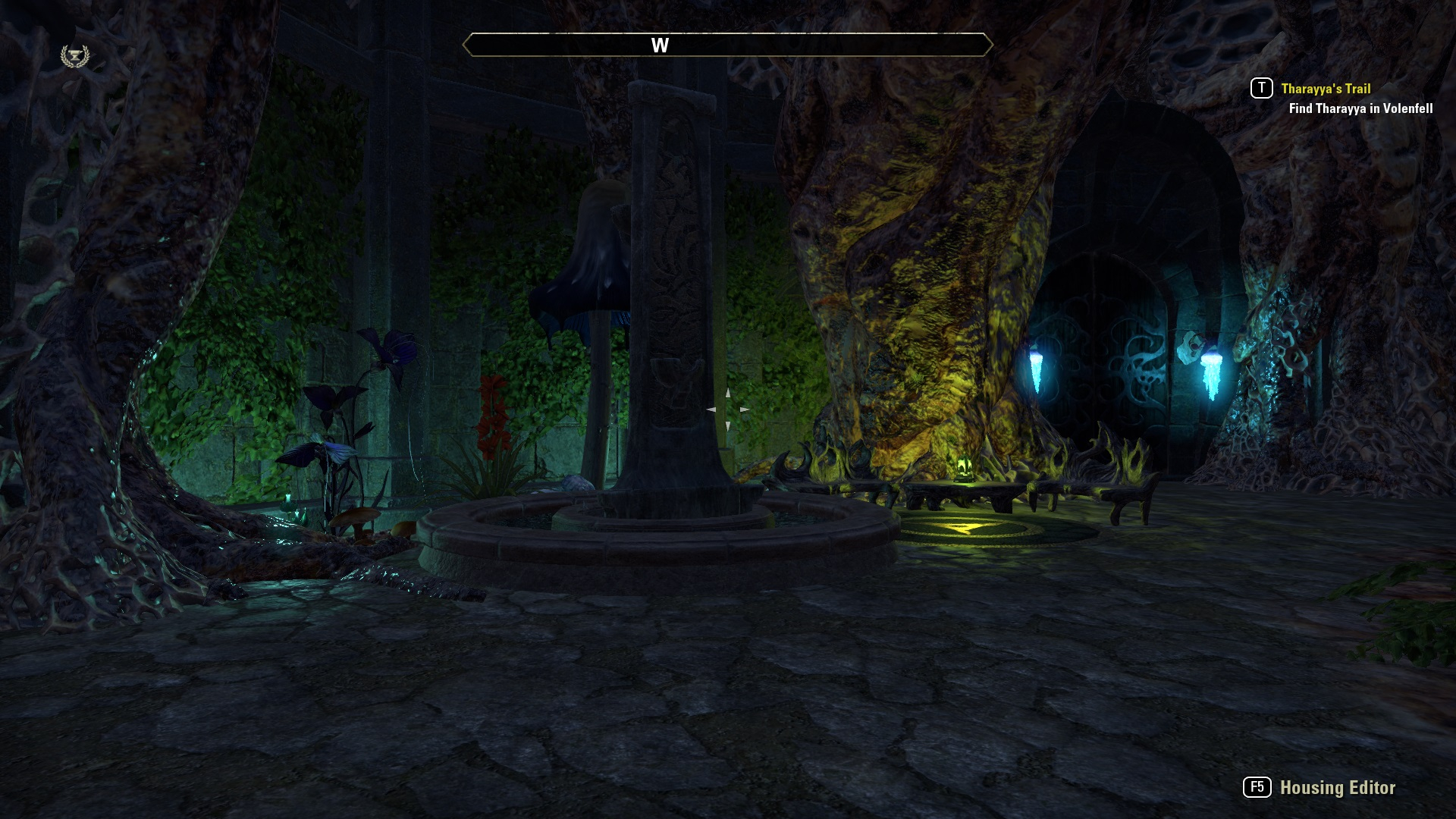 Earth / green. Yeah there's the fountain full of water, but that's made of stone. Plus there's lots of mushrooms and plants. A place for rest and stillness. My indoor garden since I don't go outside. 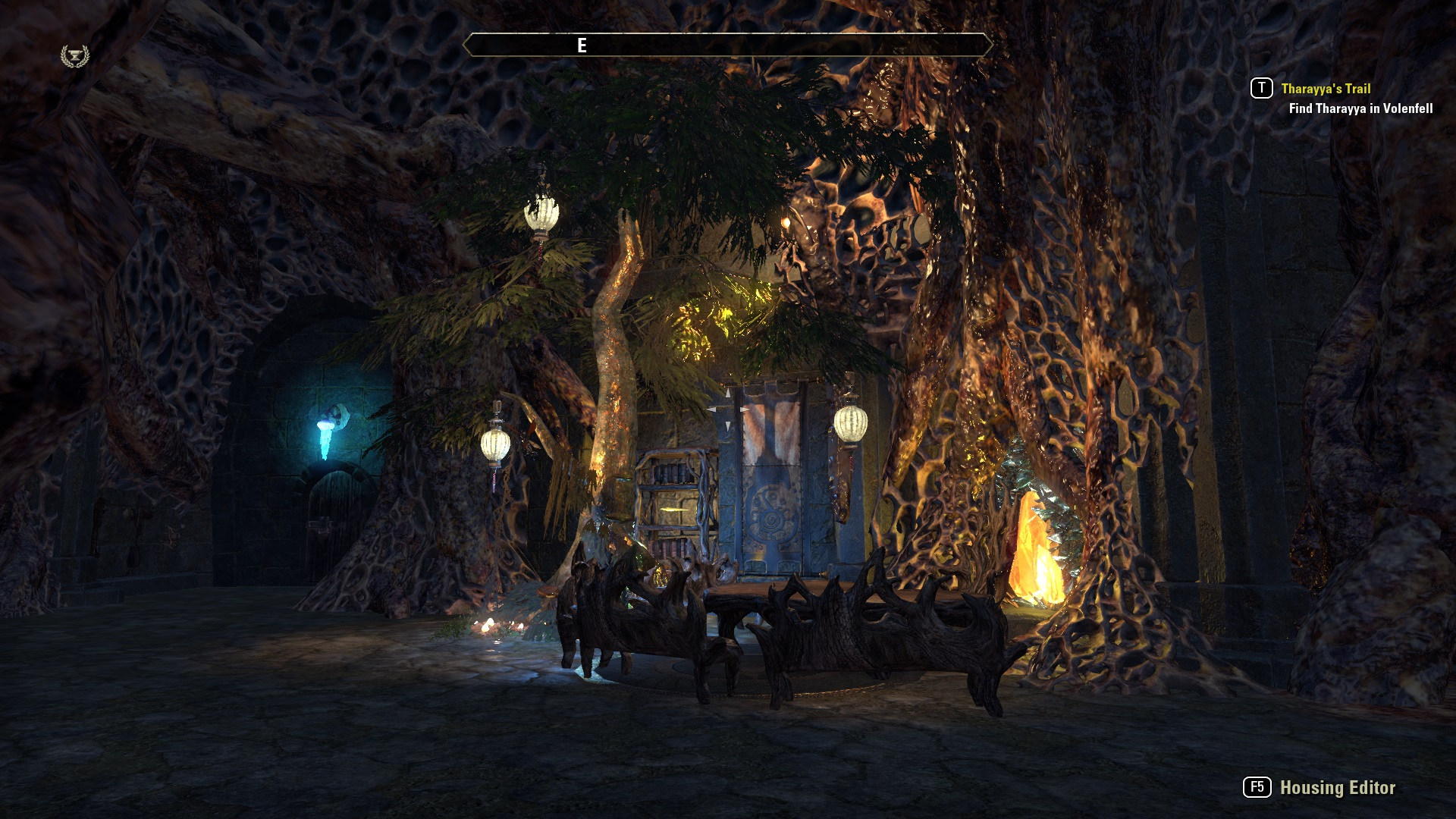 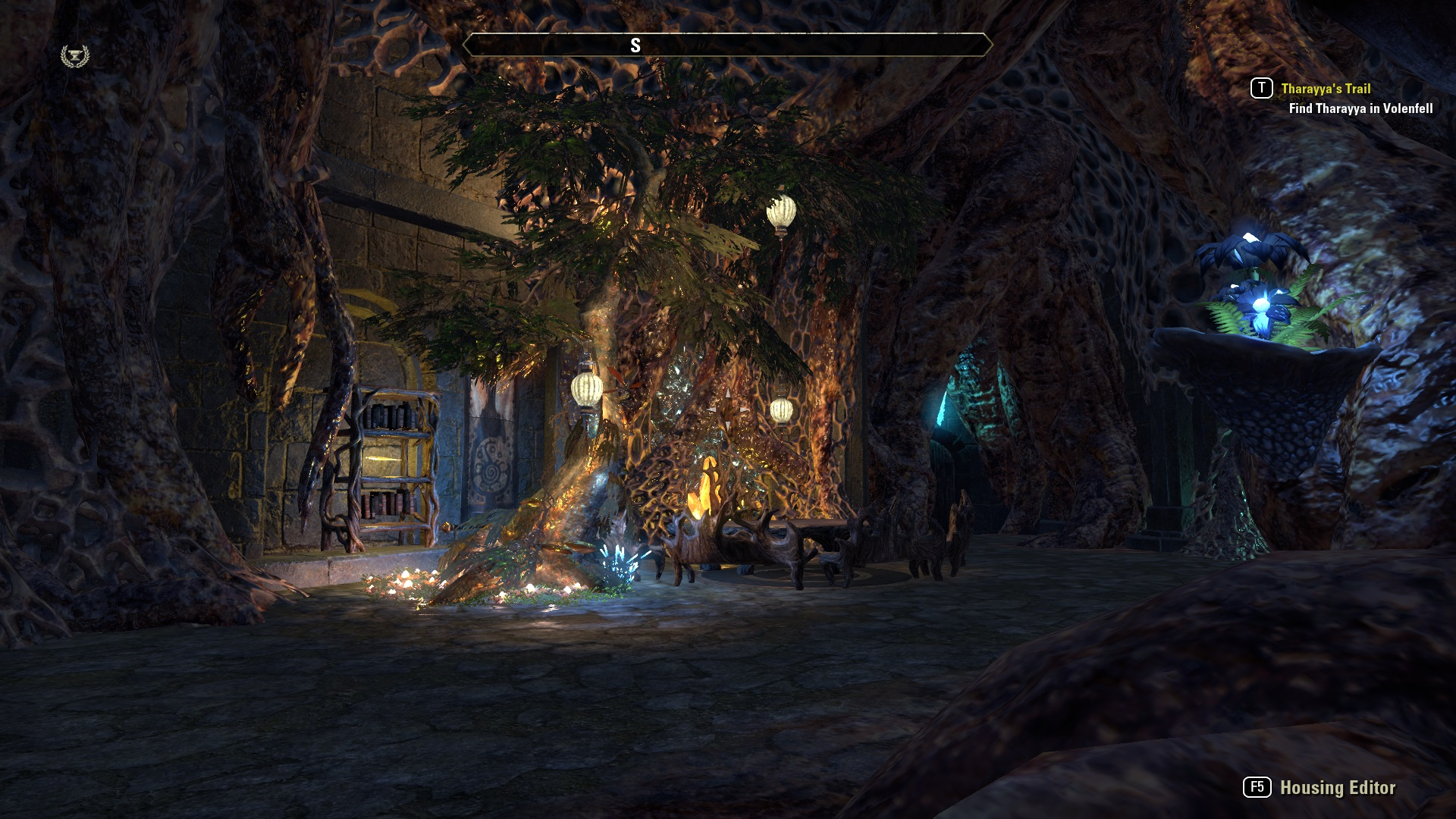 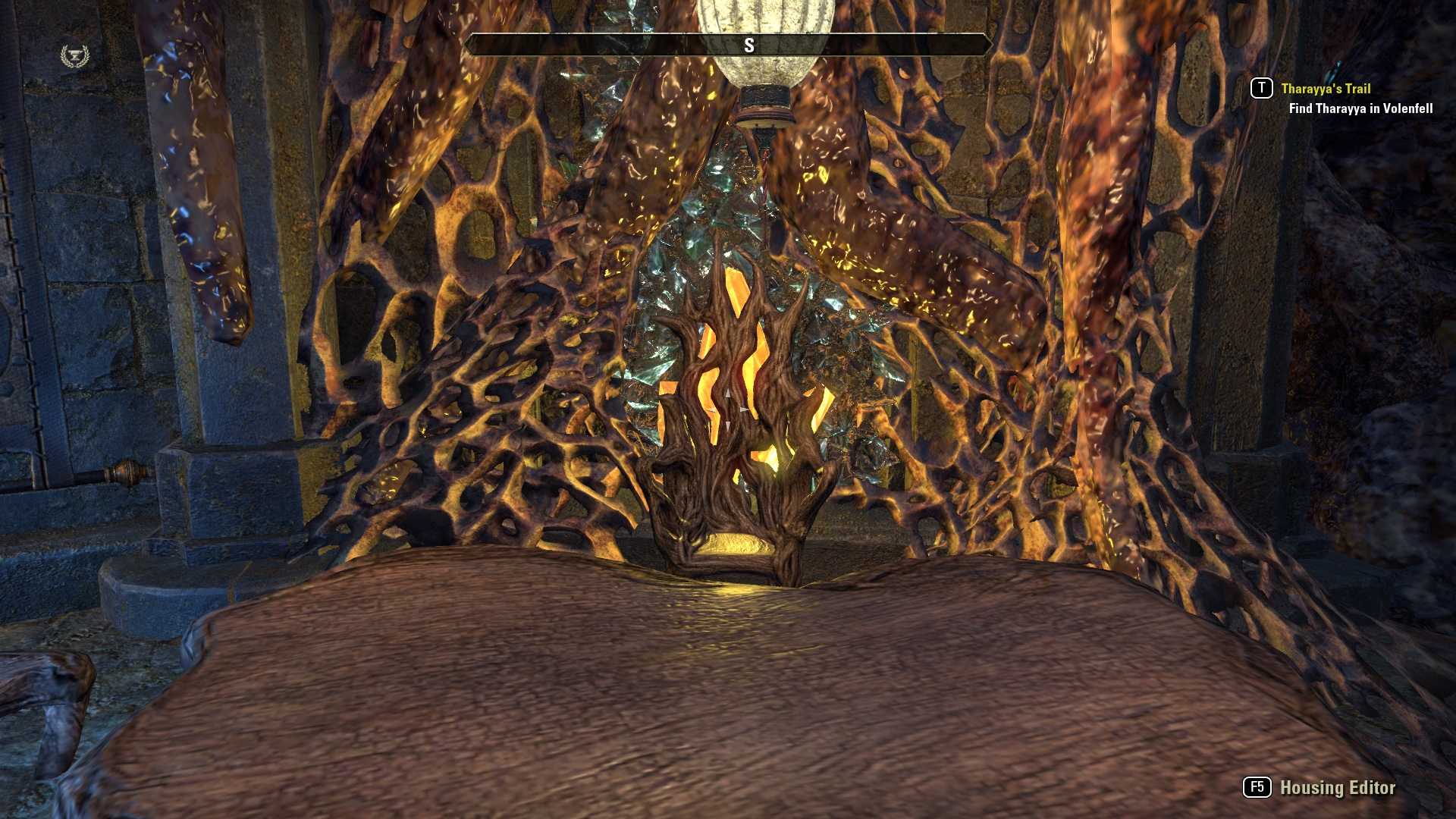 Air / yellow. There's the big honking throne all lit up from behind and a table with lots of seating. This is a place where you can hold meetings and conduct your business without any fear of anyone forgetting who is in charge. Air is the element of logic - which is at the core of magical endeavours and good management / leadership. It's difficult to represent air with furniture but there's a little flying nixad and some floating psijic books and the floating crystal. 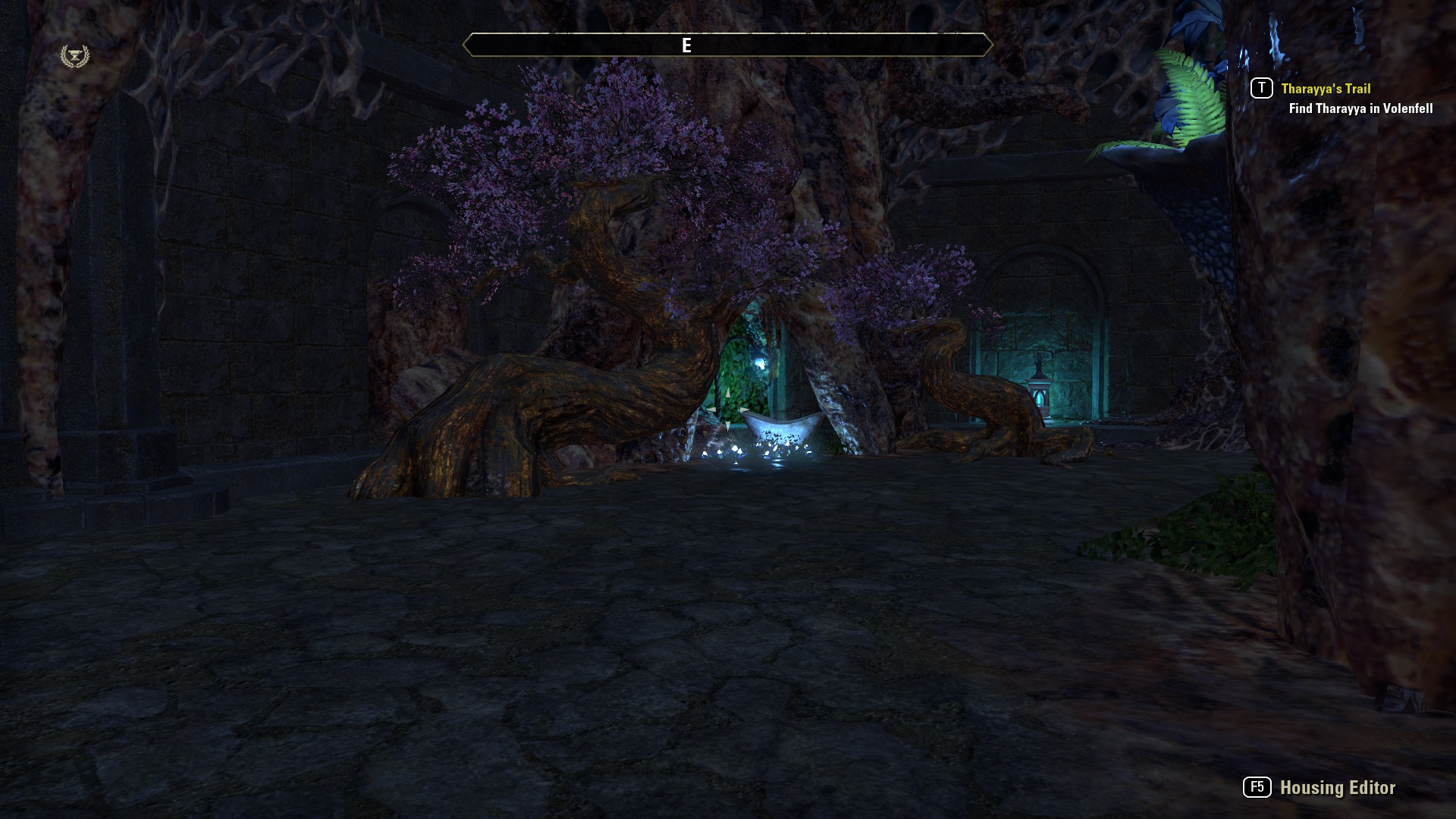 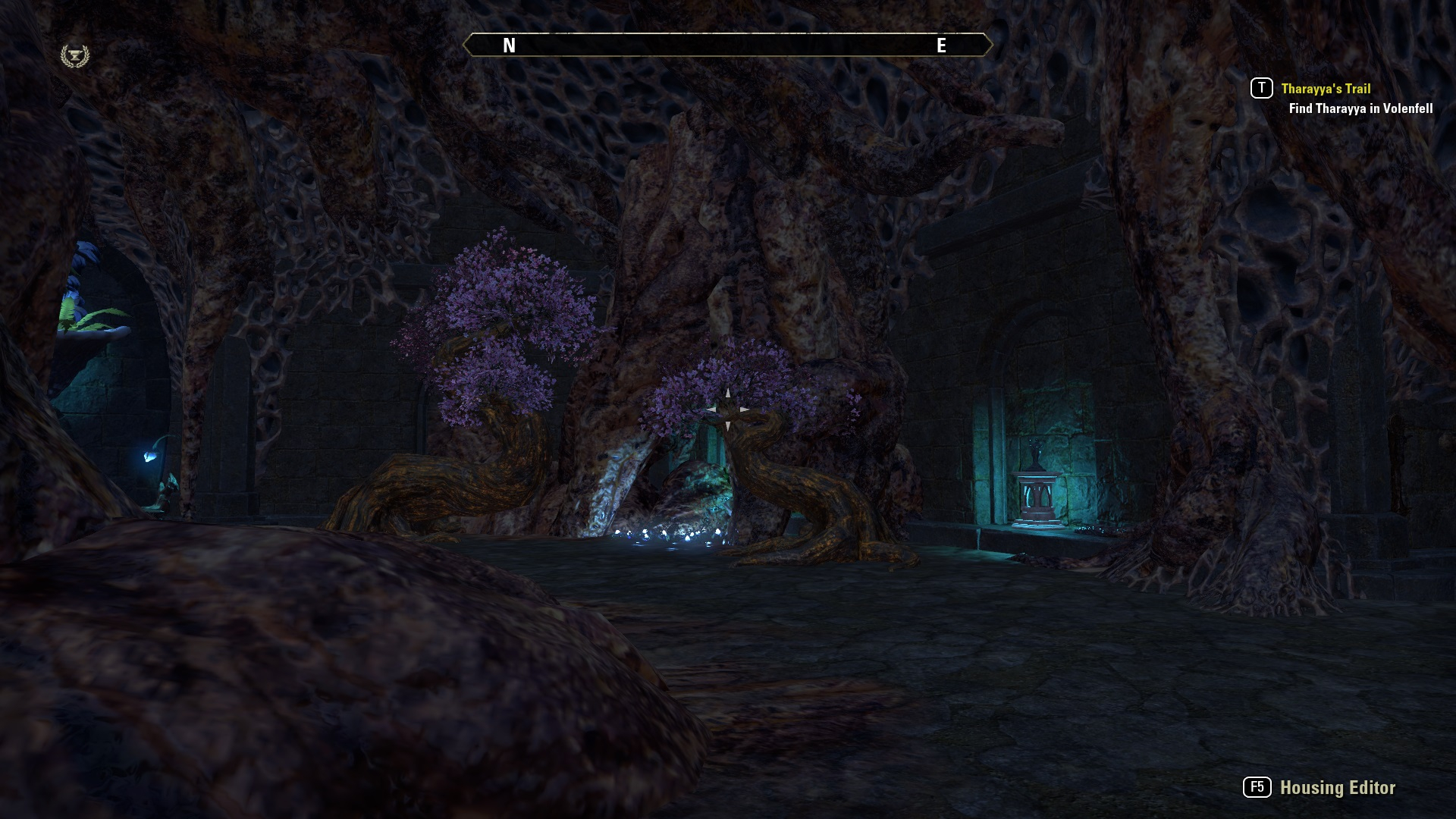 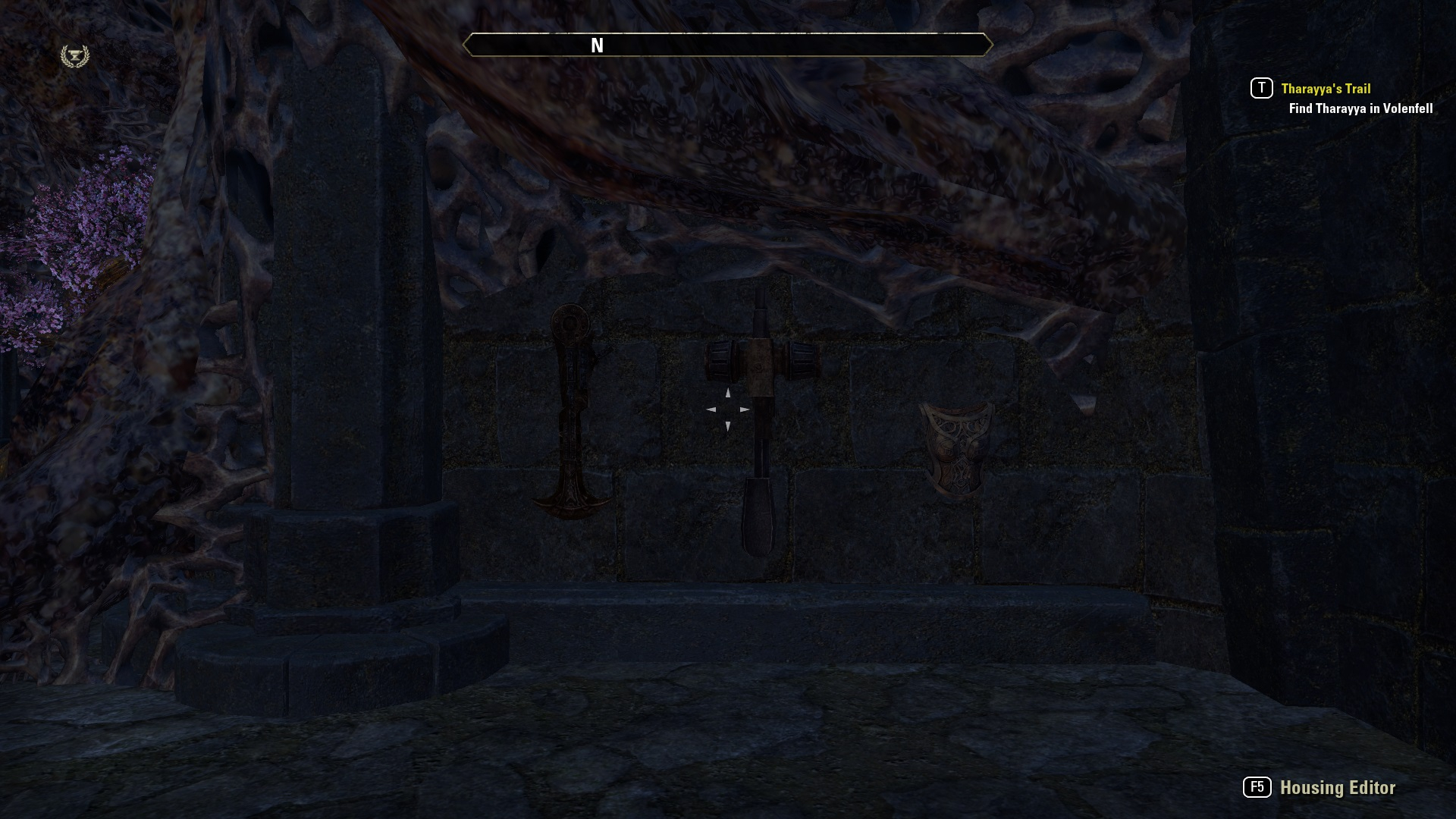 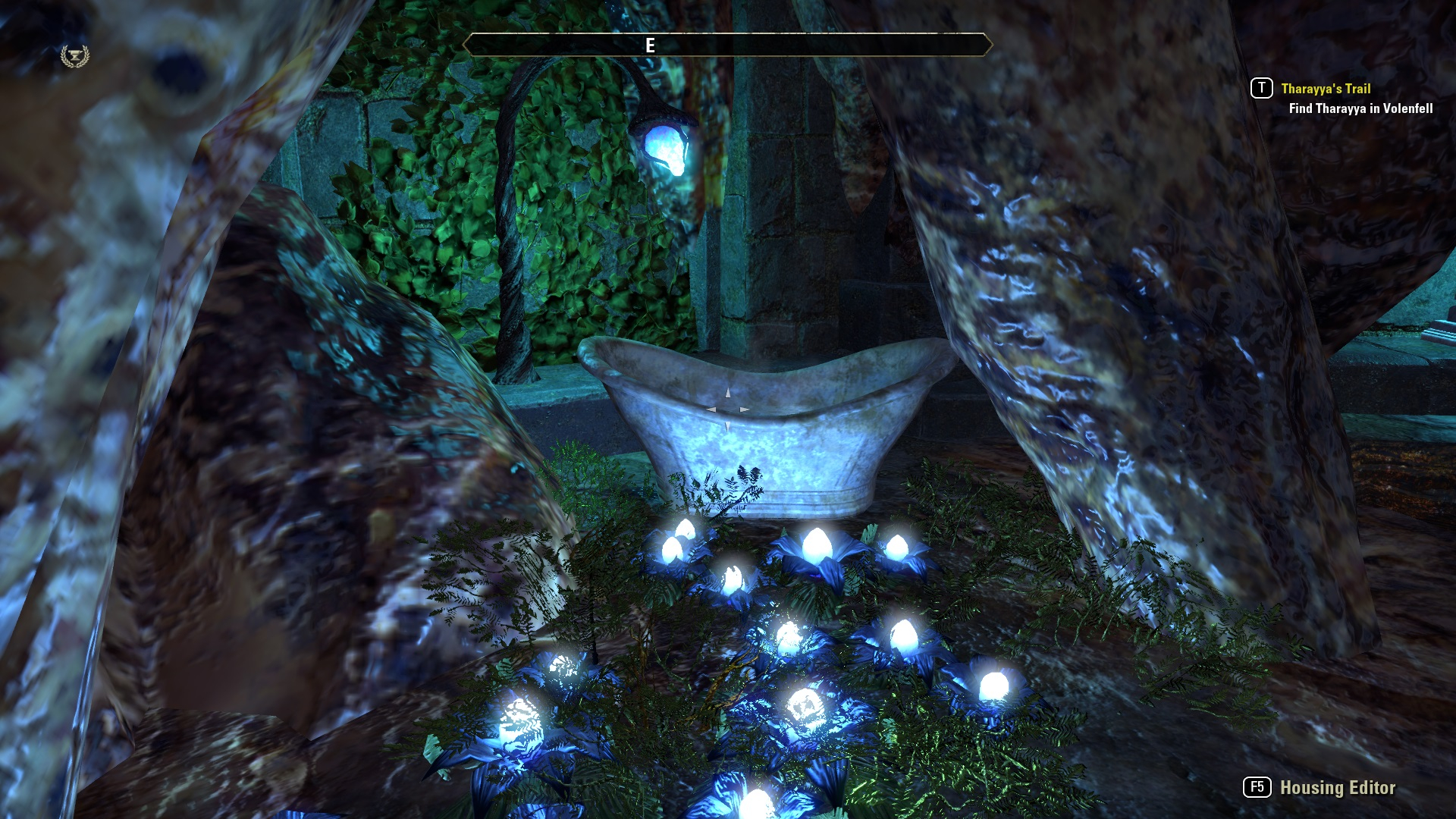 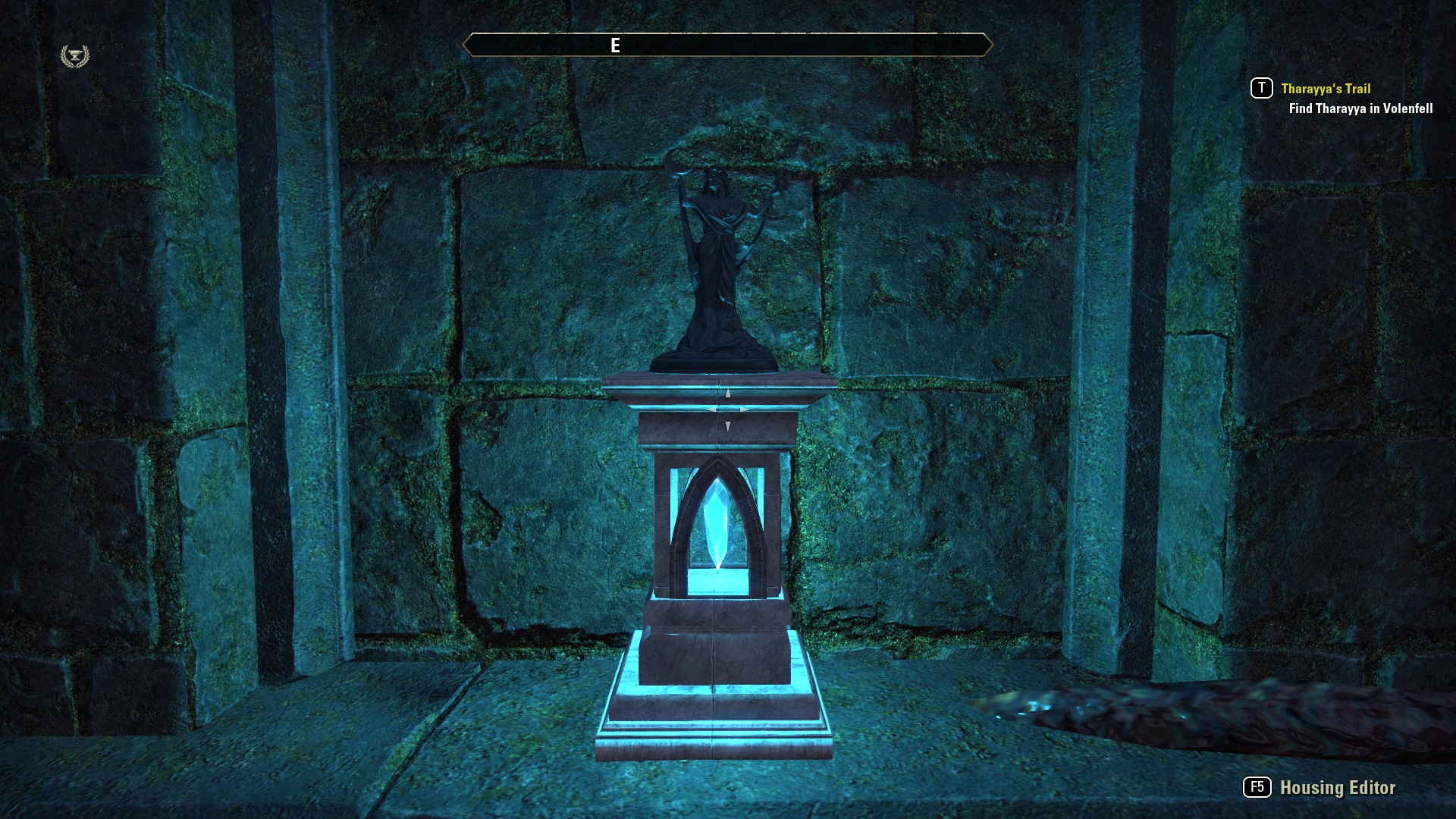 Water / blue. There's a bathtub. Easy peasy. If Azura had to be crammed into an element I reckon it'd be water - all flux and beauty. So I've put her here with her replica dreamshard where she looks suitably magnificent. 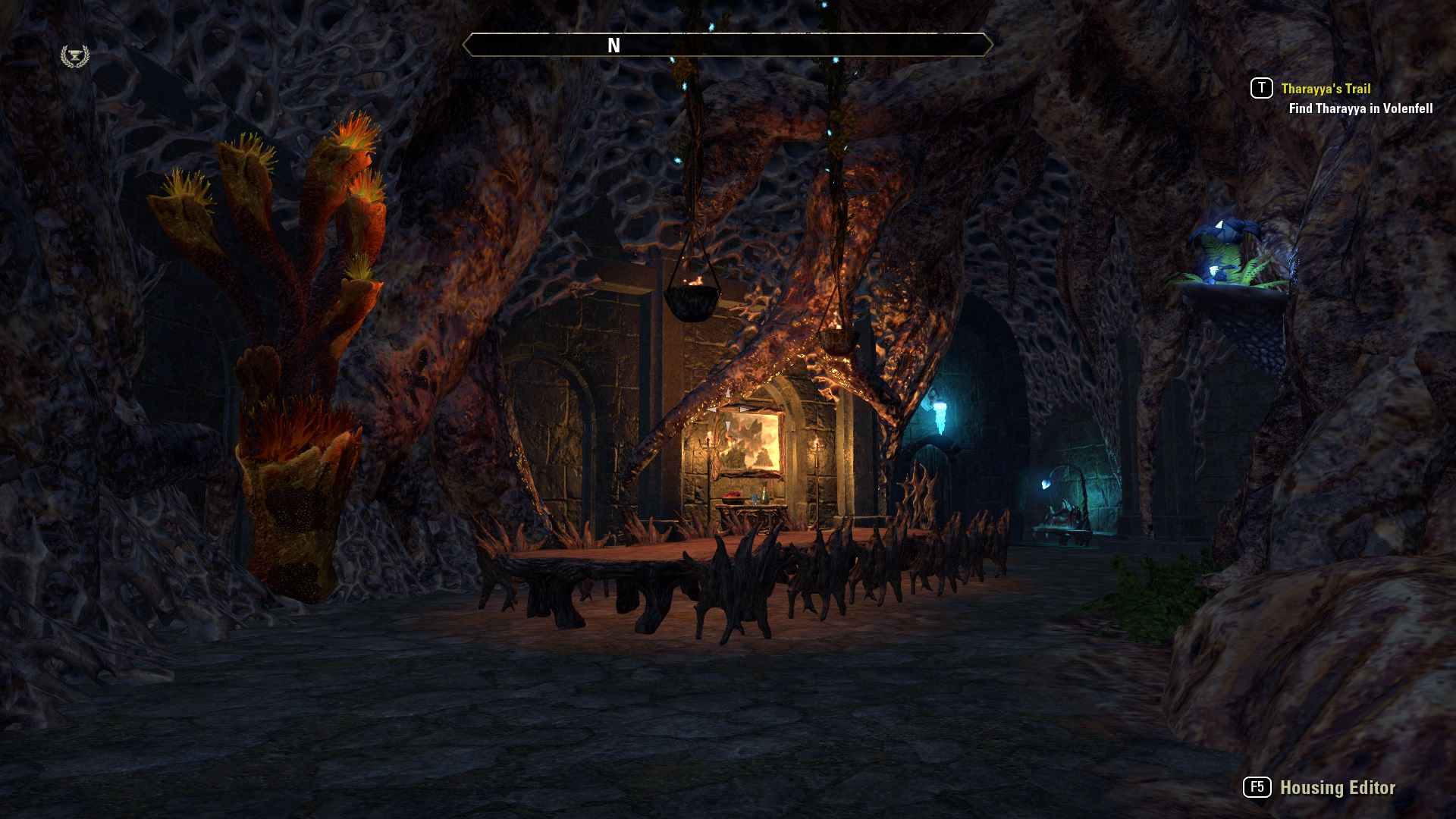 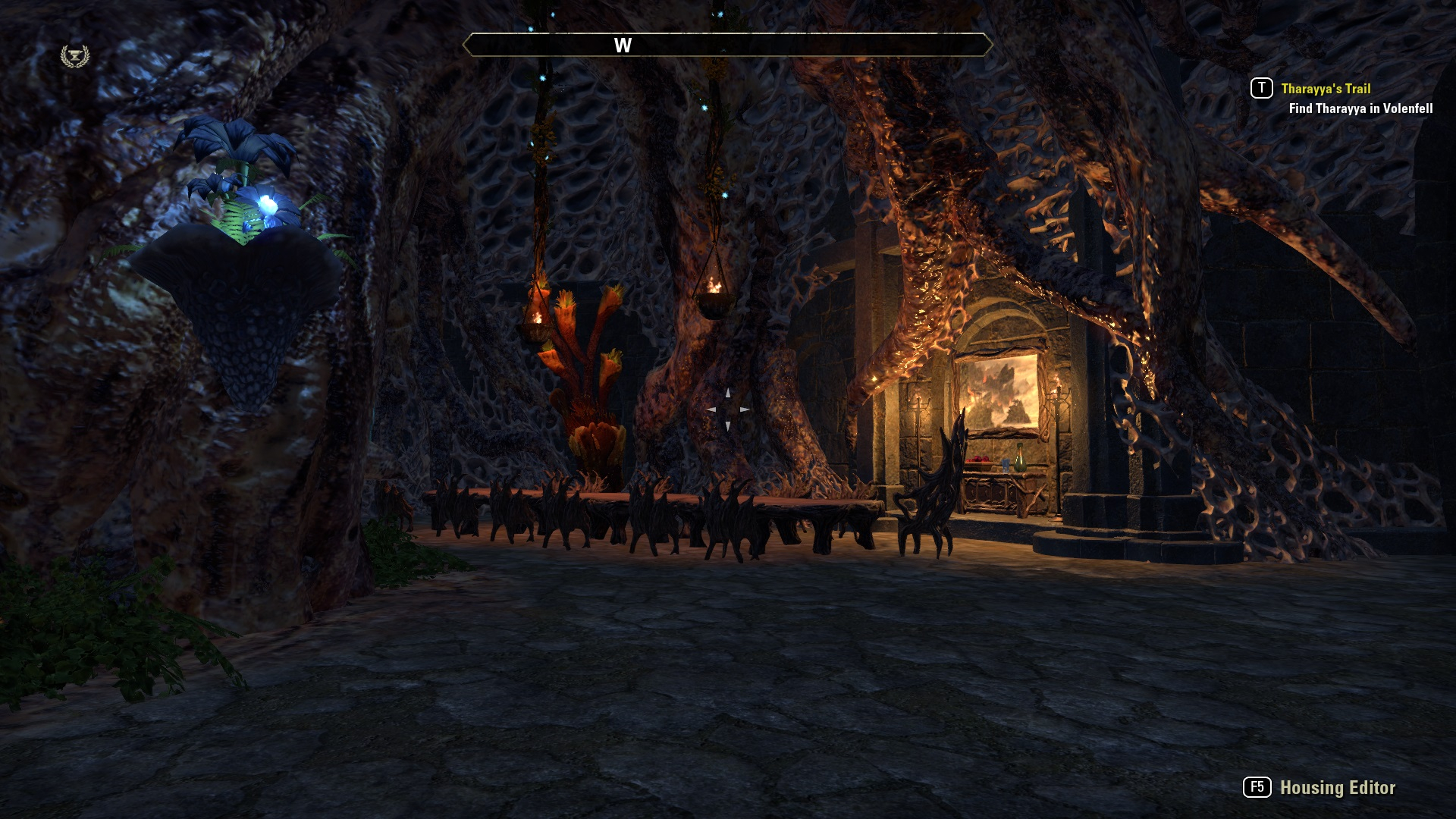 Fire / red. Lovely big bosmer chandeliers with open fire. Some clockwork lamps. That gorgeous coral which fits that space perfectly. The painting of the volcano. A place for eating and the replenishment of energy. Again a little bit of Telvanni psychology with the layout. There's no chair down the other end cos there's only person who everyone should be paying attention to. Plus if people are still arriving after you're seated it's you they see immediately upon entering. Not the back of some random halfwit's head.

In case anyone's wondering the flowery ropes holding the chandeliers are upside down bosmer thrones. And the sideboard is a custom piece - it's a couple of telvanni nightstands feet to feet put inside some telvanni bookshelves. 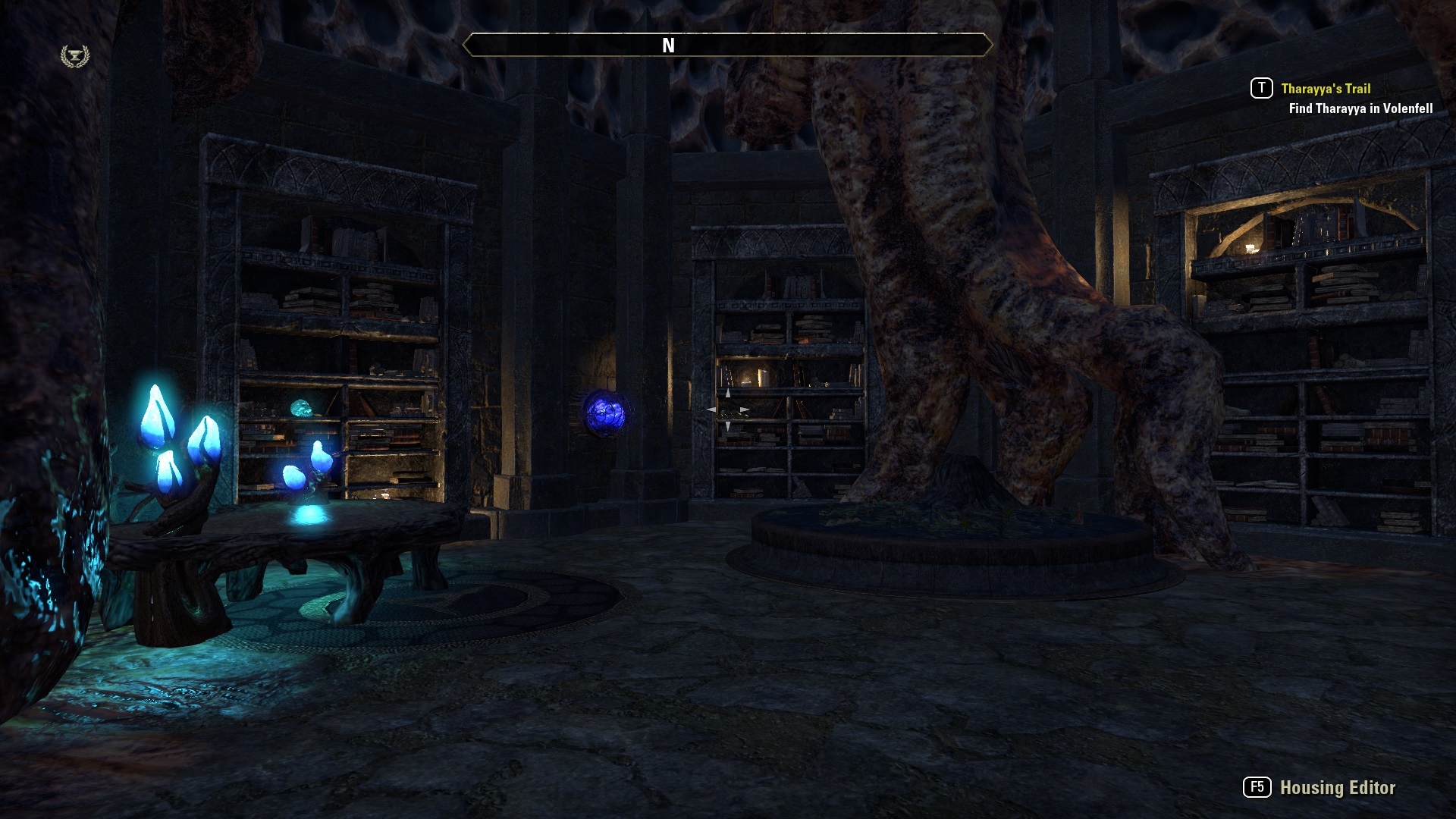 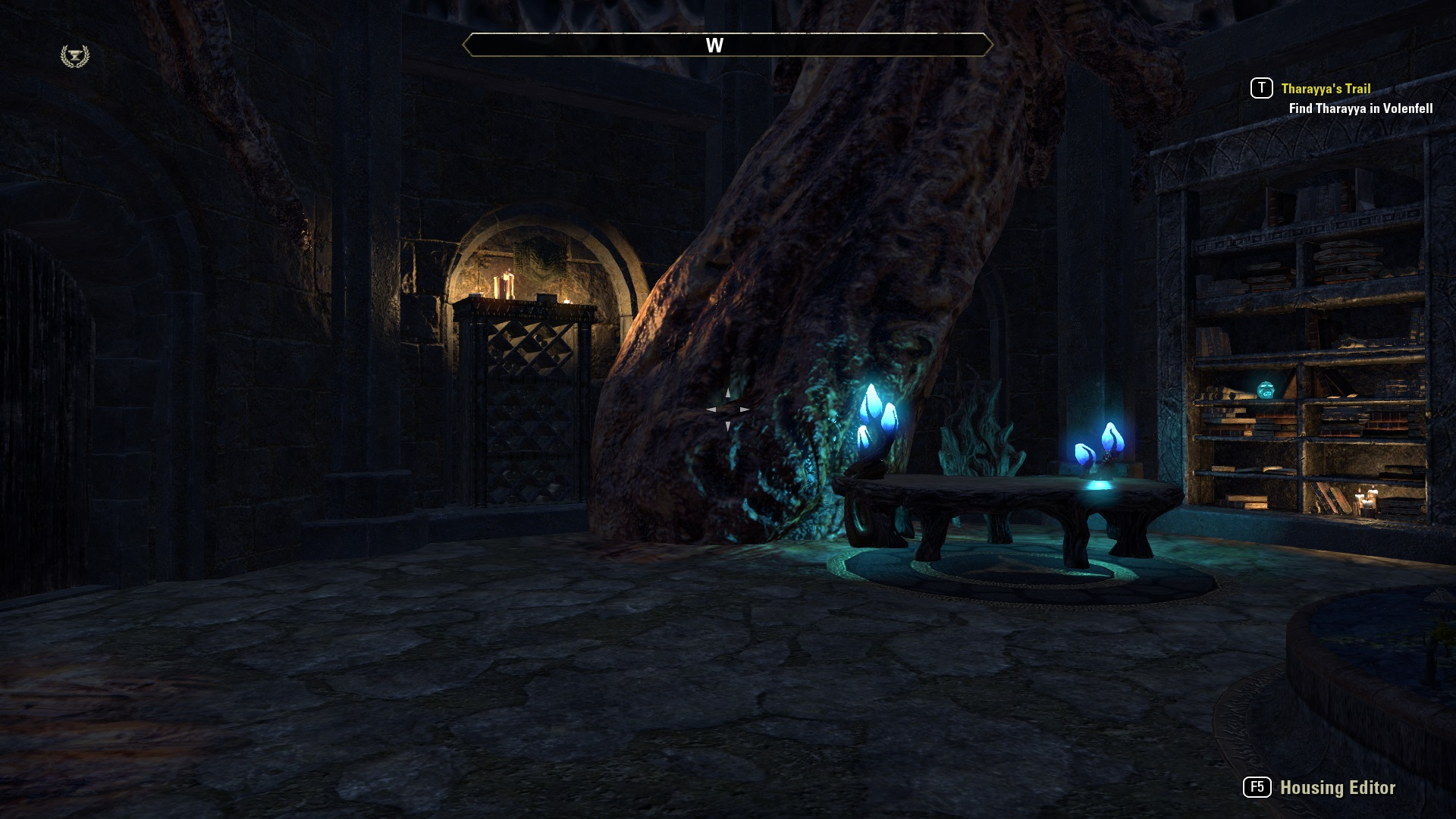 I'm mad for books so had to have a library and noticed the murkmire bookshelves had that curve at the top like the niches in Tel Galen so jiggled one about in there and found that it fit perfectly. Then bought a bunch more.

Every bookshelf is identical (except the one behind the door) but don't look it because I've decorated the gaps strategically. Nothing complicated. Just candles or other visually distinct objects, eg. the augur of the obscure.

The Vvardenfell scale model fits nicely. Abyssal pearl inside the revolving celestiodrome on the wall. 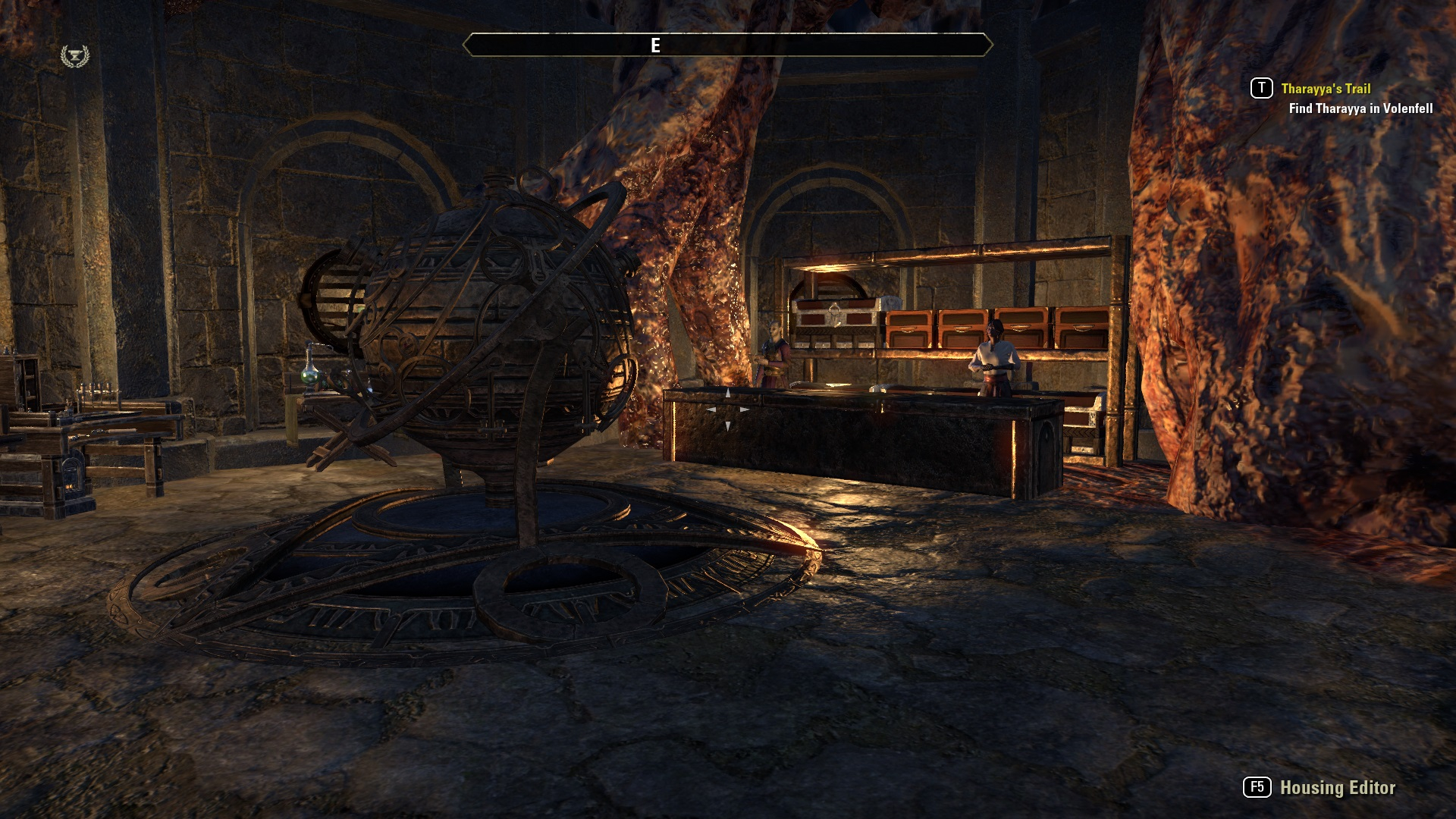 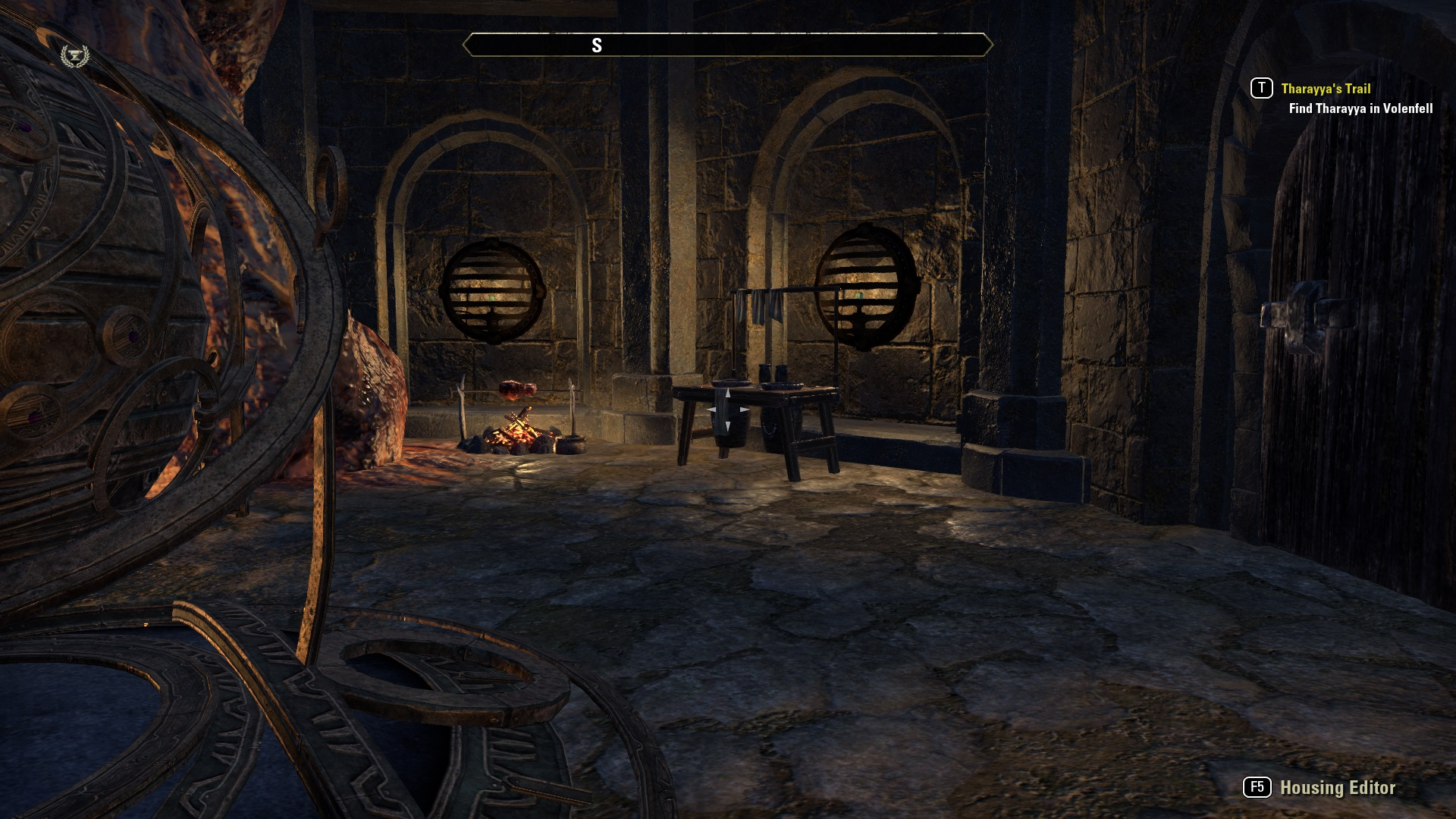 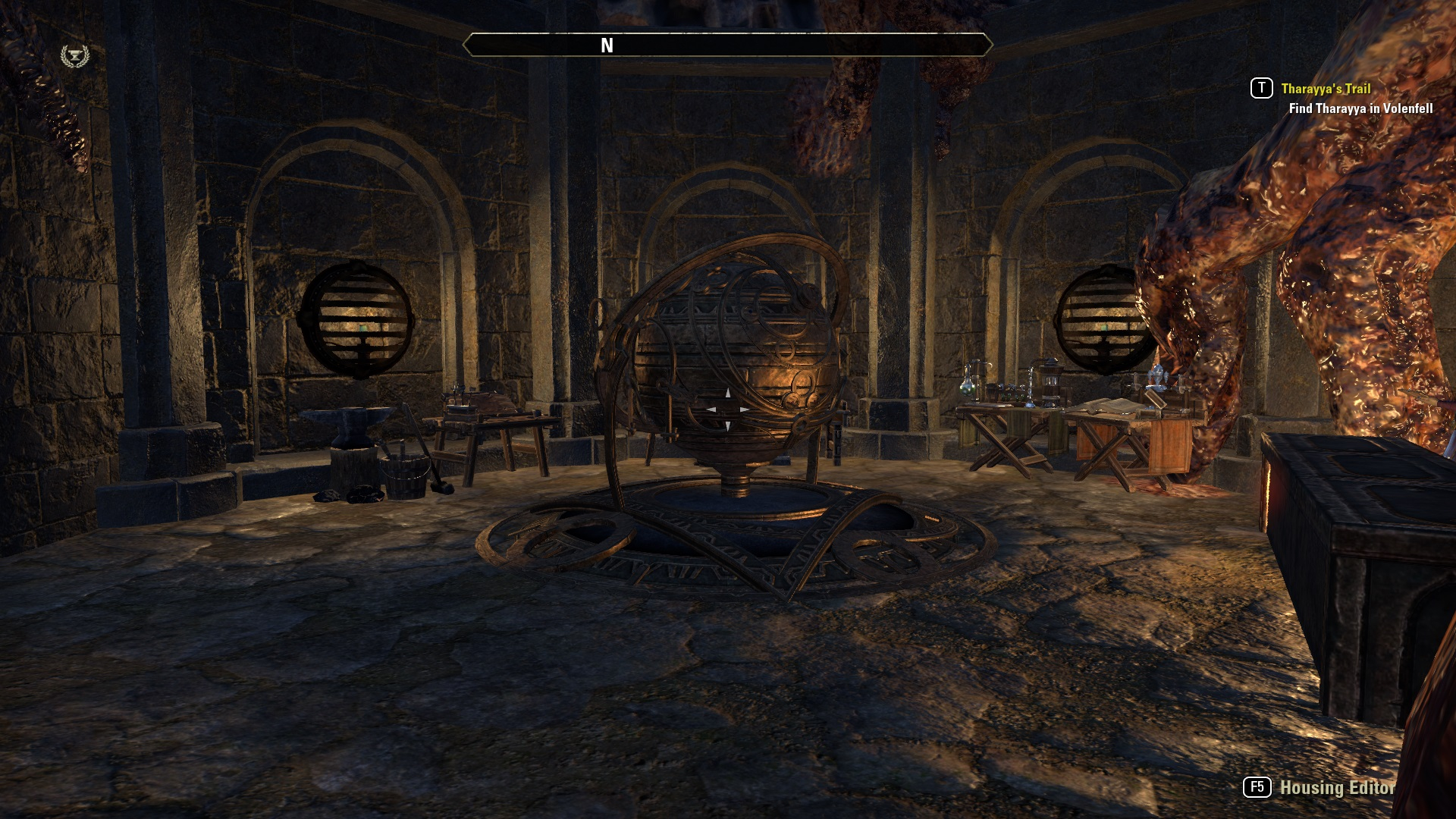 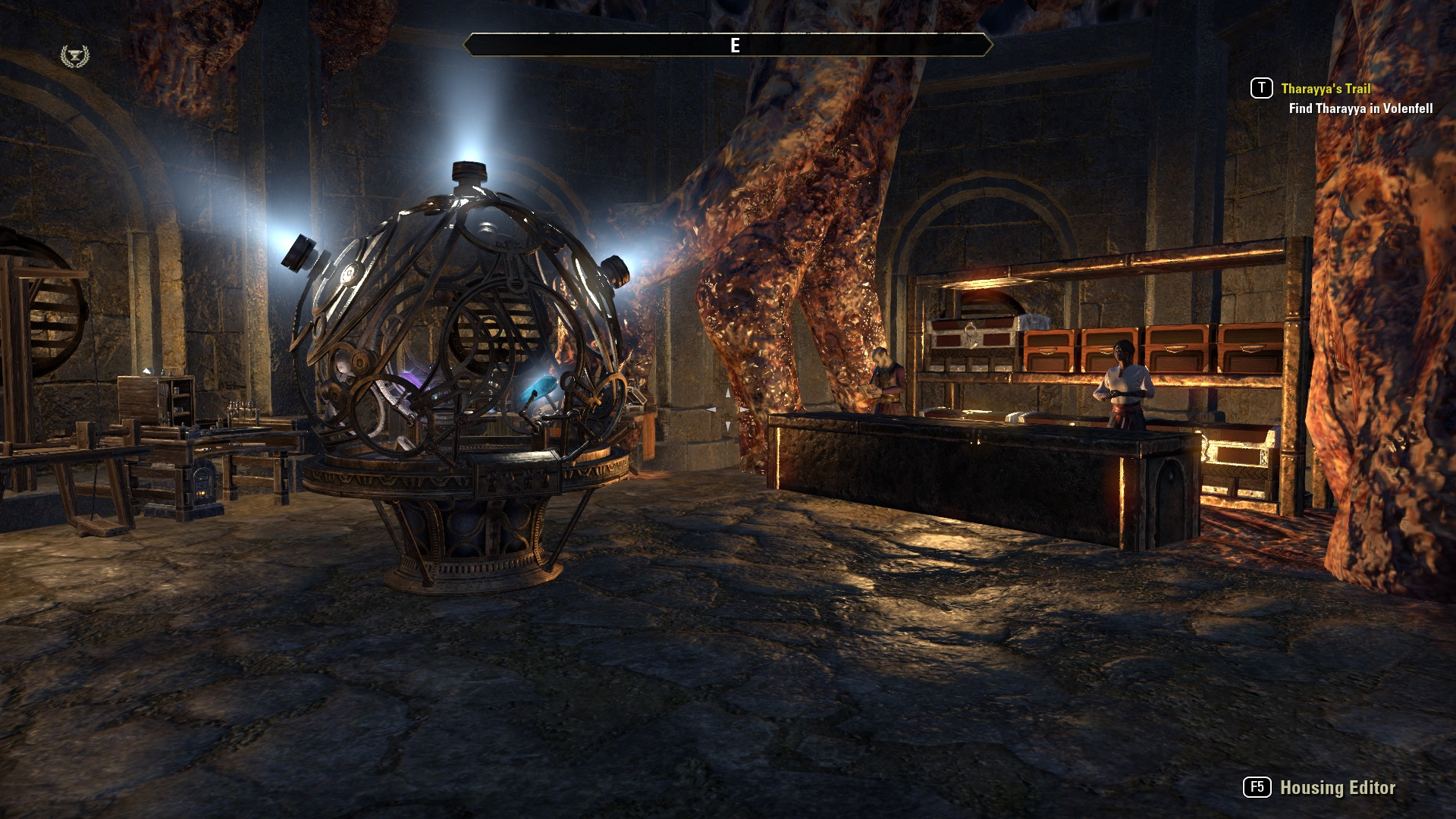 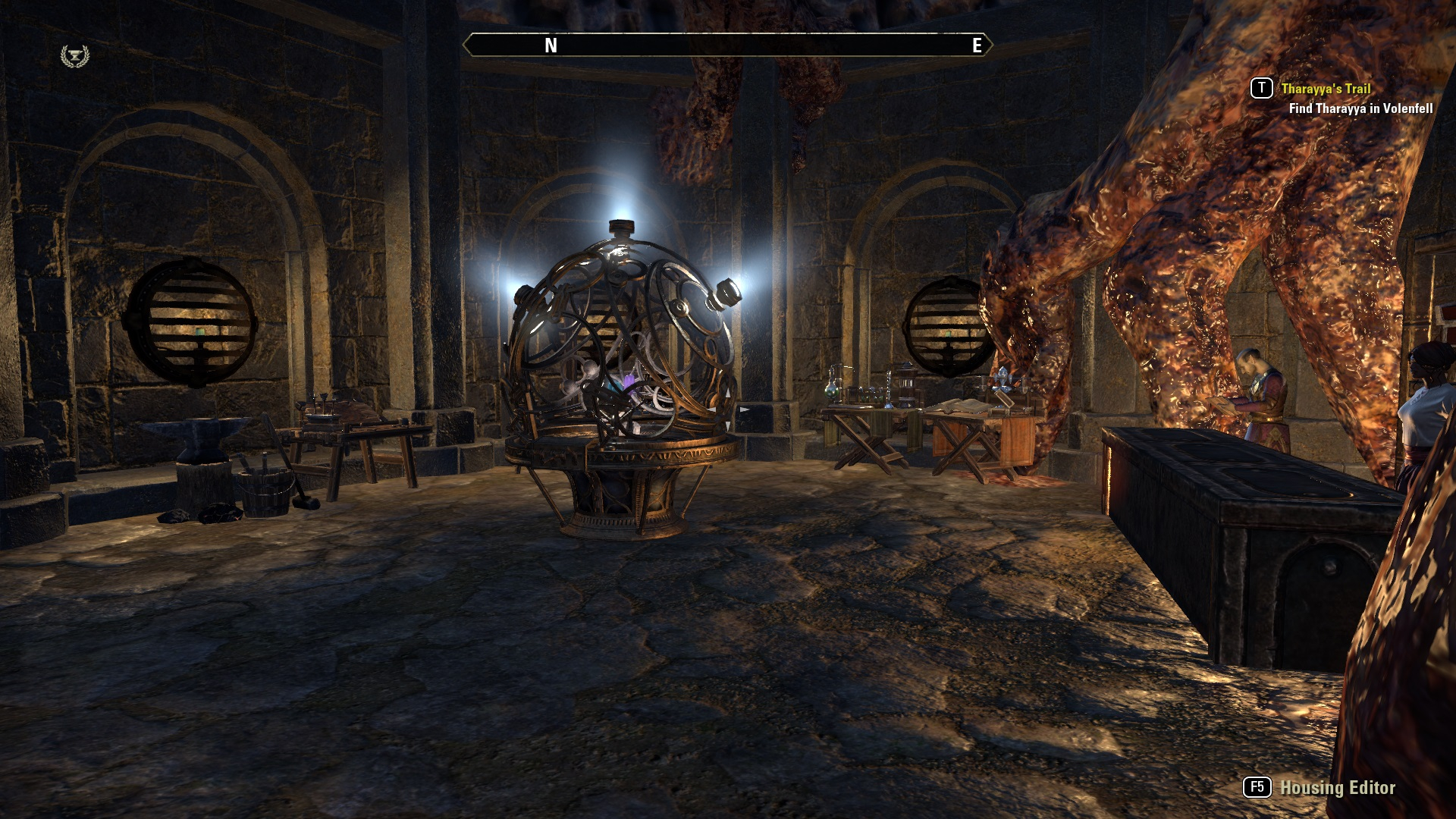 This is not even close to my original vision for the room, but with the provisioning station giving off fiery yellow light and the dye station working better it yellow / natural colour light as oppose to blue, that dragged the rest of the room with it.

I think the end result works really well though. With the clockwork centerpiece - either the clockwork orrery, compact or the attunement station and everything else clockwork, I think the regular crafting stations look good. They break up the brass monotony rather than just looking cheap.

The clockwork orrery is a good example of taking advantage of the system. This is only the top section of that furnishing. The whole thing would have taken up most of the room. But just that top section is perfect as a big, interesting centerpiece which eliminates the need for lots of clutter objects. 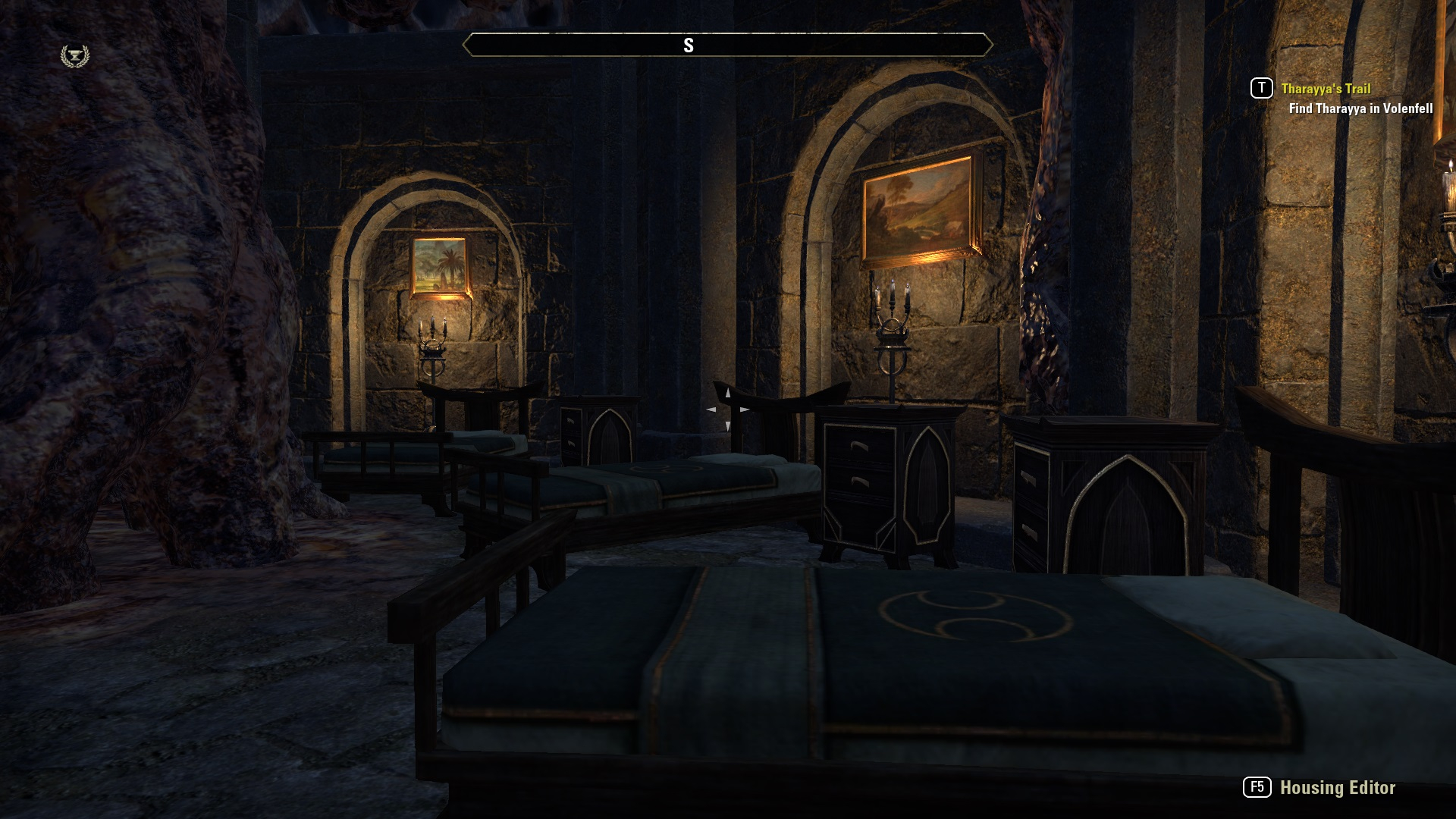 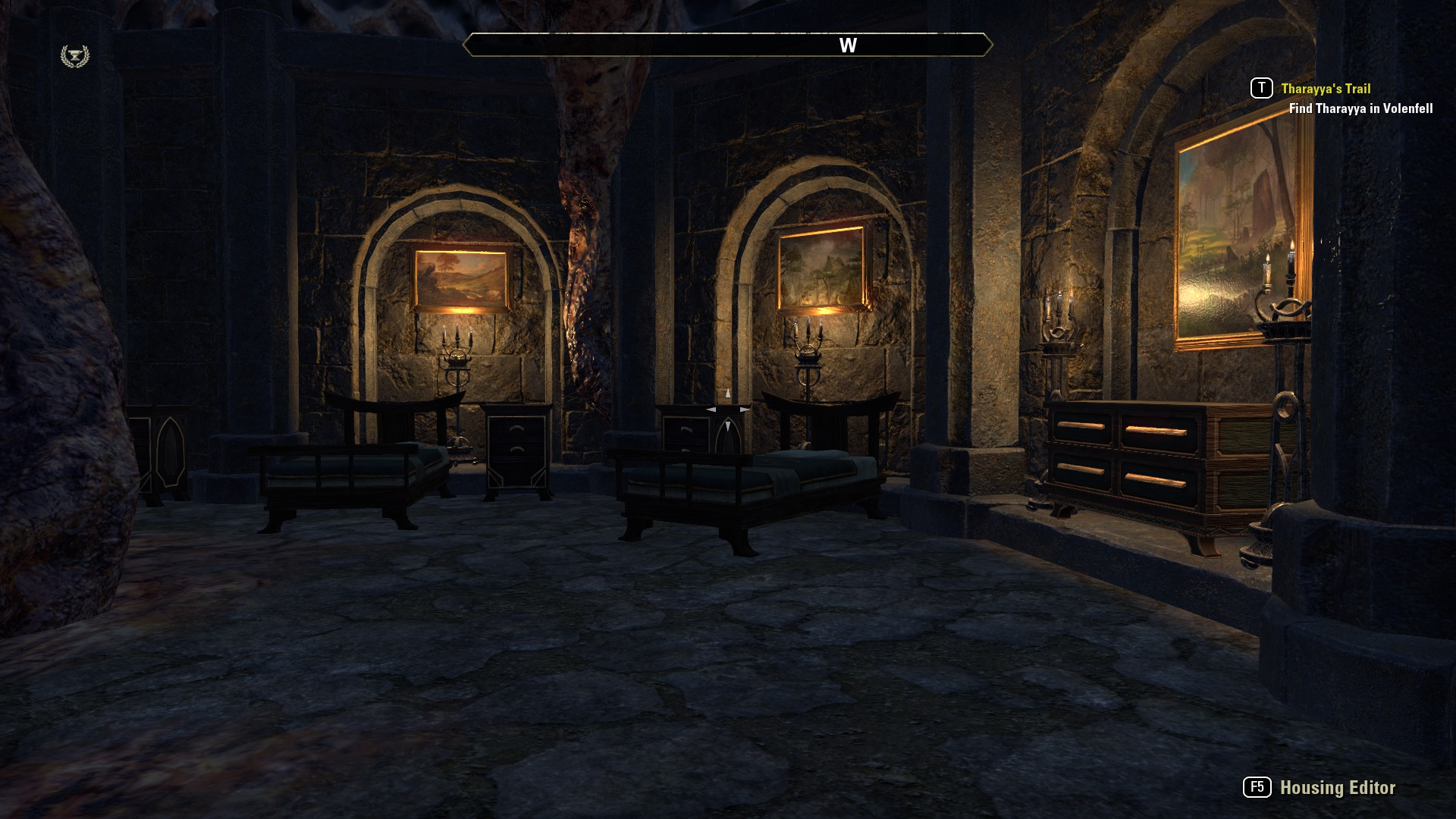 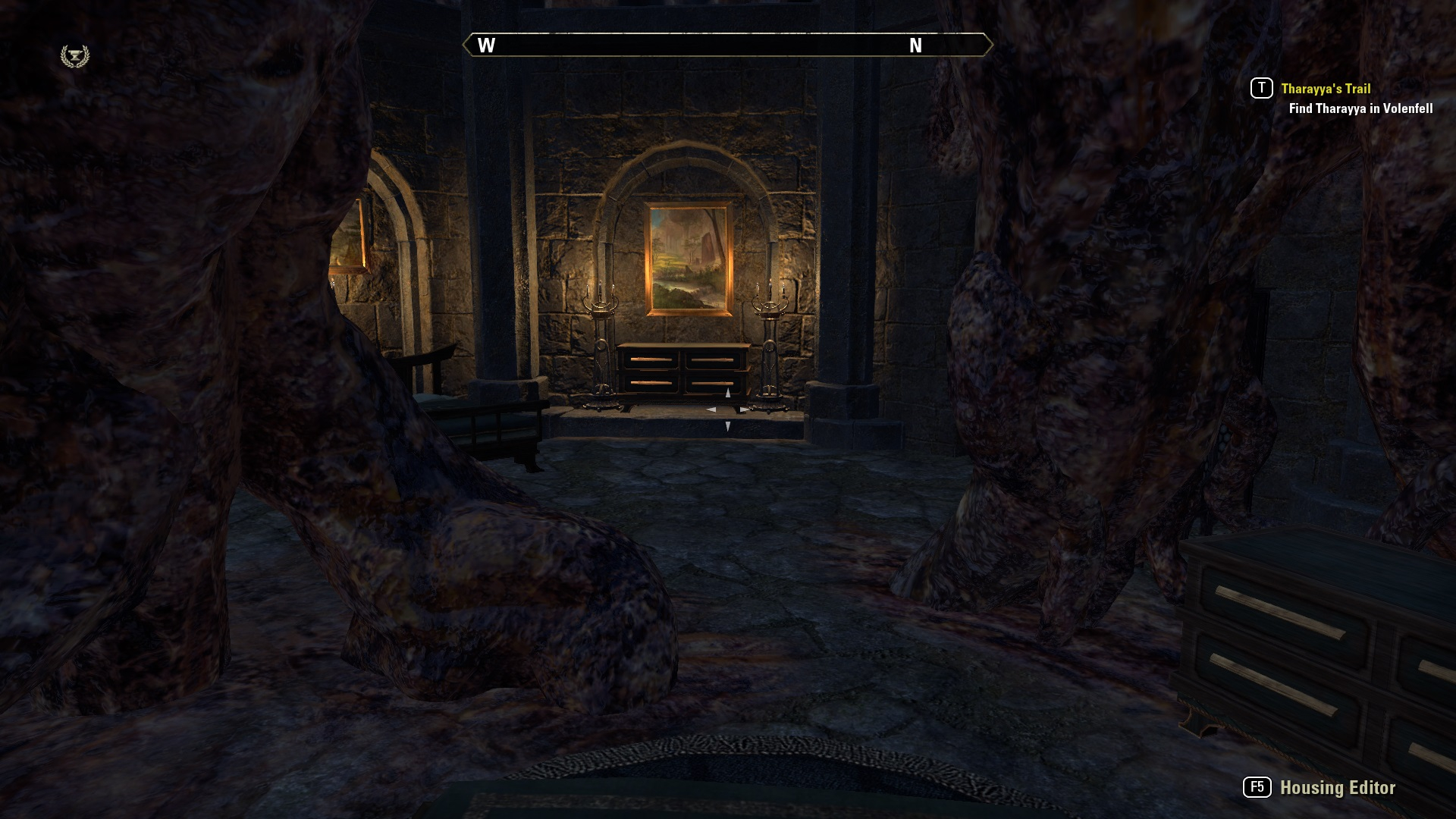 I really wanted multiple spare beds. I feel like I owe Tyth and Nuz a bed each and just possibly I might be using my dock to smuggle slaves to freedom. I loved this as my personal bedroom but its built-in subdivision was just too good not to use as the guest / servant room.

There being no Telvanni single beds I downgraded to dunmer style but in soft lighting I think it still looks stylish and the curvey dunmer beds in combination with the curvey Indoril lighting looks perfect.

The room really only needs the painting over the dresser just inside the door but I decided to do every niche. I like the idea of having a painting gallery and it would be a simple, practical way to assign to people to beds - you're sleeping under the pasture, summer hill etc.

Each niche also demonstrates how well a single painting can dress a space without the need for clutter objects. 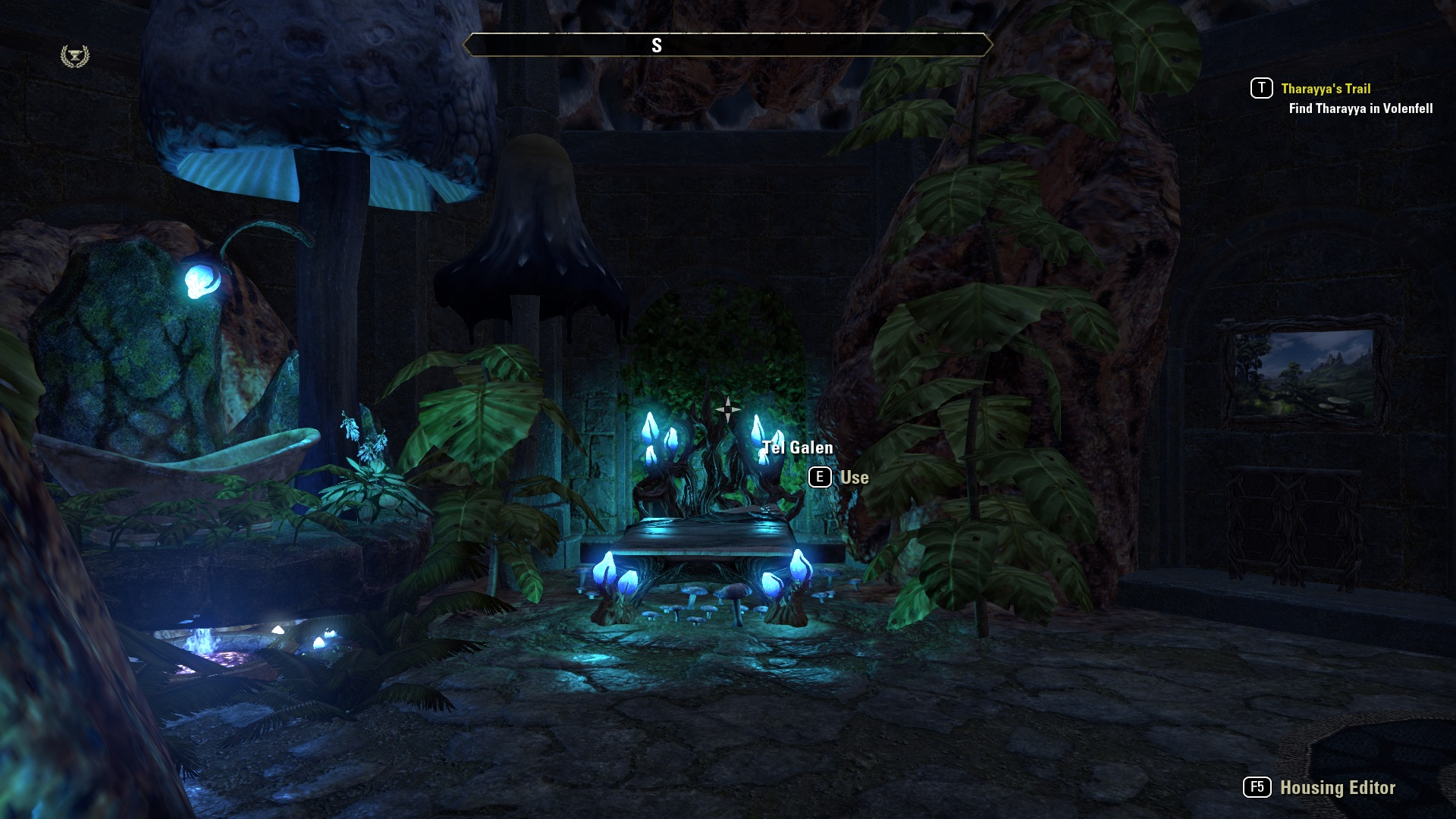 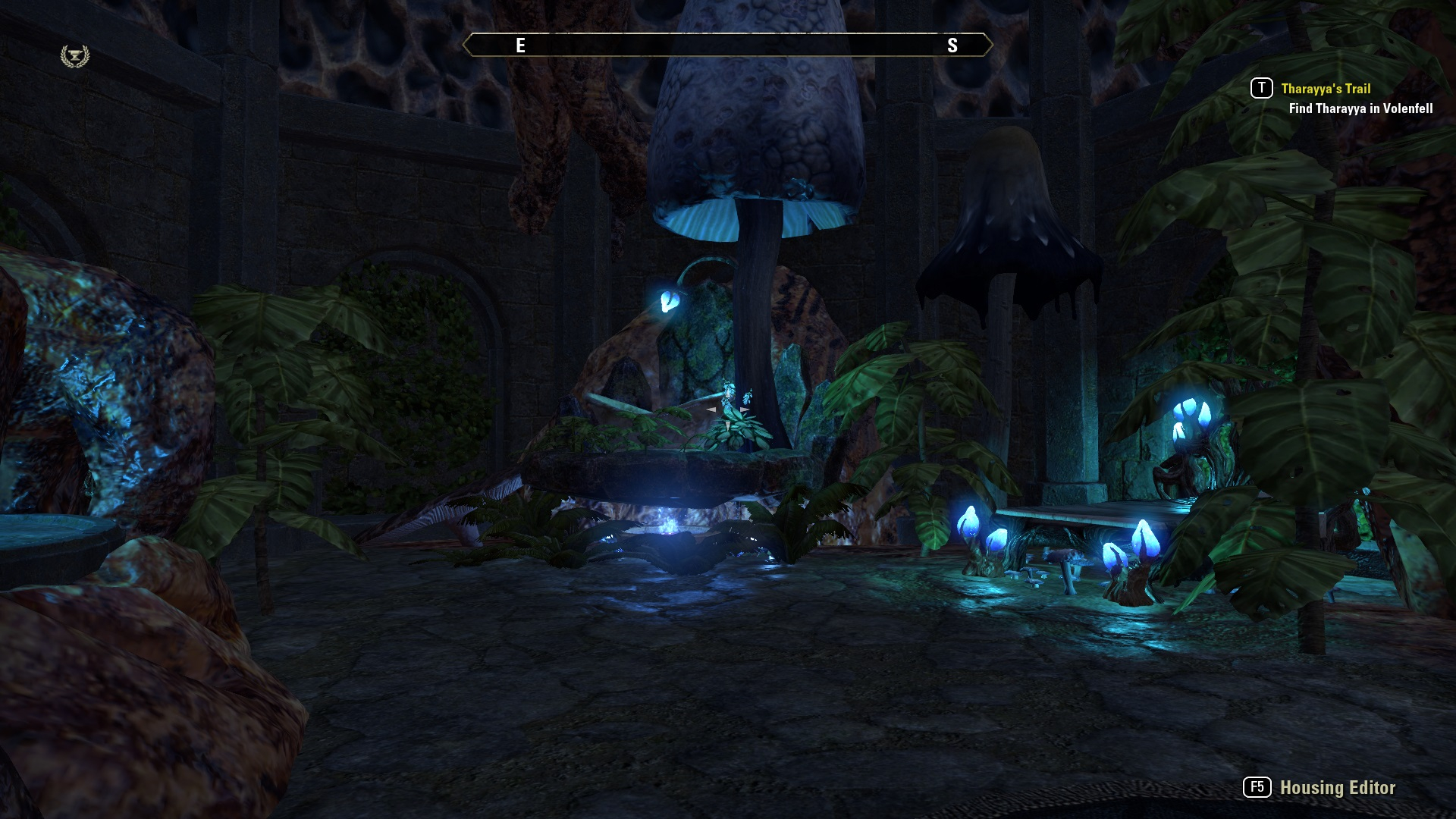 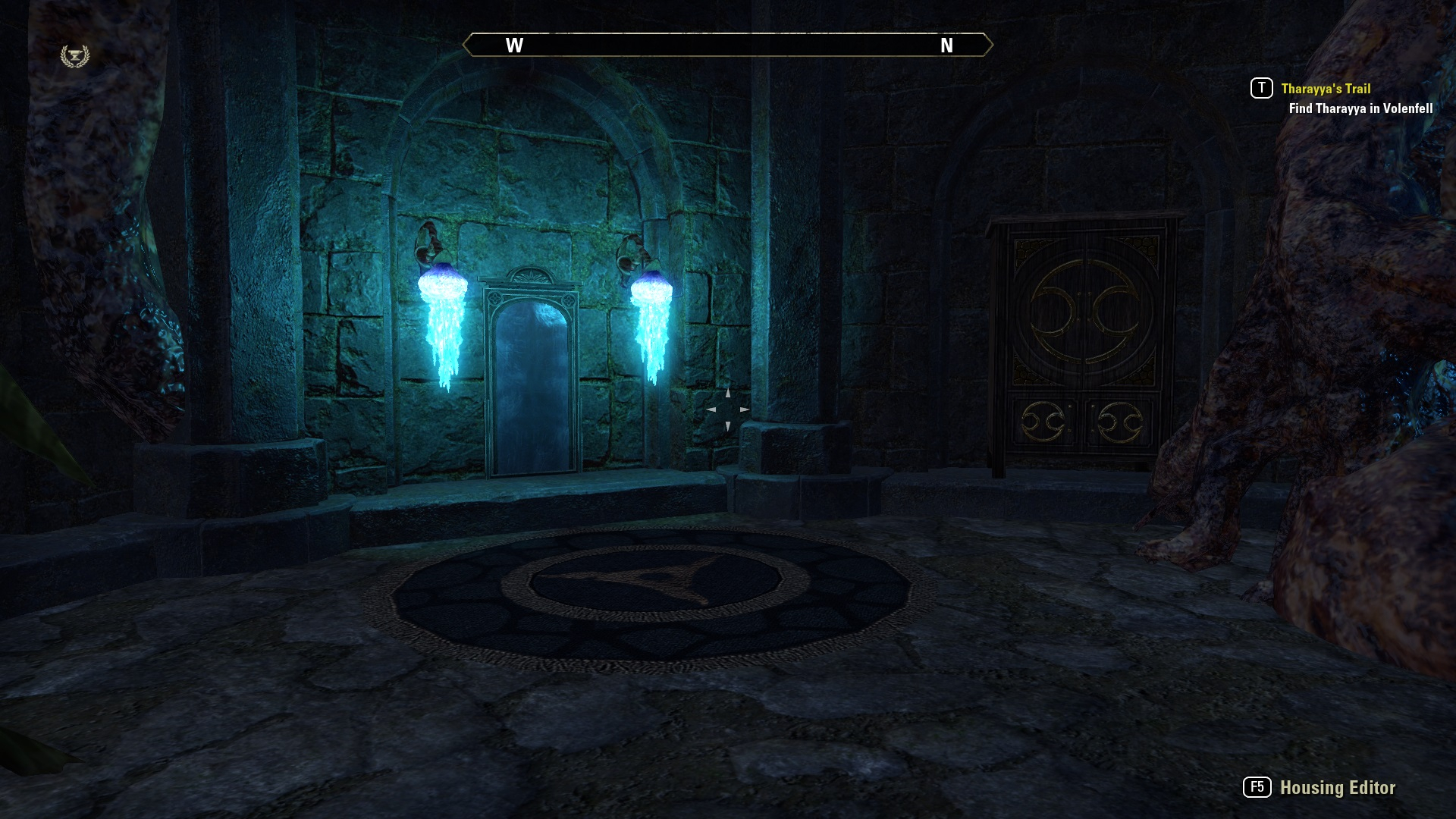 I struggled with this space. A lot. There's an overload of the big ugly fleshy protuberances the moment you arrive in the room - around the teleport pad and on two of the walls. They needed to be obscured and I went through about half a dozen wildly different designs and layouts before I arrived at this. Which I now love.

If you've ever watched reno shows, the one thing universally appreciated is under floor heating in a bathroom. Even with Vvardenfell's tropical climate, the tower chamber is up very high and it could be cold as the proverbial witch's you-know-what up there.

I think it's cool and looks pretty and it's not screamingly obvious that I'm just trying to hide something butt ugly. Then I decided to keep with the bosmer theme - that's a bosmer hearth stone holding the bath - and went full jungle on that side of the room.

I might try to squeeze a few more flowers in there to get a little more colour variety but I reckon it's very close to perfect.

On the other side there's the essential bedroom furniture minus jungle. But with a Telvanni painting carrying a little piece of the jungle over to that side both with its woody frame and what it depicts.

It's possible to decorate even manors with much less than the maximum with ESO Plus limit of 700. If you use big pieces to maximum effect then you can create gorgeous spaces with even the unsubbed half limit. My interior looks fantastic with just 239 items.

The weird empty diagonal space on the wall outside the library / room on the left is the only area I don't feel is finished. I wasn't able to find anything which worked perfectly there so decided to leave it empty for now.

EDIT : Removed an image which had caught some friend login notifications in the chat window, i.e. their account names.
Edited by Nerouyn on August 5, 2019 12:22AM
#1 August 2019
6 Quote
Home Forums Housing
Sign In or Register to comment.