Home Forums Add-Ons & UI Mods
Sign In · Register
Maintenance for the week of May 10:
• ESO Store and Account System for maintenance – May 12, 4:00AM EDT (8:00 UTC) - 12:00PM EDT (16:00 UTC)
The Blackwood Chapter and Update 30 are now available for testing on the PTS! Read the full patch notes here: https://forums.elderscrollsonline.com/en/categories/pts/

Caro's Skill Point Saver - possible to use it to apply cp allocation via import of Alcast's builds?

daemondamian
✭✭✭
I have 13 characters in total and before the update I installed Caro's Skill Point Saver which I used for saving their skills then adjusting and reapplying after the patch.
I am struggling now to apply my points in the new CP system - not how it is done manually but where to allocate my points

I'm following Alcast's guides except for the craft tree but so far I've only done my main petsorc character.

The only choice I seemed to have left was to use the 1200 P.A. and just guess at what to spend the rest of the available points on. This seems to have possibly worked as I ran Vateshran Hollows for the 3rd time and it was way easier than before the patch (though I did adjust the build too).

That's the first problem I'm having.

The second is that I've tried allocating my cp on my other stam & mag characters too and it is taking up so much time I don't have. There's only a few days left to do it for free & I can't do normal random dungeon dailies or other demanding content without allocating my points.

So is it possible to use Caro's Skill Point Saver to apply cp allocation according to Alcast's builds? i think it might be according to below but if so exactly what text are you meant to copy? 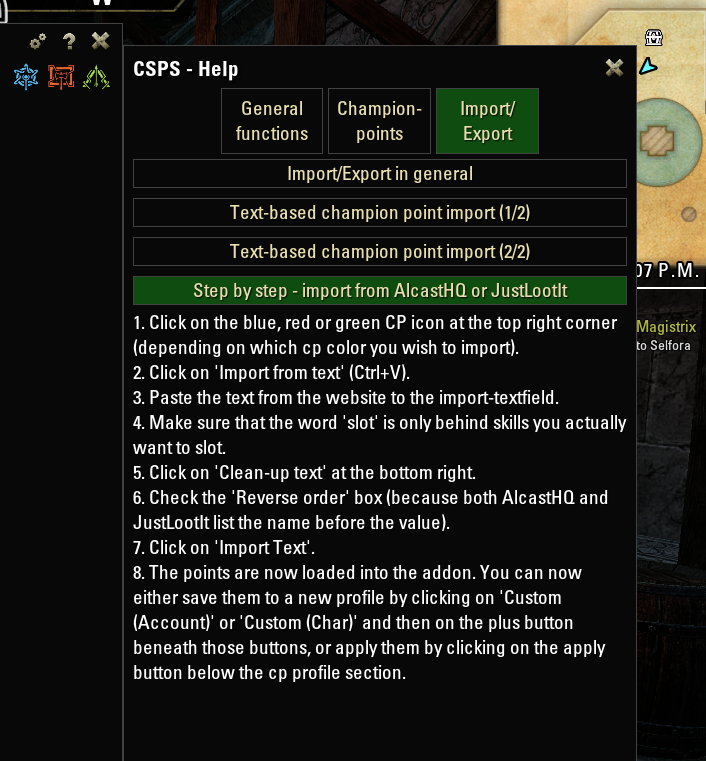 If it were possible then I wouldn't have to manually allocate every individual point on my characters, it would allocate them correctly, and I might be able to do it while it's still free.

TLDR: is it possible to apply CP 2 Warfare and Fitness points to multiple characters using C.S.P.S. and importing builds from Alcast's website without manually doing it all with every character? If so how?