The geology of Northern Elsweyr is incompatible with TES Lore

RaddlemanNumber7
✭✭✭✭✭
✭✭
TL;DR Elsweyr has a designed-in sequence of realistic rock strata that must have taken millions of years to form. The TES Lore timeline from the creation of Nirn onwards spans only a few thousand years. I think the Devs have some explaining to do.

Elsweyr has visible geology. This is by design. The web article "Discover Elsweyr & the Khajiit that Live There" says:

When coming up with Elsweyr’s environment, the team drew inspiration from multiple real-world sources....

Even when designing the new zone’s rocky environments such as the Scar, a giant canyon that cuts through the heart of the map, the team looked to the world around them for inspiration and direction.

“We researched different types of faults, including the kind of rocks they would generate, and investigated what the actual stratification of the rocks would be throughout the whole zone. In The Elder Scrolls Online, there’s a reason for everything. We never just come up with something; we look for the reasons why something is here to ensure it’s appropriate for the biome and has a real-world analogue.”

There’s always a logic to the way things are in Tamriel, grounding it in reality. Because of this attention to detail, it provides unique challenges for ESO’s designers, who are tasked with crafting the environments in a way that is visually appealing, realistic, and fun to play.


I think the Devs got too realistic this time. Way, way too realistic. They seem to have forgotten that geology is not just a bunch of rocks, it's a process.

When I look at the landscape of Elsweyr I see that the lowest stratum is a solid, undifferentiated block of sandstone-like rock. This base stratum has many weathered buttes and rock pinnacles sticking up from its surface: 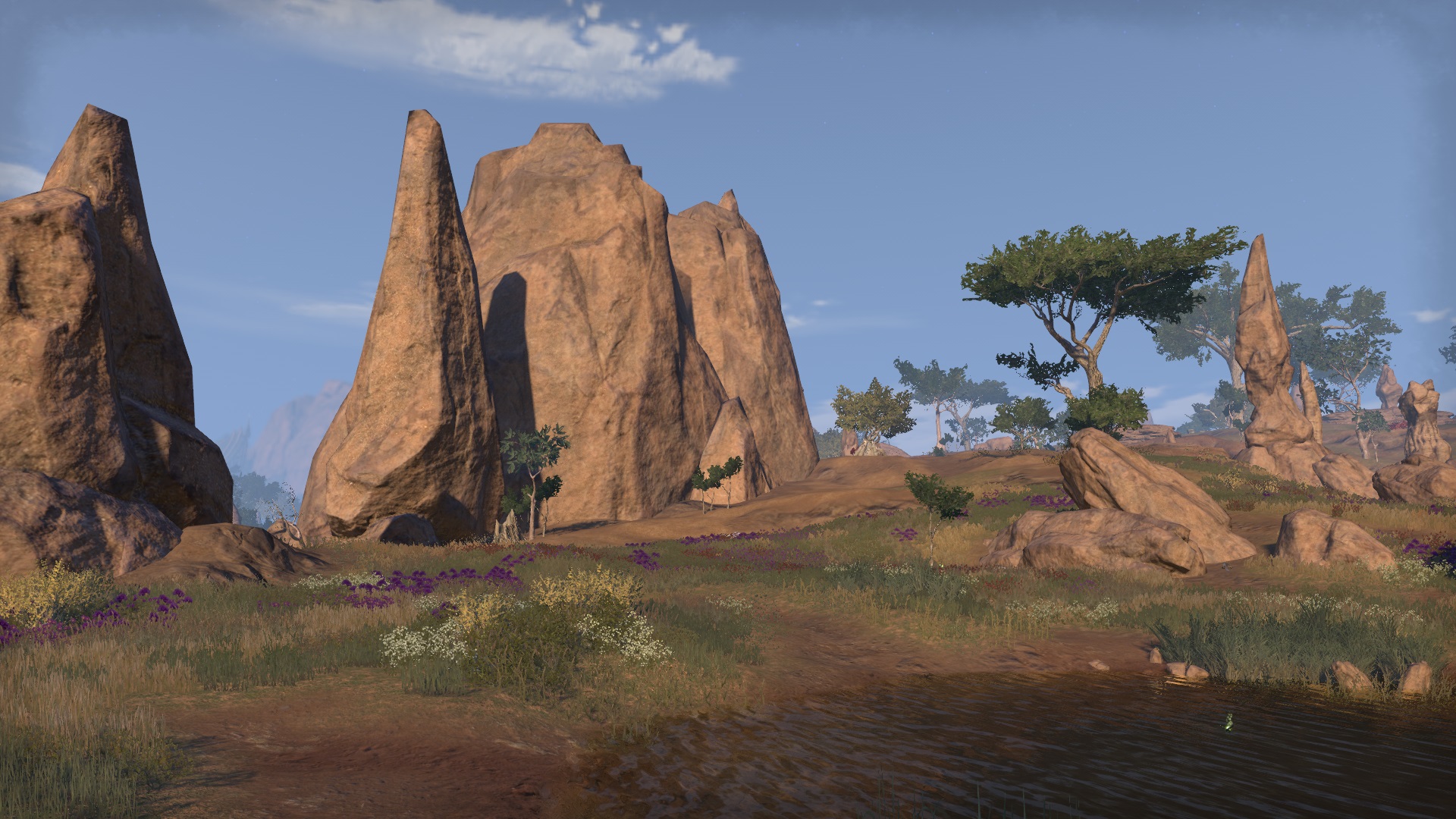 IRL geologists call pinnacles like these "yardangs". The Wikipedia article on yardangs says, "A yardang is a streamlined protuberance carved from bedrock or any consolidated or semiconsolidated material by the dual action of wind abrasion by dust and sand, and deflation which is the removal of loose material by wind turbulence."

The buttes and the yardangs are evidence of a very long and slow process of wind erosion.

In some places in Elsweyr there are also beds of sedimentary rock. These are quite deep: 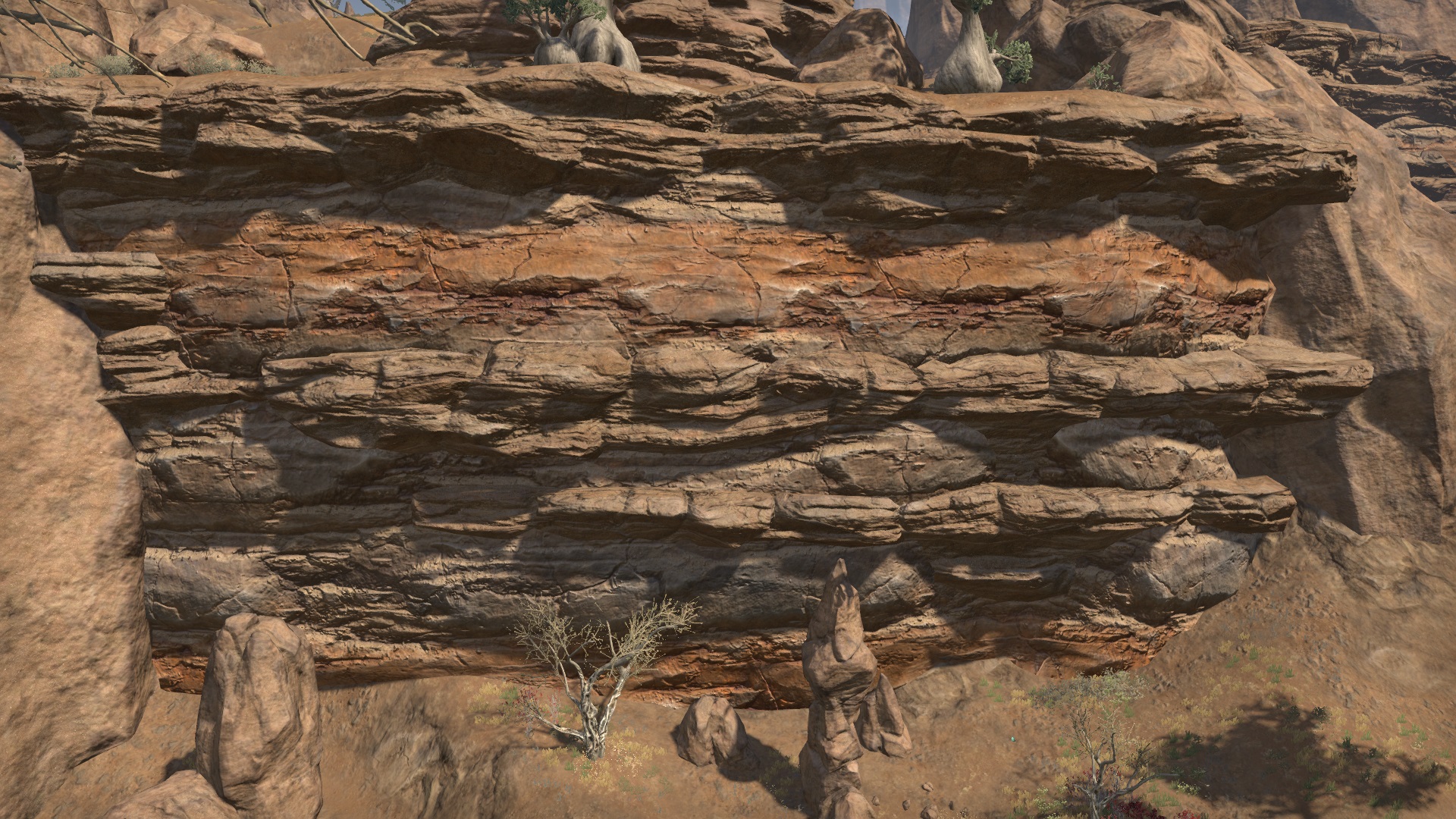 It can be seen that the sedimentary strata overlay the wind-eroded base stratum, filling in the spaces between the buttes and yardangs. This creates an unconformity. Wikipeida says - "An unconformity is a buried erosional or non-depositional surface separating two rock masses or strata of different ages, indicating that sediment deposition was not continuous. In general, the older layer was exposed to erosion for an interval of time before deposition of the younger."

This is all evidence of a geological process. The base layer of rock was exposed to wind erosion for long enough to allow the formation of the buttes and yardangs. Then the whole landscape must have been sunk beneath water for long enough to allow for the deposition of the sedimentary strata that fill the gaps between the buttes and yardangs. Long enough for those sediment layers to be changed into solid rock strata. The land surface must then have been lifted above the waves once more. A further time period must then have elapsed, long enough for a vast amount of the sedimentary strata to be eroded away, to form the landscape we can now see in Elsweyr. 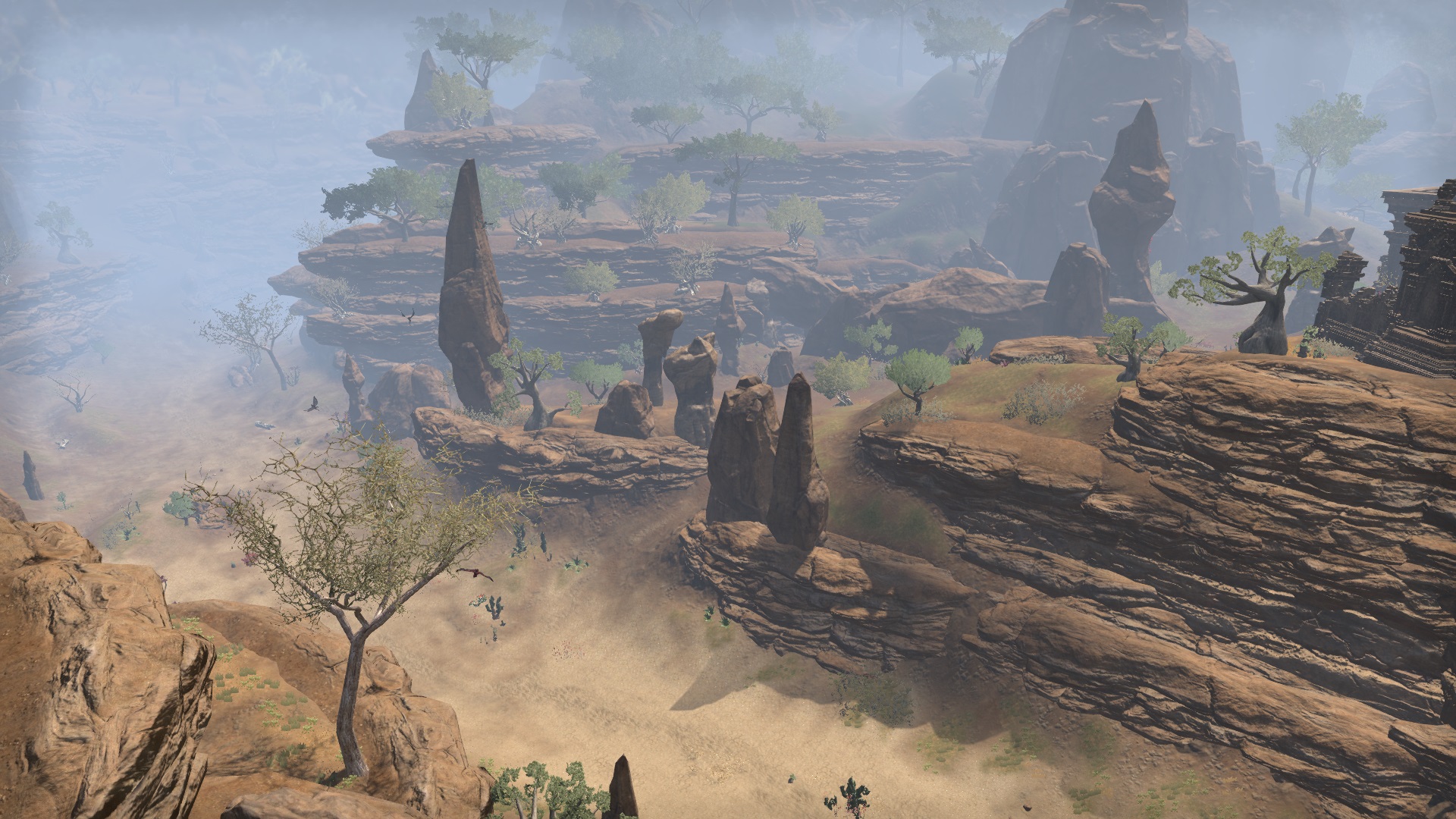 Notice how far down the sedimentary rock strata have been eroded away to expose the base stratum's buttes and yardangs once again.

I'd like to see how the Devs are going talk their way out of this one. I'm sure it would make a fascinating addition to TES Lore. Are we supposed to believe that a few thousand years ago the Earth Bones created Nirn in such a way that it was already many millions of years old? Hmmm, I seem to remember hearing that argument somewhere before.

Anyone got any better ideas to help us all resolve this lorific conundrum?
PC EU
#1 May 2019
6 Quote
Prev12Next
Home Forums English Lore
Sign In or Register to comment.