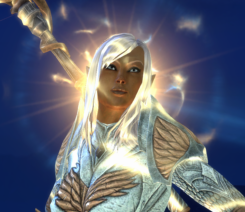 Yes, I'm a guy playing a female character. It's not weird. Shaddup!

She's what I guess you could call a "vanilla-plar", meaning she's very plain and maybe even a little "boring" in a way. She's a High Elf. She primarily uses class skills. She's not a vampire. She wears light armor. On the front bar, she uses sword and board. On the back bar, a restoration staff.

Aliyah utterly abhors the powers of darkness and she charges straight into battle with reckless courage. Though she is always on the hunt for undead, werewolves, necromancers, and daedra to purge, her true nature is that of a protector. She doesn't take pleasure in violence but she does what she must to ensure that the darkness never overtakes the light.

I don't win a whole lot but I'm playing the way I want to play so I have to take the losses as they come. I'm always on the forums asking for some of the weaknesses of Templars and light armor to be addressed. And even though I'm tempted to switch to another type of armor, I want to stick with light armor until things finally improve. Don't let the costume fool you, she's in all light armor.

Here's a video showing what it's like to TRY to PVP in battlegrounds with my set-up. My stats are shown in the video as well. They're not impressive but they're not too bad. Still, I get blown out of the water lots.

I changed my gear recently:
I still feel squishy as hell. I switched to a heavy chestplate and medium pants: