Just posted my latest build on my site and wanted to share it here. I've been running with Erlex and crew from Entropy Rising and thought people might enjoy the build I've been using on my Nightblade. Please leave me some comments if you have suggestions and thanks for reading in advance! 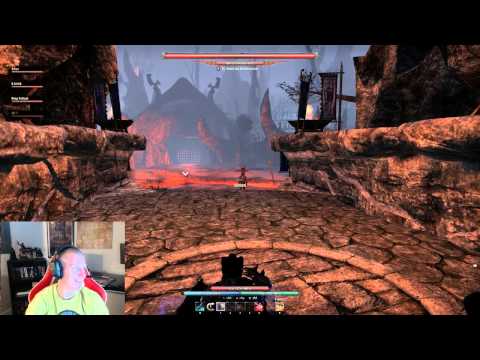 The original concept of the Blade Runner build remains the same, creating a DPS build that can deal high damage while maintaining the Veil of Blades ultimate for your group. Since my original post, I've learned a great deal and had a chance to practice on high-end content. Now that ESO patch 1.5 released Undaunted Pledges, I wanted to release something that anyone can pick up and enjoy dungeons without feeling underpowered. So if you're looking for a NB magicka build that can compete with the top DPS, this is it.

The character I'm using is King Foltest a Khajiit Nightblade on the Aldmeri Dominion faction North American server. Khajiit isn't the ideal racial choice for a magicka based build, but I don't plan on re-rolling a High Elf, Breton or Dark Elf. An interesting change is that I went with the Werewolf skill line after this was buffed in 1.5. Even though I'm entirely magicka based, the passive 15% stamina regeneration in humanoid form comes without a negative downside (poison damage only effects you while in Werewolf form). Additionally, if you're taking consistent damage, you have the option of slotting the Werewolf Transformation ultimate to generate six ultimate every three seconds!

This build is meant for end game trials, Dragonstar Arena Vet, and dungeons. It's not without flaws however as you'll be dependent on your healer more so than a Sorcerer DPS. Additionally, racial choice plays a huge part in how well you can pull this off because inherit magicka regeneration or elemental damage is a huge benefit.

Unlike my normal builds, this one swaps in and out abilities frequently. The above skill set is what I use on the final wave of Dragonstar Arena Veteran mode. Let me explain how this works and some optional abilities to swap in and out.

This is our single target setup that doesn't require bar swapping. The idea here is to keep up Focused Attacks, the Crippling Grasp damage over time (DoT), and weave light attacks in between Funnel Health.

Inner Light (morph of Mage Light | Mages Guild skill line) - 20% spell critical, duh need it. I hate having only four abilities but there's no way around it. Plus it gives us magicka recover via the Mages' Guild passive Magicka Controller.
Crippling Grasp (morph of Cripple | Siphoning skill line) - This is our hard hitting DoT that we want to keep up at all times. A trick to maximizing the damage is use Spell Symmetry PRIOR to combat. With Mage Guild at level 10, having the Might of the Guild passive automatically procs a 20% spell power for your next ability. Now that Crippling Grasp will hit 20% hard without using a potion! One step further is by starting combat off in stealth. Now it will get the benefit of the stealth bonus plus 20%. A great way to start off the fight.
Focused Attack (morph of Haste | Assassination skill line) - I really really like this ability after I've practice animation canceling (or what I call weaving). You're probably wondering why I took the morph that adds stamina recovery. Even magicka users need stamina especially for the more difficult content. You're constantly block casting, dodge rolling, and sprinting. Additionally, I highly recommend putting a Assassination ability here as the passives for Pressure Points and Hemorrhage have changed. You only receive these bonuses per ability slotted. Two good choices are Repear's Mark or Impale in this position.
Funnel Health (morph of Strife | Siphoning skill line) - The bread and butter damage ability with this build. Combine this with a light attack, you're looking at a consistent 1,000 damage. Not to mention casting this rewards us two ultimate via the Transfer passive out of the Siphoning tree. The animation is very fast making it easy to weave and if you have Focused Attack up, you'll do insane single target damage.
Spell Symmetry (morph of Equilibrium | Mages Guild skill line) - Good ol' life tap. I experimented with Siphoning Attacks and didn't like the damage reduction. This is a more risk rewards setup, but I run with good healers. Plus having this on our main bar gives us even more magicka regeneration and a spell power proc whenever we want. I generally don't cast this more than once because I want that 20% spell power proc to do damage. Make sure your healer knows when and why you're using this so you can have near limitless magicka.
[Ultimate] Veil of Blades (morph of Consuming Darkness | Shadow skill line) - OMG VEIL! This build will have you dropping these so often people will be begging you to join their team. I've experimented with Flawless Dawnbreaker in this slot and yes it's more single target damage. But I'd rather have a build that focuses on Veil than sole single target damage. I've even tried Soul Harvest here which isn't a bad idea. If something needs to die, keeping a 20% damage buff on them every six seconds isn't hard and you can literally nuke anything fast. Play around with what you like here.
Rotation

This our cleaning up the trash or building massive ultimate bar. You can use either Destro or Resto, you're choice. I've tested both extensively and it depends on the quality of your healer. Destro more risk but higher DPS, Resto less risk and added group benefit.

Inner Light (morph of Mage Light | Mages Guild skill line) - I'm not turning this sucker on and off so yea, 20% all the time.
Sap Essence (morph of Power Extraction | Siphoning Skill line) - Mega mega DPS and ultimate generation here. Pumps our weapon power, heals ourselves and others and hits pretty hard if you have high spell power. Remember that if you recast it, it'll reproc the weapon power buff. What I mean is, if you cast this first on six mobs, then you recast it after a few died, you'll get less weapon power. So if there's six around, cast it ONCE then go into a normal derpy Impulse spam.
Impale (morph Assassin's Blade | Assassination skill line) - Our finisher with decent range and can be used at 25% of the enemies health. I sometimes swap this out if were not facing a boss though it's worth keeping on for the Assassination skill line passives.
Elemental Ring (morph of Impulse | Destruction Staff skill line) - Originally I didn't think this was much benefit over Sap Essence though I was wrong. These two are meant to use together, Sap first to gain MASSIVE weapon power than Ring (which scales off of weapon power). A single crit with my gear can hit for 700+ on six targets. I'm usually averaging 3000 DPS on large pulls with this combo.
FLEX SLOT - I use a bunch of a different abilities here depending on the situation.
Refreshing Path (morph of Path of Darkness | Shadow skill line) - Thanks to Kypster's I found a great use for this ability. It has decent healing but the speed is remarkable. On wave eight of DSA this is a must or even to light torches in wave two. Oh and it can build ultimate out of combat as well.
Evil Hunter (morph of Expert Hunter | Fighters Guild skill line) - For fights with undead gobers, bring this along for unreal damage. It's easy to keep active since killing an undead enemy increases duration. An example is in Crypt of Hearts dungeon or wave nine in DSA Vet.
Repear's Mark (morph of Mark Target | Assassination skill line) - This is a beast mode single target DPS increase. Combine with Pierce Armor taunt that most tanks use and you'll be hitting very hard. Be careful here if you plan on taking damage from the enemy don't use!
Dark Shades (morph of Summon Shade | Shadow skill line)- Very rarely do I use this ability but it can make or break a pug dungeon run. If your tank is constantly dying, throw a Shade on the boss to reduce some damage.
Elemental Drain (morph of Weakness to Elements) - Typically I run with a Sorc that keeps Drain up as part of their build, but if not it's very important to keep on targets for magicka return and debuff. Note that the magicka return only counts for WHO casts it.
[Ultimate] Werewolf Transformation (no morph | World Werewolf skill line) - "How are you dropping Veil's that fast?" I get that a question a lot and here's how, the Werewolf passive Blood Rage which generates six ultimate while taking damage every three seconds. I've tested both Soul Harvest and this here and Transformation seems superior. On your AoE bar you'll be taking damage constantly. With this, one Sap Essence, and two Impulses I'll be able to drop Veil. I've once dropped four in a fight and my team loved it!
Rotation

You'll need about 1500 magicka prior to going AoE bananas
Make sure to use Sap Essence only once or when more mobs show up (initial fight had four then two more come in, then Sap and leave it alone)
Elemental Ring as magicka dictats
Chug a potion instead of swapping to bar one KEEP SPAMMING

Gear (thanks to Jeckll in his NB Desto build for suggestions)

Adds 77 magicka and 4% spell critical
FOUND: at VR 10 as a drop, I got mine in Upper Craglorn and they can be sold.
Torgu's Pact

Mundus Stone - I went with the Shadow (crits hit harder) since a lot of research suggest it adds DPS past 50% spell critical. I don't know the math though I noticed a DPS increase.

Glyphs - Nothing shocking here, use whatever is needed to get your spell and weapon damage near soft cap. Once your health is 2800 use magicka on everything else.
While Leveling

While leveling and unlocking the skills, I'd go with a Restoration Staff. If you're soloing you'll need this for self heals via Healing Springs. Most of these skills take a long time to get, so make sure you place one ability per skill tree on your bar at all times (Shadow, Siphoning and Assassination).

I do take all the passives in light armor and all in each skill line. I also go for the alchemy passive Medicinal Use which will help while leveling chugging down potions for self heals. Truly the better leveling build is my One-Shot-Willy and you might want to transition into this once you've reached end game.

Thanks for reading hopefully I'll be able to down Dragonstar Arena Veteran Mode.
In-game @deltiasgaming | deltiasgaming.com for Elder Scrolls Online [ESO / TESO] Guides
"It's a good day to be alive"
#1 November 2014
4 Quote
Home Forums English Player Guides
Sign In or Register to comment.