faeeichenlaub
✭✭✭✭
Tomorrow is the 21st of first seed! Azura be praised!
So what then does it mean, to truly seek Azura’s blessing?

The Lady of the Rose challenges her faithful to strive towards peace and works for the betterment of the affairs of the mortals who serve her.
This is evidenced by Culanwe’s calling to settle conflict between the Nedes & Ayelids, as well as her Revelation to our Orders inspirational founder Abbot Durak, who fled persecution in Orsinium to establish the Spirit wardens sanctuary in Stormhaven.

Lady Azura hears our suffering, and answers our calls for guidance with compassion.

Consider the Chimer, ancestors of the Velothi people, who undertook a pilgrimage to find a new land were they could seek the freedom to worship the “good” Daedra.
While other Daedric lords of Mephala & Boethia and have also been cited, It is our belief that credit for this Exodus was solely undertaken by the work of the Mother of Dawn and Dusk.
For only the Lady of Twilight offers compassion and guidance to those who have genuine adoration for her. These truths will be made crystal clear in this, my Pre-Hogithum Sermon to honor her.

St. Veloth, it is well recorded upon exodus from the Summerset Isles, stated to his pilgrims that he would be guided by a Giant Hawk in the sky, to the path in the new lands.
Upon reflection and prayer, it has been theorized to not have been a hawk, but a Winged Twilight sent from Moonshadow by Azura herself!
Azura alone sent a majestic guide to help the fledgling Chimer begin their Journey into the promised lands of what would become known as Morrowind.

And so it came to pass, that during this journey, the Pilgrims of Veloth would become trapped in a mountain passage in the land of Resdyn.
In great despair, they found themselves isolated. Before them, an insurmountable wall of ice blocked the way.
It was then when Azura revealed herself, her beautiful thunderous voice echoed down from the mountains.
saying unto them "Who are you, and why have you come to this place?”
"We are a people without a home,” Veloth humbly replied.

The Promise!
In compassion, Azura then emerged from the great frozen wall appearing as a young woman in her breezy ethereal vestments.
The pilgrims dropped to their knees in supplication to the Daedric Prince. She stated unto Veloth and the gathered followers,
"I am Chimer, Friend. I have come to lead you home, if you are willing to accept my challenge.”
"I demand a sacrifice of you, Veloth. Swear an oath that will make you a better Mer”
And with this profound, yet simple challenge, Azura had offered the promise of receiving her true Blessing,
the Gift for the Velothi Chimer to walk the path to transition into the Dunmer of today.

So it is written, that in contrition, Veloth rose to his feet and hoisted his mighty hammer and proclaimed,
"Never again shall I wield this tool or any other to slay a foe.
I have given my heart to my people, but now I shall give them more.
I shall dedicate my life and my soul to them.”

Azura was well pleased. Neither bloodthirsty Boethia nor the venomous Mephala would EVER have agreed to seeing an end to killing as just cause for reward? No! Unfathomable.
Azura alone had found in Veloth, her champion! A man of peace who would lay down arms and forgo bloodshed for the betterment of his people!

Thus, utterly radiant, the Lady of the Rose, turned and waved in an arc towards the wall of ice. Light emanated from the sun-star wielded within her hand.
In a flash of light, it had melted away the massive obstacle of ice, revealing entry to the Great Pass. Walking forward and the Chimer rose and followed.
Beyond the ice and snow lay a completely new and foreign land of fungus, ash and fire. A place where the Velothi would adapt and call home.

So take faith and affirmation in knowing this truth!
Azura is all knowing of events to come. She had foreseen that Veloth and his people would come to champion her, arriving in this new realm of Nirn occupied by the Dwemer who so foolishly underestimated our Lady's power and would soon bare her full wrath. Perhaps you could ask a Dwarven mystic of these events? Oh that’s right… you’ll have better luck talking to one of their remnant automatons.
You see what their arrogance got them with the heart of Lorkhan. >Poof< Goodbye! Yes my Brothers and Sisters, it is true that our Lady’s Vengeance is utterly swift, but just!
Because the path, like the stars and moons of Tamriel’s night sky, has already been fully charted by Lady Azura.
Such is her wisdom that she had foreseen the actions of Saint Veloth, which set into motion the disappearance of the cursed Dwemer, and will bring about the ultimate prophesied fate of the despicable Tribunal.
It is all part of our Goddesses greater and benevolent plan.

Azura’s Covenant
Some might say, because of the sins of the Tribunal false gods, Azura had cursed the Chimer by changing their appearance. This is a Blasphemy, perpetuated by the venomous false Gods Almalexia, Sotha Sil, and Vivec!
Let us dispense with such notions once and for all! Dunmer stand tall and rejoice for you are Azura’s chosen people! Her most cherished creation and the physical manifestations as the mortal reflection of Azura herself on Nirn.
Since 1E700, much like a Lunar Moth catepiller that goes into a Chrysalis, the Dunmer have emerged more capable and beautiful! As it is with many other races she has blessed.
For the Velothi and their descendants, the metamorphosis of the Dunmer people was, is, and always will remain an honor. Azura’s gift!
It is the attainment of a promise made, and a promise kept, to one day receive Azura’s favor and become In her own words… "Better Mer."

It is sweet irony then that the living false Gods are now cursed to look upon their subjects with the constant reminder of having betrayed Azura’s Commandments! Now crimson eyes, with the full depth of beauty of Azura's realm of Moonshadow, forever return their gaze upon the sinful power greedy faces of the Tribunal in consternation! The ashen skin of the Dunmeri people now serves as a selective adaptation to help the fledgling race endure the harsh climate of fire in which they now culturally thrive.
Azura’s Blessing is what will likely save the Dunmeri people from the inevitable destruction of Morrowind whenever the great object falls upon Nirn and causes Red mountain to erupt in flame
Azura’s knowing grace, will undoubtedly protect her children and all those that seek to worship her when called upon in their time of need.

So take heart faithful. Whether it be the ancient Chimer, the Bosmer, or the Khajiit or any people who seek her, Azura will guide ALL who come to her in devotion and will provide deliverance from their present suffering.
The Lady of the Rose represents the change you want to see in the world, and that change begins with you. This Hogithum, may we all continue to seek Azura’s blessing and wisdom.
May Azura watch over you. 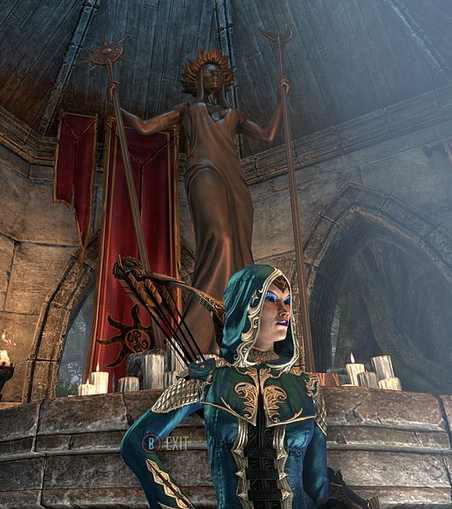 "Azura give me strength, Let my voice change the world as long as I am in it."
#1 March 2020
6 Quote
Home Forums English Fiction & Roleplaying
Sign In or Register to comment.