raasdal
✭✭✭✭✭
✭
Disclaimer; This is a cancerous cloaking proctard build, and i know it. Not ashamed either.

Hello everyone! My name is @raasdal, and i am addicted to speed. Non-sprint speed that is. And ever since they nerfed speed pots and swift, i have had problems with withdrawal symptons, not really being able to get a fix. Until i tried out this build here, that i want to share.

I wanted to share it because while there is nothing new in using procsets and health regen in no CP, i still think this build sets itself apart, by using concealed weapon on a stamblade and generally taking everything to the extreme, both in highs and lows.

I have no skill damage at all. 20K Stam and barely 2K Weapon Damage. I don't use Major Brutality or Major Savagery. My incap and relentless hits like wet noddles. The tooltip for incap on this build is a measly 7.5k!. When looking at enemy death recaps, more than 60-70% of our damage will come from procs. Therefore I am instead focusing entirely on penetration, which reaches 9.5K - which is quite alot for No CP standard.

I have extreme non-sprint speed, almost hitting cap when cloaked. (Have considered going for minor expedition to hit the cap, but it is just not worth the sacrifices)

I am not using any direct healing abilities. No vigor. No rally. Nothing. I survive by dodging and cloaking like a d***, and allow Lingering Health + Troll King to take us back to full.

While much of this is not new in itself, i do feel like i am taking things a notch further than many others have, and i honestly feel it is rewarded. In this game, there are thresholds that once crossed, will give competely broken results. Sometimes it will pay off to go all-in on some mechanics, even though it might not be "cost-efffective", simply because you will reach certain thresholds that will break game mechanics. Such an example is speed. Having high enough speed, will make you take less damage, simply because people can't target you.

With all that being said, the playstyle of this build is still just like another rolly polly cloaking a**hole NB build. Just faster!

Nobody wants to watch a full BG match. But unfortunately that is what you are going to get. There are two main reasons for this;

1. I am an idiot with movie editors, so making a fancy highlight video will take me forever. I tried before and really don't wanna put in those hours honestly.
2. A full BG match is just the most honest showcase of the build, flaws and all.

With that being said, i can recommend skipping to the 1:50 mark, which has a nice little 1vX scenario, if you just want to see a quick highlight. 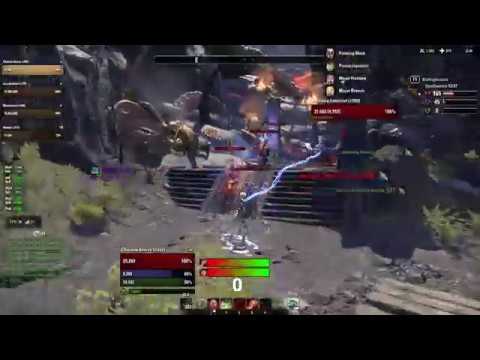 What is this build all about?

This build is focused on 3 things primarily; Speed, Health Regen and Procsets.

The primary thing, and what makes this build stand out from most others, is the heavy heavy investment into base speed / non-sprint cloaked speed. Especially the fact that we are slotting concealed weapon on backbar for cloaked speed. We are combining the following for a massive 93% boost to non-sprint speed, while cloaked;

Basically i have chosen to go for more speed at almost every decision possible. I could get some extra speed by going for Divines or track down a source of minor expedition, to reach cap of 100%. But have not found it to be worth the final sacrifice.

With this amount of speed when dodging into cloak, it gives such extreme mobility that i don't feel the need to use shade at all. It makes cloak so much more reliable as well. After we all experienced every stam character using 3 x Swift with Expedition Potions, i don't think i need to explain how much non-sprint speed can do for you.

Having this much speed, also means that slotting a snare removal becomes optional. That is because, even when affected by a heavy snare of 60%, that will just bring this build down to just below normal speed. And even in those cases, i find that i can ride off the snare while cloaked, without any issues. Snares only really become a problem when used in combination with cloak-denial. But that happens very rarely and will almost always be a mistake on my part, for allowing that scenario to happen at all.

Here comes some old cheese. Steed Mundus and Orzorgas Gold Food combined with Heavy Armor (20%), Nightblade Passives (15%) and Health Potion (20%) provides passive base health regen of 1500. That is a very nice HoT to have. When Troll King procs, it will go up to 4K roughly. The HoT now becomes a very decent burst heal every 2 seconds. Dodging into cloak from 30% health will put you back to full health when exiting cloak - without the need to cast any heals.

On top of the health regen, we also have the lingering health potion, which is the key to proccing Troll King passively as well.

With Troll King active, we have roughly 2250 passive HPS. As with all Health Regen builds, the word passive is the key to why it is so powerful. It requires 0 resources and 0 GCD. But by now, i don't think i have to explain the strenghts of health regen in no CP. That's old news.

This is the oldest cheese of the build. Everyone should be aware of the synergy between Flurry and RM / WoF. But just in case, i'll highlight here;

With 1 cast of Flurry, we get the following proc chances;

And this is NOT accounting for the light attack weave OR the Posion Injection / Rending Slashes that should already be running on your enemy, giving even further proc chances.

As a nightblade, we then also get 8% damage boost from Ambush and 20% from incap, combining for a massive 30% damage increase to our procs (calculating them multiplicatively here, but i know there are new calculations regarding vulnerability). On top of that, we have very decent penetration for both our skills and procsets. 5280 from mark target. 1500 from Bosmer. 2752 from sharpened on both DW weapons. That totals out to 9.532, which is indeed very high for a Heavy Armor build in No CP. The key here of course, is that the Penetration benefits both our skills and our procs.

So while this build has almost no stamina and weapon damage, it will be able to take down even the tankier players. Anyone not in the "tanky" range, will get facemelted. RM procs will frequently hit people for close to 5K. And this is on a 2 sec cooldown.

Now, here are the details;

Bow Bar
DW Bar
On all these skills, very little is not flexible. Only 3 skills are absolutely essential for this build. Cloak, Flurry and Concealed Weapon. Everything can be changed up depending on playstyle and other choices.

Using Poison Arrow and Rending Slashes are really not needed in a 1v1, since Bloodthirst will proc all procsets on cooldown anyway. BUT they come in really handy, during high pressure 1vX. This is because having Poison Arrow and Rending Slashes running on your enemies, will make your sets proc even when being defensive. They will not pull you out of cloak either. So this means that you can keep up pressure, while dodging around and cloaking up.