Jaimeh
✭✭✭✭✭
✭✭✭✭
This is a guide on how to successfully pick-pocket your way to collecting the House (Hlaalu, Telvanni, Redoran) motifs from the Morrowind DLC. It’s by no means the only way, but I found the area in question having the best risk/reward ratio, compared to rest of Vvardenfell. 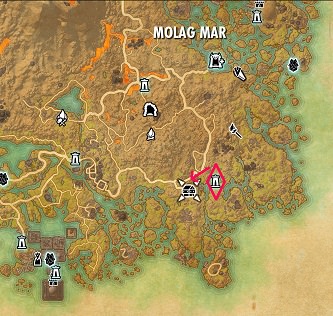 Next to the shrine we encounter our first NPC: Ufgalash. It’s safe to pick-pocket her at your leisure, since the only other NPC around is a quest giver who stands well out of sight. 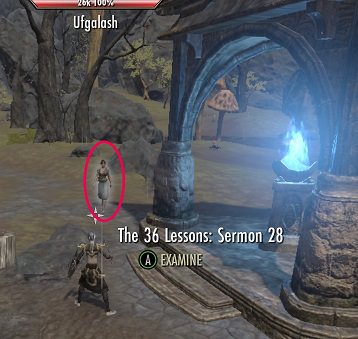 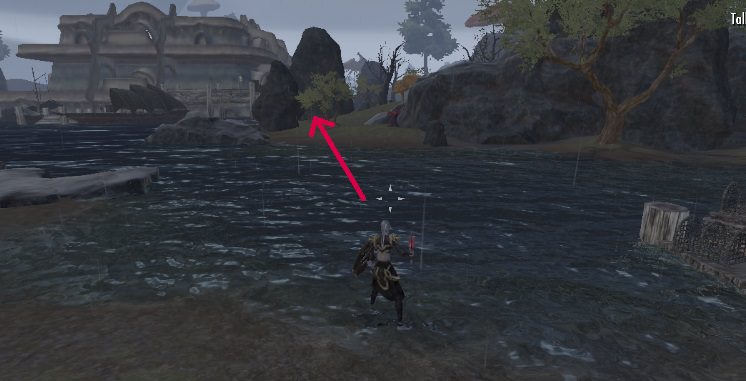 Then you will move west, towards the building, until you come across the second NPC, Daynil Vidron. His fishing spot is secluded, so again you can pick-pocket and BoW him safely. On the right side of this fisherman there is a bridge watched over by a guard (G1). You can avoid him entirely by walking towards the bridge through the boulders, or you can cloak past him. 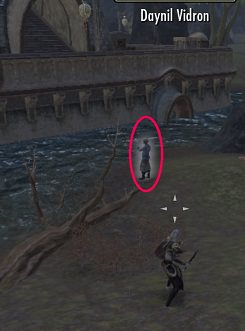 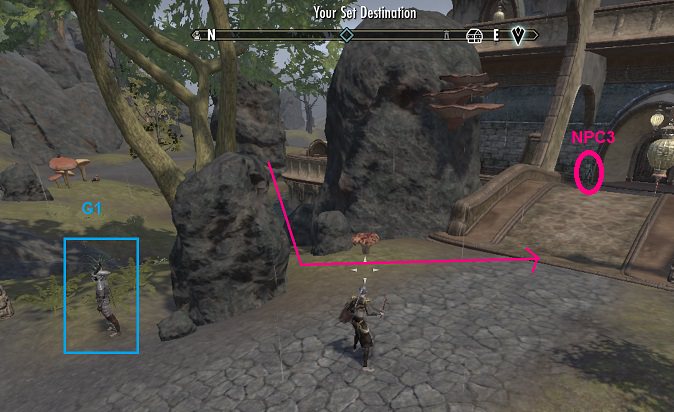 This bridge is one of two ways in which you can access the building—we’ll encounter the second one below. On the other side of the bridge there is a Buoyant Armiger NPC; sneak behind him, and do the deed. 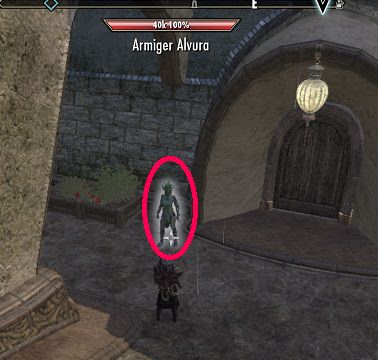 Next, you will move to your right as you’re facing the building, until you come across Researcher Gaelion. This NPC will sit on a bench for a bit, and will then turn around the corner, and stand on the balcony. If you want to pick-pocket him while he’s sitting down, you can jump on the bench behind him. Again, there is no chance to get detected. 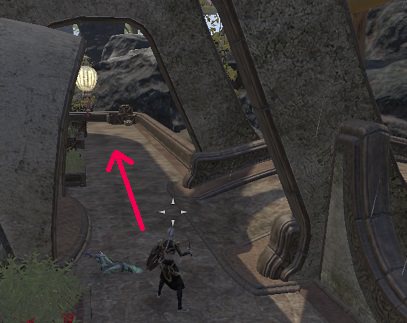 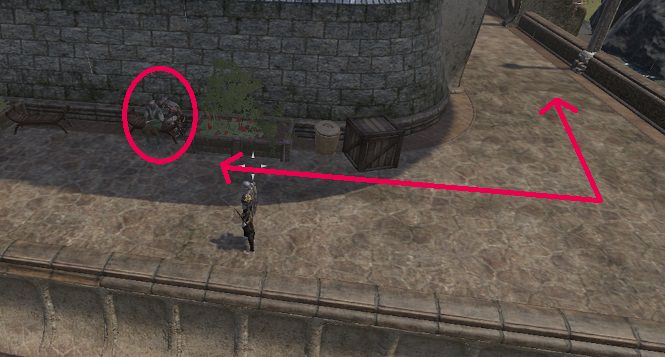 You will keep moving to your right as you’re facing the building, and on the following corner you will find Osanna Merick, our fifth NPC. 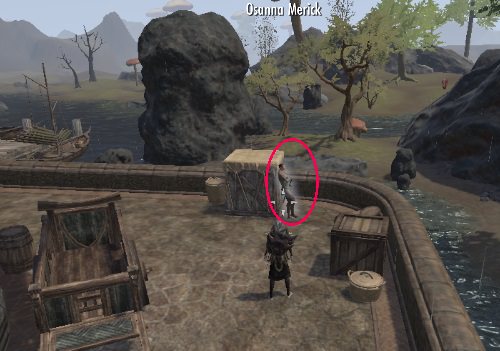 In order to pick-pocket/BoW her successfully, you will need to be aware of the movement of the second guard (G2), who is further down, but whose patrol overlaps with the location of Osanna, as well as the location of NPC6. This guard: 1) rests on the bench next to NPC6, 2) walks a couple of steps away towards the docks, 3) comes back to rest on the bench, 4) walks towards Osanna and round the corner, 5) stands mid-way through the balcony on the other side of the corner, 6) comes back towards Osanna, sits on the bench, and repeats his routine. 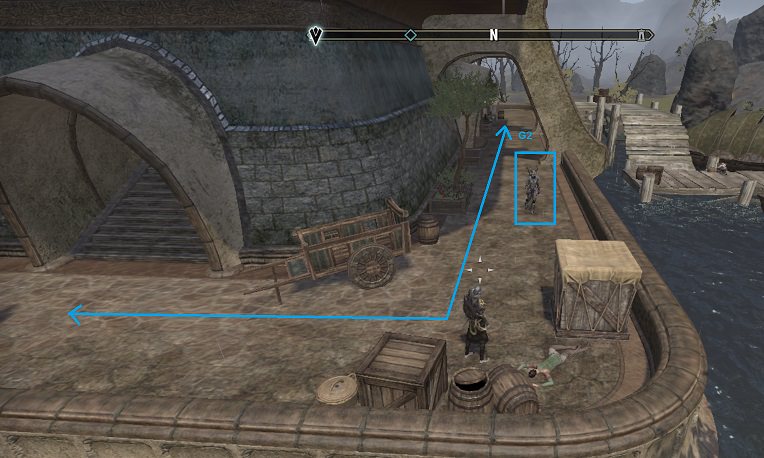 The best times to loot Osanna are when he sits on the bench, or when he turns the corner. The best time to loot NPC6, another Armiger, is when the guard walks past Osanna. 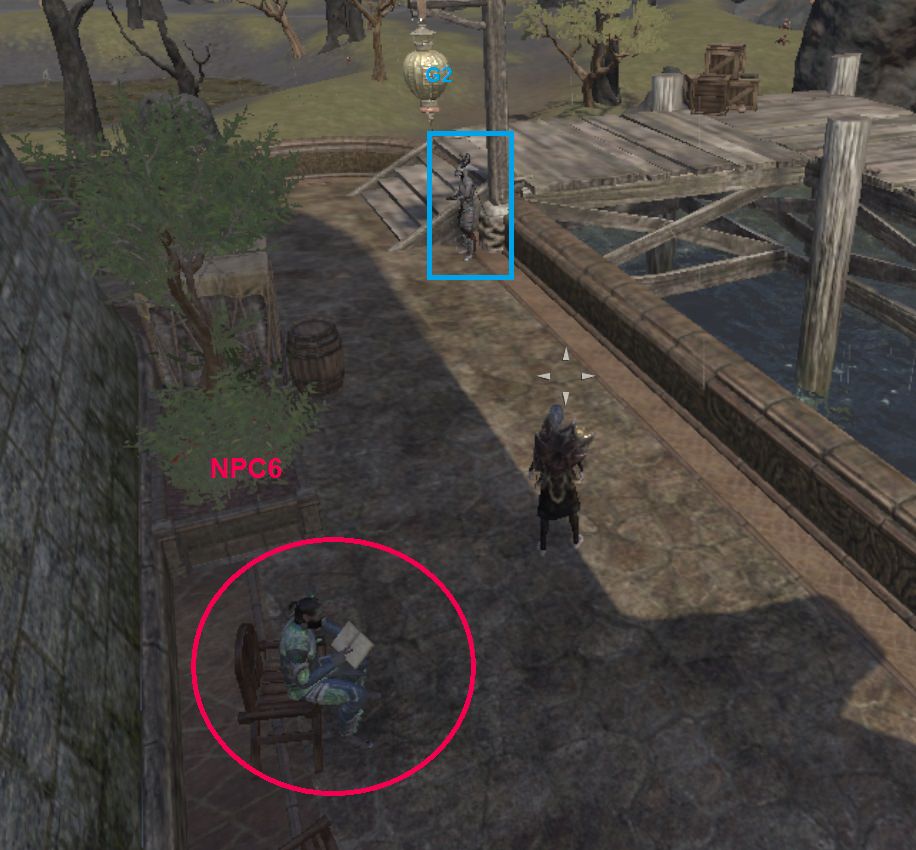 After all that excitement we finally have an easily-looted NPC on the docks, opposite the benches. You won’t get spotted even when the guard stands in front of the pier. A propos, this pier is the second way to access the building from the wayshrine. 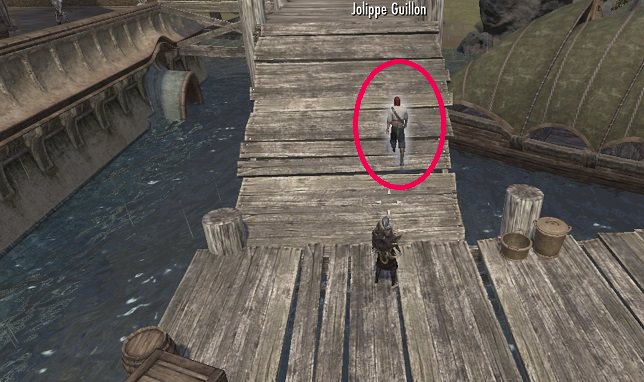 Turning the corner by the docks, we climb the stairs to arrive on the second floor. Be advised that the third and final guard goes up and down these steps as well, so either cloak, or wait for him to come down and then move up. When you reach the landing you come to a terrace that houses 4 NPCs and the aforementioned guard. You don’t need to worry too much about him because he doesn’t linger for too long on the terrace. He will: 1) move up and down on the balcony to left side of the terrace, 2) enter the terrace and stay still for a minute, 3) climb down the stairs and walk across the balcony downstairs, and then repeat this pattern. The best time to loot the NPCs is when he is downstairs, or out on the balcony upstairs. 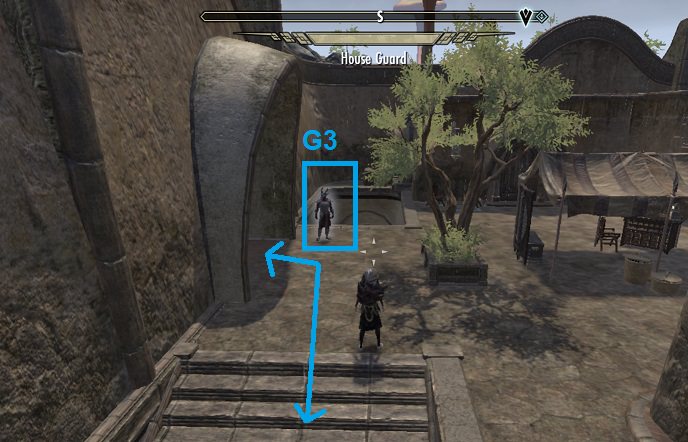 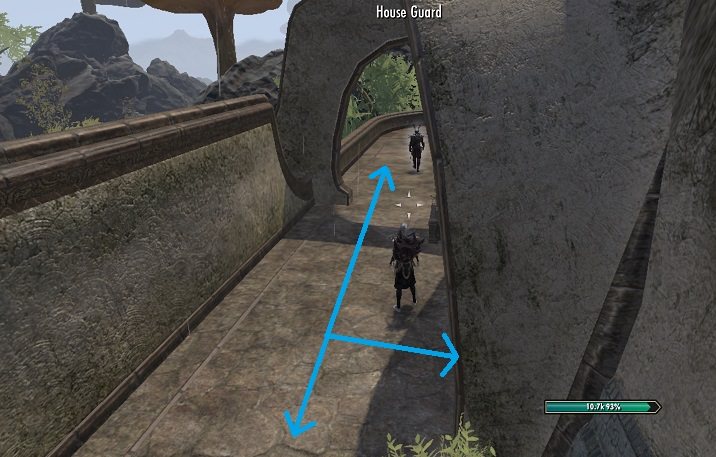 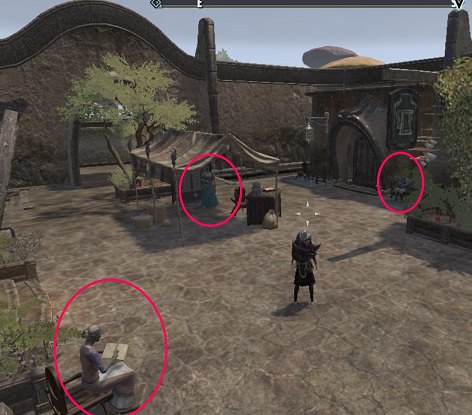 The first NPC you want to loot is Aymillo Alor. Wait until she gets up from her chair and walks outside the terrace, but be mindful of another NPC (Researcher Svarjarda) outside on the balcony, that passes Aymillo by on her way to the main terrace. Alternatively, you can loot/BoW Sverjarda first, in order to avoid accidental detection; she is found sitting on a bench at the balcony for a bit, and then she moves to go inside the terrace, and back out again. 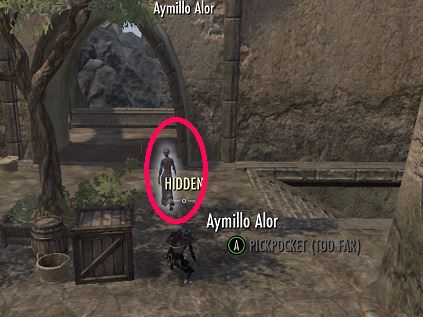 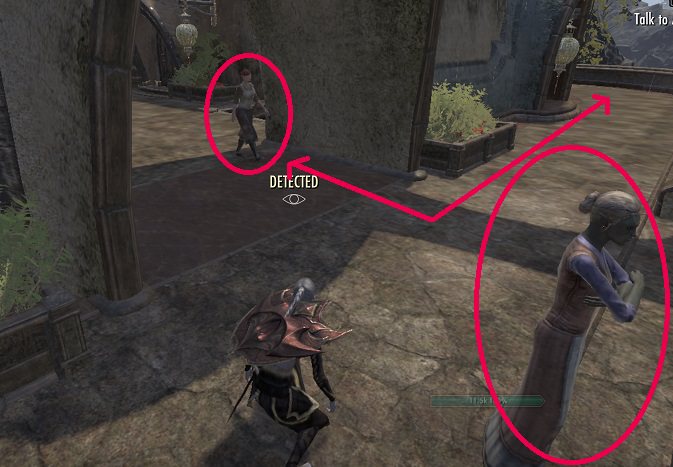 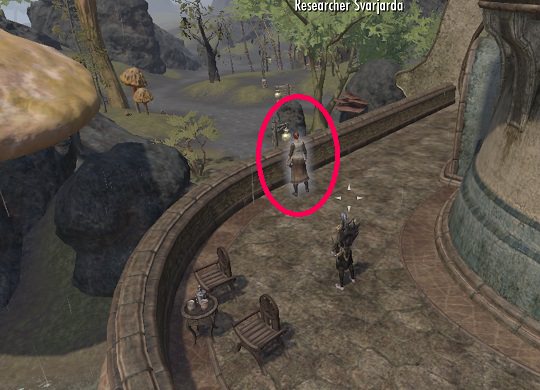 When you are done with these two NPCs, come back to the terrace, make a note of where G3 is, and proceed to pick-pocket Studies-Many-Things, which is the NPC sitting on the bench in the corner (you will have to jump on the bench). 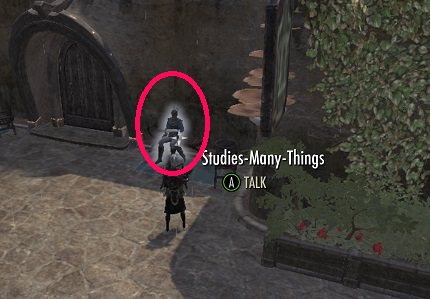 The final NPC is Ruflzub, and in order to pick-pocket/BoW her you will need to climb on the chest behind her. Sometimes the chest is open, depending on whether another player is doing the associated quest in the area, but you can still climb on top, albeit with a little more difficulty. After killing Ruflzub, you can cross the terrace and jump down (please be careful of ESO’s biggest bane of existence: fall damage) and you will find yourself back on the bridge, so that you can go ahead and loot the fisherman NPC, and thus repeat the loop. 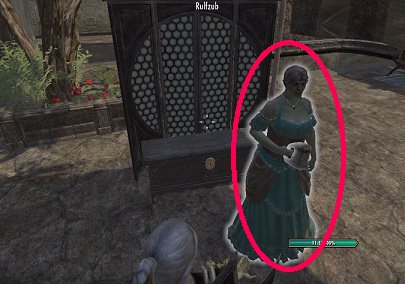 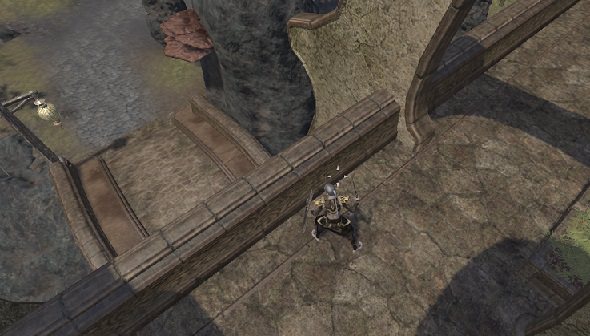 One last thing I’d like to note is that you can also loot the NPCs at the inn inside the building, but they are so closely packed, that in my opinion looting them is not worth the bounty, and also breaks the fluidity of the route (the fisherman spawns around the time you are done with the NPCs on the terrace). For the same reason, I don’t bother with looting NPC1 again, until I’m ready to go back to the wayshrine.

I hope this was helpful and not too confusing! I only thieve about an hour/day, as I’m not very patient, but I almost always get a motif drop per session, so this route has been working nicely for me. I hope this is the case with everyone else too. Finally, please remember to observe the thieving etiquette (yes, it’s a thing

), BoW’ing your marks, so that they spawn promptly for next player coming along, and above all: profit!