Home Forums English Add-Ons & UI Mods
Sign In
The Firesong DLC and Update 36 base game patch are now available to test on the PTS! You can read the latest patch notes here: https://forums.elderscrollsonline.com/en/categories/pts
Maintenance for the week of September 26:
• PC/Mac: No maintenance – September 26 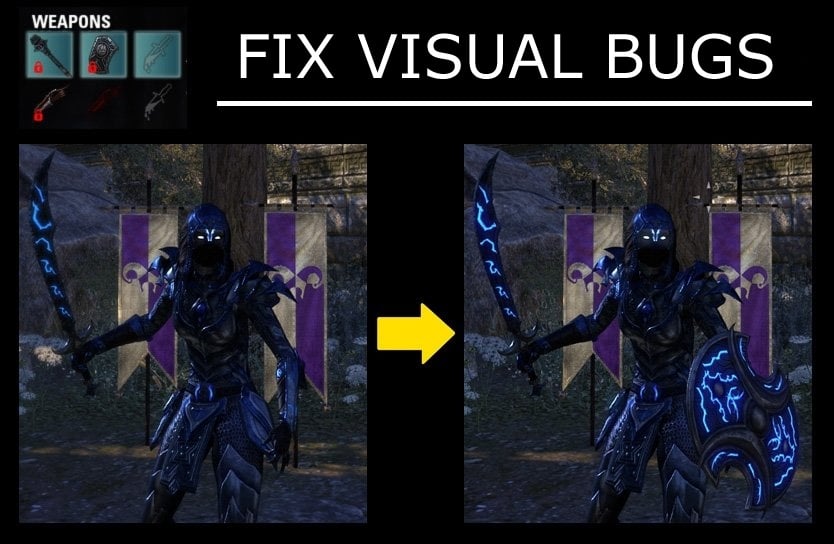 This addon has been completely re-written from scratch as the invisible weapons bug appears to have crept back into the game recently. Fix Visual Bugs gives you two new keybinds, one to toggle your outfit (which fixes many visual bugs) and another to unequip and re-equip your active weapon, which fixes the invisible weapon bug.

There are no automated functions anymore; nothing will run on bar swap or anything else that might slow you down. This is a zero performance cost keybinder addon that gives you some quick access functions to fix common visual glitches in Elder Scrolls Online.

(Optionally you can also type "/fvb 1" without quotes to toggle outfits or "/fvb 2" to toggle active weapon.)

NOTE: You must be out of combat in order to use the keybinds, otherwise they do nothing. Additionally, due to game engine limitations the addon must sheath your weapon if it is out in order to perform the update, so if you happen to pull your weapon back out during that fraction of a second it is updating there is a slight change your weapon won't be re-equipped and you'll have to equip it manually.