Below is my written guide for the latest dungeon for Waking Flame DLC. You can find the full post on my website here.

Welcome to the written guide for the Dread Cellar Dungeon which includes Veteran, Hard Modes and all the Secret bosses. This will cover all the mechanics for the dungeons along with pictures for important aspects of completing the dungeon.  This was added in ESO Update 31 and comes with very good gear to collect and is one of the most challenging dungeons to date! 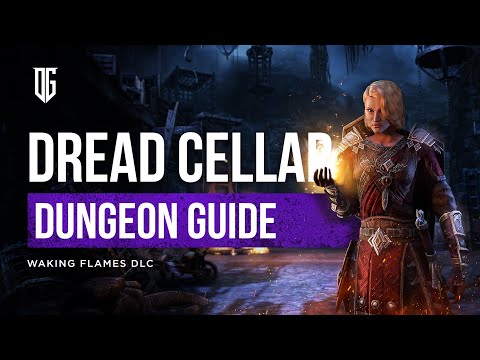 About The Dread Cellar Dungeon

The Dread Cellar dungeon contains three main bosses and three secret bosses.  Each main boss has a hard mode that you can activate which you'll need to complete each subsequent hard mode if your goal is to finish all the hard modes in the dungeons.

This dungeon is also compromised of three secret bosses each granting a special buff that remains with you throughout the instance.  You can use a synergy after you've obtained the secret bosses and summon them to your aid for one minute during the fight.  It's highly recommended you do all three secret bosses if your goal is to complete all hard modes, as they are extremely challenging without the buffs.


Step 2: you'll need to simultaneously activate crystals in order for a portal to spawn allowing you entrance in the secret boss area.
Shard
Portal

Step 3: grab two more braziers and place at each crystal in order to unlock the boss fight.  Kill the boss in order to given their buff along with the ability to summon them in subsequent boss fights.