Khefremat
Soul Shriven
Welcome all. What you'll be reading here is the result of quiet consideration, research, patience, planning, and a deal of passion inspired by extensive sources. For a while now I've envisioned a Vampire-themed guild that makes full use of their background and in-game lore in a way that matches racial significance in RP settings, yet is fully integrated with your personal experience and doesn't distract from it by forcing unnatural RP in estranged situations. Before anything else, please know that this is an English speaking guild. So, onward ...

You can use the up and down arrow keys to navigate the page. 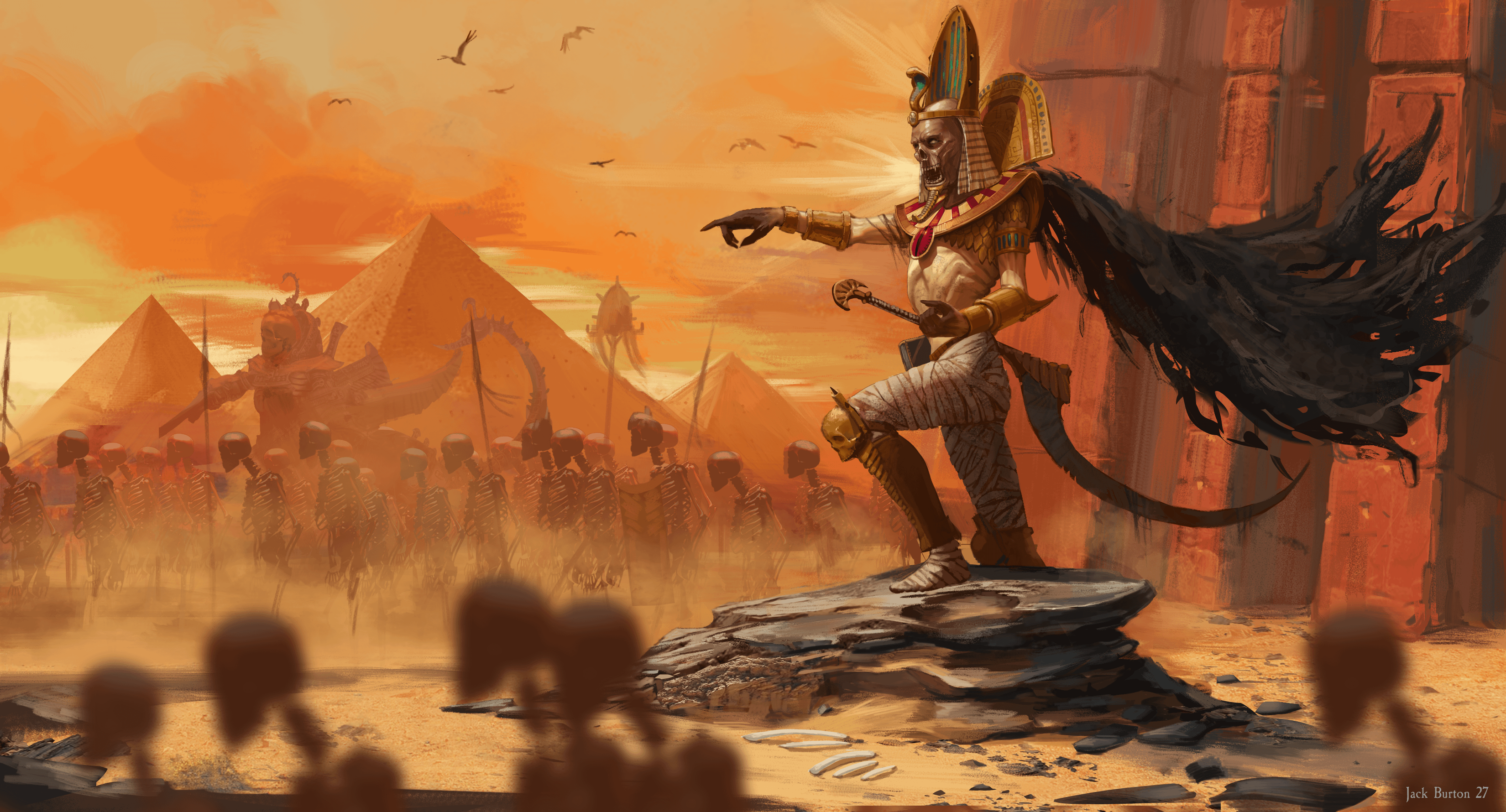 The Terrible Desert Wisdom
" The Anthotis Clan is one of the most elusively formidable vampire clans in Tamriel, and any information about them comes only from rumour and conjecture. Claiming great renown for their mighty intelligence, this breed manifest as exemplary scholars, visionaries, leaders and master sorcerers casting their dominion over the sands. They inhabit the Great Alik'r and reported sightings of their black presence come from all cardinal points of the province, often collected post-mortem. The Alik'r is a vast and endless ocean of winding dunes and shifting sands, and the Anthotis are skilled in traversing such a treacherous, but picturesque landscape. There is a strange, but alluring phenomenon in the Alik'r, where a vast red mist rises from the terrain, and apparently some people like to attribute the mist to the blood from the Anthotis' victims, just to scare children and travellers away from foolish expeditions. However, beyond the guise of unnerving fable exists one of the greatest terrors the Alik'r has ever seen ... they walk in ancient quiet, observing, collecting, and worst of all — acting. "

The Anthotis bloodline consists of several familial tribes, divided according to the class and culture of their *Progenitor (alternatively Antecedent as adopted in Khefremata), all with differing achievements, backgrounds, iconography (tribe symbols) and aspirations yet maintaining one core focus at all times - Power. Each member carries great pride in their lineage and strives to serve it justice in the lowly mortal world of Tamriel, avoiding dishonour and devaluation at all costs. The lineages are exceptionally secretive and distrusting toward outsiders, walking amongst the common populace like giants marching through wandering herds of cattle. For this reason, public information on the clan's operations will be limited.

Their society consists of:

Chiefly, a profound pride taken in their lineage and clan.

A true Bloodline that does not permit initiation of outsider-Vampires, and never initiates where it is not beneficial.

A distinctly Vampiric overview of the world around them.

An unwavering desire for Mastery over their disciplines and abilities.

A near-entire detachment from mortal life. ~

A shared understanding for the hierarchy of Clan objectives relative to base wants.

An ancient recognition of Yokudan culture and language.

A private elite force of the most dangerous Vampires the Clan has to offer.

An evolving administrative structure composed for efficiency, outlawing misrule and favouring the usage of co-sanctioned edicts.

A reverence for each member as their own immensely capable immortal.And much more.

Tribe Khefrematu
The only (partially) publicly disclosed tribe as this time, Khefrematu owes their title and darkly inspired culture of Khefremata to the Southern Desert region of Khefrem. Unlike their brethren from neighbouring tribes who remained in the North or travelled West or East, they ventured South riding volatile Vampiric beasts and many assimilated with the regal society of Abah's Landing and Khefrem Academy. They are an exclusively Nightblade lineage with an emphasis on Blood Sorcery, striving to achieve inner mastery over the practice of Sanguinomancy and being directly responsible for many of the stories of the Alik'r Red Mists. Predatory and unapologetically cruel towards mortals, many members of this tribe choose to adopt a more "old" and "accurate" visage openly representing their evolved Vampiric heritage and Yokudan ancestry, using powers of hypnosis to bend knees and enamour royalty. For this reason amongst others, the weak ruling courts of Abah's Landing have pathetically employed patrolling guardsmen and women to monitor the streets for signs of their hunting practices. This tribe's ilk are often mistaken for Ra-Netu by unaware mortals.

*****3 If you are interested in forming this guild alongside me, Anthotis requires Antecedents to sire its tribes. In agreeing to be a Progenitor you will have complete narrative freedom over the culture, goals, ambitions and dictated responsibilities of your line (as it will take after you), so long as they fall within the global culture of the Clan itself. This means you cannot just copy and paste your culture from VTMB, but you are free to take inspiration as I have, combining multiple elements of narrative Vampire fiction. You may choose a more neutrally affiliated role as myself, a tribe that views others as inferior for historical / power-relative reasons, the most bestial tribe of the Clan that wreaks havoc on all innocents in its wake, or a tribe that doesn't prioritize combat and instead focuses on social / economical manipulation, etc. The choice is yours and options endless. You absolutely may choose to be tyrannical, but you do so at your own risk, for any sustained practice that threatens the life of the clan as a whole will be outlawed and potentially lead to banishment, with your being replaced by your second-in-command or first-turned and so on. For this reason all Antecedents must sire at least three underlings. You should build the priorities of your culture around your class with Vampiric sensibility, focusing on longevity for your tribe. Inspiration from the Warhammer series is recommended, integrating your concepts with TES lore. Anthotis searches for intelligent, creative, mature and adult 18+ members committed to the long term sustainability of this guild, that are willing to work alongside each-other and contribute to the growth of our lore and society. For Antecedents, experienced players well versed in Vampire-fiction and/or Tamrielic lore are preferred, but not required. There is a minimum CP requirement of 200 to fill this role for gameplay experience purposes. We will be a society that works together for the good of our own. Assistance will be available to all members that need it, and members will not go unanswered in awkward silence. We are a community that will be familiar with each-other and aware of each-other. Of course there will be people who will attempt to join to take advantage of our assistance and leave, or people who are not at all serious in trying to make this project a reality. *2 This is why a strong vetting process will be necessary and outlined below. We are not going to function as your typical social guild and new memberships will be uncommon. Recruitment may cease altogether at certain milestones for unnamed periods of time to allow members to get to know each-other. This will be a slow and methodical process that hopefully builds into something admirable over time. Leaving and Excommunication will be exceptionally rare , and practically unheard of for Antecedents. *3 The principal requirement to be an Antecedent is that you must be gifted the unadulterated and unformed blood by Bloodfiends within Bangkorai. This allows you to sire a true Bloodline within the society, as all future members will be your direct descendants. It's also a rite of initial commitment.

... members may, under certain unusual circumstances, be privy to rare permanent traits given to them by RNG (from a pre-written sheet), with dramatically unfavourable odds for the most powerful traits available. Essentially a lottery system. This can be implemented for every 5th or (enter high value here) new member within a tribe for balance purposes, and should be a rare opportunity only ever given to an entirely random few throughout the lifetime of the tribe's hierarchy. 99% of any given Tribe will not have a trait, and almost none if any at all of the 1% will have the rarest traits.
Traits can be added as member notices within the guild roster system.
I.e: "Small Trait Carrier: Noble Blood. Able to sire without sponsors. Must still make an appeal."


These 'traits' may allow singular clan-related abilities of great influence, such as ...

The ability to mass-call others to a city-wide blood hunt regardless of leadership position within their tribe.
The ability to command the tribe to focus finances on gaining economic control of a particular city through the markets.
The ability to control Werewolves -- Werewolves this Vampire knows are permitted to assist in Tribe conflicts as Calvary units.

*For the rarest and most dangerous of all, options could go as far as the ability to initiate war with one rival guild (or even Tribe, under suitable circumstances), regardless of leadership position.
Or to summon members to a specific Alliance campaign, dropping their current one and waging long-term war for specific objectives.


... These events could be announced by Antecedents or their Officers as active edicts within the guild channel.
*Such actions come with great responsibility and potentially dire consequences.
There should be reasoning in your decision to use these traits.
All traits, if permitted, can be entirely dictated by the Antecedent's circle as he or she chooses.
An Antecedent could choose to raise the chances of these traits for the Vampires he/she has sired themselves, but they should always rely on chance and be fair to the community.
Traits should be unique to tribes and designed for that lineage, and should not be seen duplicated in members of differing heritage.

Disclaimer: These are just random poorly thought-out examples that are meant to serve as a tangential idea more than any real framework.
Please don't take them to represent the totality of what this concept has to offer.


This is a completely optional concept and could be scrapped entirely, or simply outlawed (unused) by other tribes.
*2 Clan leadership will not function like most guilds, as Anthotis is a bloodline not ruled over by any but inherited by all members. Therefore, leadership ranks within the guild are available for capable leaders of the clan itself. Your responsibility in this role will be less managing the affairs of common members and more sitting at the roundtable and developing centrally progressive ideas and practices to further us all, overviewing reports from your officers if you have any, and making calculated decisions on what to do next.

*2 Anthotis will be a selective, private and secretive Clan that does not turn others casually. Regardless of your tribe, you cannot join and then immediately initiate your best friend without making an appeal for their initiation into the guild. Your appeal must be sponsored by 4 other members. Understand that this may be declined for numerous reasons, though sponsors will increase your chances. Failing to adhere to these fundamental rules will result in excommunication -- known as being made Tobr'a in-house (Khefrematu). The Antecedent of your tribe will have the final say in the matter of new applicants, but may appoint a Vizier / Officer-equivalent or even a private council to oversee such concerns in their stead. There must always exist an administrative process for applications, and tribes should be notified of new members in the global Discord.

If you are viewing this post as a prospective member, please stick around and remain in touch. I or we will have a discord set up shortly if things go well with this initial recruitment. Regardless, I will always keep Anthotis around and waiting. Respond to this post letting me know that you are serious about making this happen. Don't be shy in sharing your ideas or expanding these concepts, I look forward to getting into discussion and planning with some creative people. Also looking for members talented in Photoshop to create tribe-symbols for the discords.

My planned format for this guild will be one central House that contains all tribe members serving as a family tree (Anthotis), and differing guilds for each tribe.

I am Khefremat, or @ Anthotis if you want to contact me within ESO.