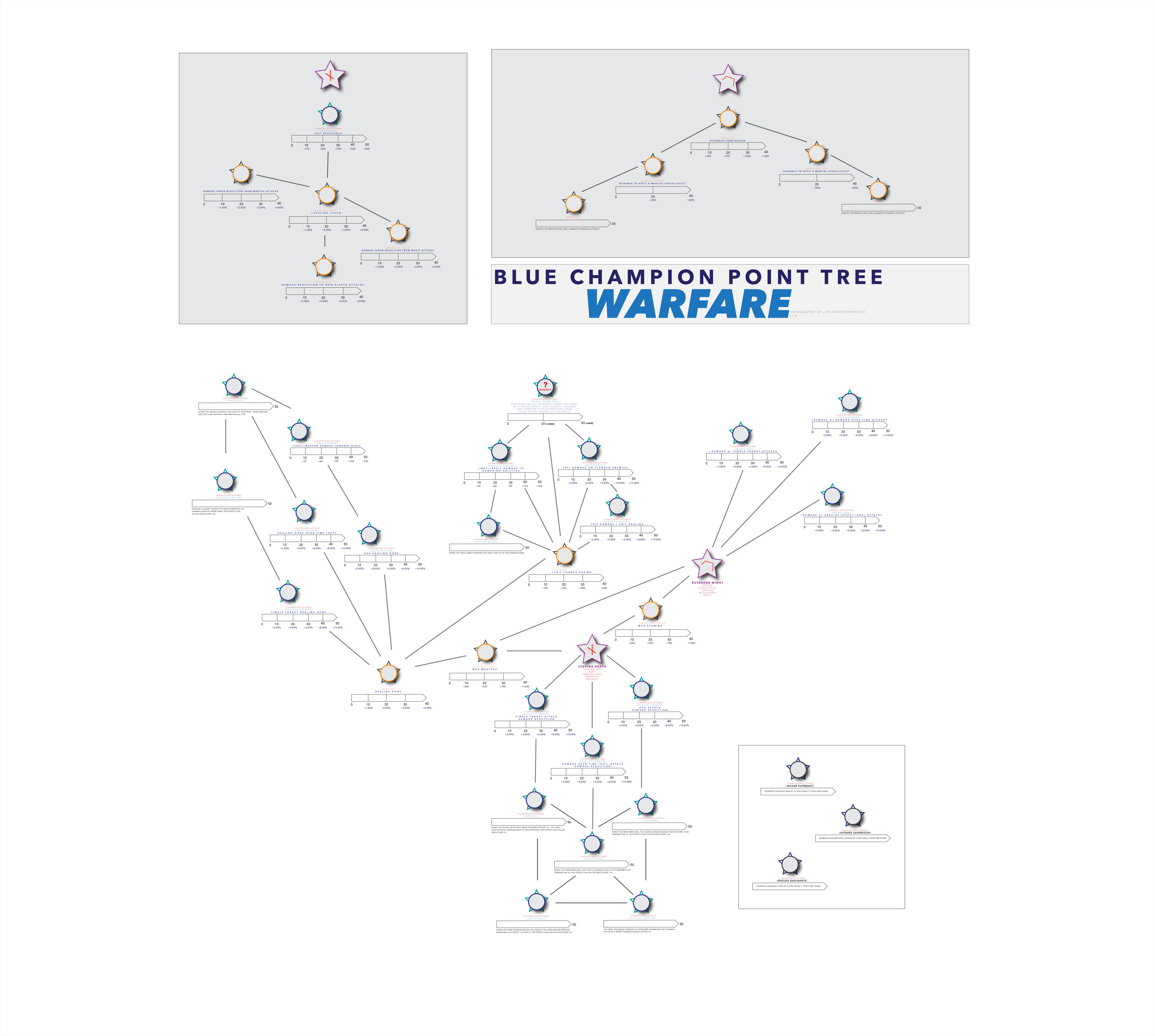 Sometimes you can skip to further nodes cheaper by missing nearby nodes. On the healing path (left), you can get Foresight (50 points) by going from Blessed > Swift Renewal > Foresight, which requires a minimum 70 points. If you go the adjacent nodes (Blessed > Soothing Tide, Rejuvenator, Foresight) the minimum to get Foresight becomes 80 points instead of 70.

Two: Sub-Tree's
Warfare has two sub tree's, which once clicked on will open a new tree within Warfare. These are Staving Death and Extended Might. These can be indenfitied by the node being a different color (albeit hard to see if you're colorblind to blue's and purple's)

To unlock nodes beyond the sub tree's, you just need to unlock the first bar within the sub tree, and then in the main tree further nodes will be unlocked. Example: Eldritch Insight - 10pts > Staving Death (Quick Recovery - 10 Points) > Unassailable

Three: Champion Bar Nodes vs Passive Nodes
The yellow Nodes will always remain passive and don't require slotting into the Champion Bar to be active. Blue nodes will need to be actively slotted in order for their effects to activate. Barring the color indentification, it will also say 'Add to Champion Bar to Activate' if it is a Champion Bar node and not a Passive node

Four: Champion Bar Slotting
You can only have 4 nodes actively slotted in your champion bar at any given time. That being said, you can have multiple champion bar nodes unlocked, ready to switch out with active ones depending on situation.

If you're low on champion points, it might be recommended to invest in more of the passive nodes than a lot of Champion Bar nodes.

My four active Champion Bar nodes are: Master Gatherer, Treasure Hunter, Rationer, Plentiful Harvest. This is for material farming.
My inactive Champion Bar node is: Meticulous Disassembly
Disassembly I'm only going to switch to active when I need to deconstruct gear for materials or am refining materials at a crafting station.
As an aside, Rationer does stack with the providing skill passive (50m Mythic Aethereal Ambrosia's, 2.3 hour regular food/drink duration)
#1 March 18
0 Quote
Home Forums Player Guides
Sign In or Register to comment.