How do furniture get developed? (Example: Alinor and Vampire)

bluebird
✭✭✭✭✭
✭✭✭
First of all, many thanks and a shoutout to Cullen Lee and 'Nick' who are apparently responsible for a lot of awesome things in housing! The recent ESO Live on Housing was very informative, thanks for that - everybody can watch it at the official Bethesda Twitch channel, I highly recommend watching it if you haven't.

In the stream, they talked about how houses get developed - coordinating the things that players requested with things that they know are coming up in their future releases, reusing assets that have been already created such as the longhouse models at launch, then making a list of references and a crude map, and after some dev magic by 'Nick' we get the new house releases.

When it comes developing furniture though, Cullen mentioned that they will go to the art team asking for some flowers for example, and the art team comes up with the unique models that we don't really see ingame anywhere else.
So based on that info (anybody feel free to correct me if I'm wrong) I think that:

1) The housing team has no control over 90% of assets that we see in housing, they get those (or take those) already pre-made from the asset team who develops them for world use. So most shapes and colours and designs are determined by teams who design the world - e.g. Solitude structures and matching furniture to populate the world - and the housing team's control extends only to deciding which of those pre-made assets they want to convert into player furnishings.

2) In the remaining 10% of cases however, the housing team can request furnishings to be designed by the art team specifically with player housing in mind, and these pieces often don't really exist outside of housing - such as the specially made Heart's Day furniture pack contents, music boxes, or the new Antiquities furnishings.

If that is indeed the case, then the housing team is really only responsible for the choices they make in converting assets, but most things (designs, architectural features, and general art direction) are already pre-determined for them. So every time we see a mismatched housing exterior and interior for example, it's not really the housing team's doing, because the asset team (no idea what they are actually called

) never bothered to build an interior which lines up with the exteriors they made. That would mean that the housing team can be only held responsible for some questionable choices they made - e.g. why convert the Frostvault dungeon's assets into the Frostvault Chasm house, when there are plenty of actual Dwemer ruin models ingame that would have made for a more suitable Dwemer style home; or why convert 6 very similar basic Solitude benches into furniture when there are armor and weapon and instrument assets too that would have been far more anticipated as furniture.

The main point I'm trying to get to is that many players (including myself) have probably complained about housing regarding things that are actually not due to the housing team's actions, simply a result of the assets that they have to work with due to some overarching design vision that determines the upcoming maps and contents. For instance, I was about to post feedback about the new Vampire furniture on the Greymoor PTS, complaining that they are far too similar to Alinor, and that adding yet more of the same type of medieval/gothic dark wood furniture is a waste when there are far more important furniture we are lacking - like gray stone structural items, planters, weapons and armour, instruments, etc. But then I realized (sorry if I'm slow lol) that these were probably made by a design team that were working with a certain 'vision' for what 'Vampire' stuff should look like, which had no consideration for what styles already exist ingame or whether they would make housing look varied. 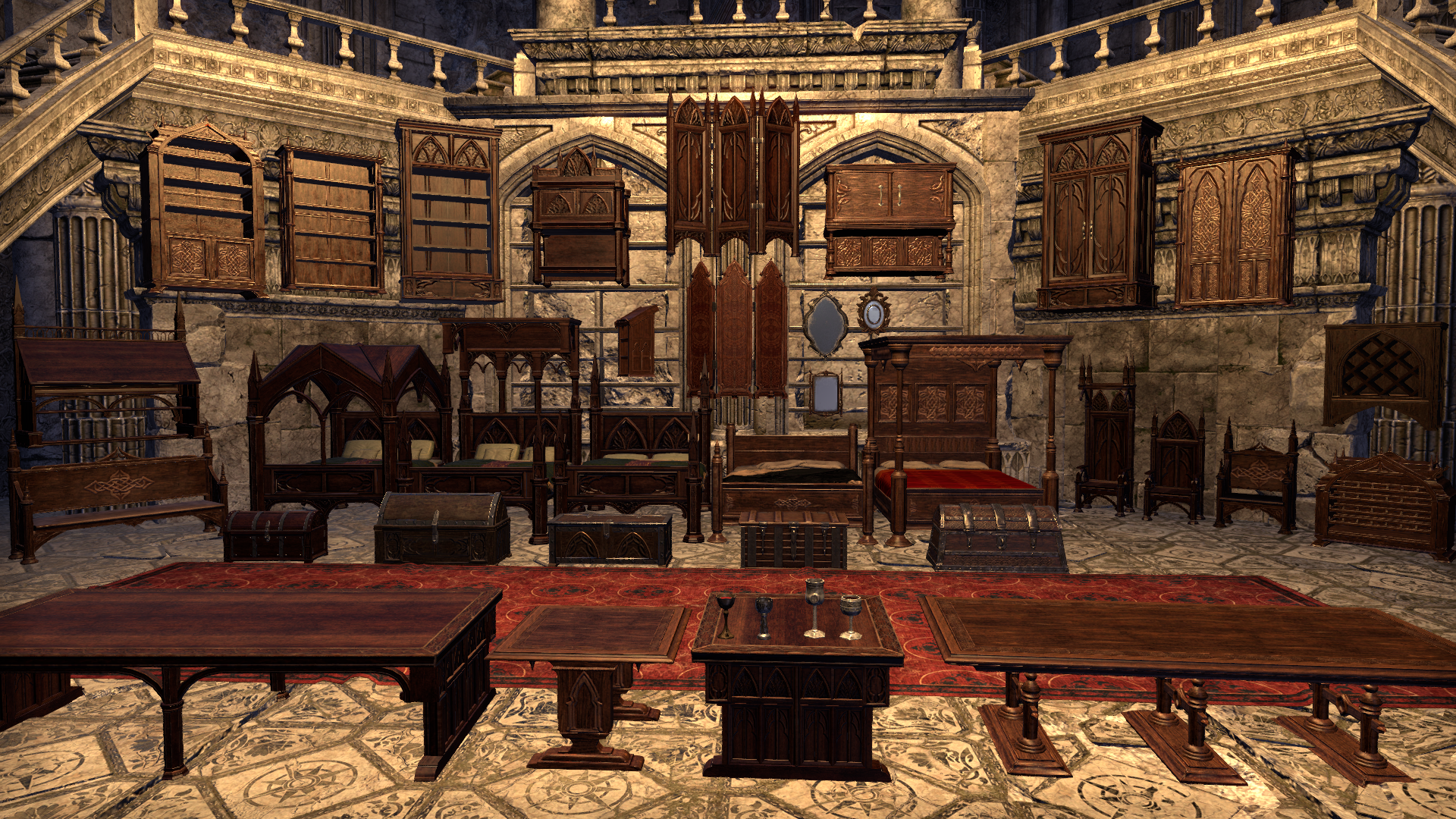 We can see for example, that 1) Alinor style arguably looks more vampiric than the Vampire stuff, since it's more spiky, more pointed, more Gothic. 2) Vampire furniture also fit in with Alinor furniture too much, some of them have very similar arch motifs in the wood, and spike details - the Vampire bench for example fits in right with the Alinor Desk and Chairs in style. 3) The colouring is also far too similar, while making Vampire furniture more gray or black lacquered would have made them stand out more. 4) Alinor furniture also fit in more with the Vampire architecture, which is pointed, arched, has spiky flying buttresses - overall Vampire architecture is also similar to Alinor architecture, albeit with a darker colour and texture.

So now my questions are somewhat different, probably aimed at the art team rather than the housing team: I guess we can speculate in the comments, and maybe some people don't mind the similar vibe of Vampire and Alinor at all. I know there is a whole range of players and tastes in the housing community too!

How do you all reckon furniture decisions are made? Were you disappointed by anything in general? I saw comments on other threads complaining about the 'basicness' of the purple Solitude furniture, and many people were sorely missing strucural item additions in this patch. What do you think are things that the housing team are responsible for, and what do we perhaps falsely attribute to them that are actually determined by some other team? Any other thoughts and comments? And thanks for reading!
Edited by bluebird on April 24, 2020 11:20AM
#1 April 2020
12
Prev12Next
Home Forums English Housing
Sign In or Register to comment.