Carbonised
✭✭✭✭✭
✭✭✭✭✭
The Clockwork Observatory Prior is one of my favourite homes for several reasons. The Clockwork furniture style is great, it's very distinctive, has many special and unique pieces, especially with all the luxury items we've gotten by now, and best of all, so many of the items have light sources, animations, sounds, or can be toggled, which brings a lot of life to homes that are mostly just dead and inert, and desperately in need of more life and atmosphere. The home itself is also very good for its size, which means you can really clutter it up a lot within the 700 item limit, due to it not being a complete oversized and bloated home like so many castles and manors, and due to it having a very small exterior, so you don't have to spend several hundred item slots just for trees and bushes and such.

So what did I do with my Clockwork Observatory, well I turned it into a true wizard's and artificer's workshop, complete with a large library, alchemy and enchanting workshops, and a factotum workshop and general living quarters. The outside holds a large sprawling garden complete with artificial Fabricant trees and bushes, and lots of animated Fabricant animals and a large Sotha Sil statue. The view from the balcony of the Clockwork City is amazing, perhaps the best view of any home in the game, and I made the view even more impressive by adding some pillars you can crawl up on. It's an observatory after all, so you need some nice perches to observe from.
The upper floor holds a clothier's workshop with the spinning wheels, the looms and the clothier's stands, as well as a small dinner area where you can get your recycled water and food paste from the food paste dispenser (yum). The smaller side room holds the bedroom with a couple somnolostations, and two Precursor factotums guard the passageway to the arcane observatory, where orreys and pumps and other artifacts function as the home's power generator and source of mechanical and arcane energies.
Taking the elevator downstairs, we find a general artificer's laboratory with various Factotum parts, soul gems, alchemical apparatuses and various other tools. The larger side room holds the Observatory's library with the complete collection of the Truth in Sequence and the Law of Gears. No paper books, of course, only sequence plaques and sequence spools.
Along the sides of the walkway outside we find large enchanter's and alchemical laboratories, where experiments can be conducted. Further along the walkway is the Factotum workshop, sort of Frankenstein style, with a half-made Factotum lying on an experimenter's table, with lots of Factotum spare parts in the crates nearby.

Every room comes with a light switch connected to the light sources in the room to turn the lights on and off, which is made possible thanks to the trigger functions of the great addon Essential Housing Tools. It's a very basic function, but an amazing implementation nevertheless, so you can switch on or off all your lights with a single button, as you can see in the video. There are also a few control panels in the workshops and laboratories, toggling on and off the various toggleable tools and items, as you can also see in the video.
This home was very fun to make, due to all the sounds, animations and visuals of the Clockwork furniture, as well as being able to cram a -lot- of clutter into this home, as you can see from the video and pictures. 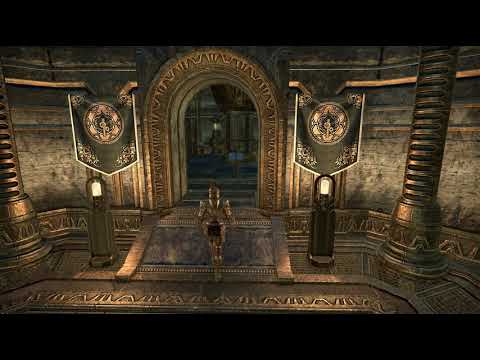