The Economy of the Inner Sea and the Ebonheart Hub

Decree of property wrote:
The original of the present document (French version) is accessible in the Arador Dayn library. 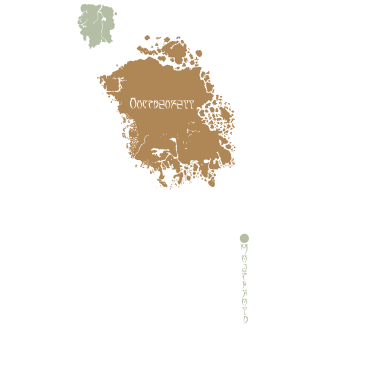 An error that one instinctively makes when looking at a map is to consider the seas and, more generally, the expanses of water, as a break, a break in continuity. In reality, the seas have always been incredible trading platforms. They are the extreme opposite of obstacles, since they allow a direct and rapid transport, where the terrestrial paths must constantly take contours.

Resdayn certainly owes much of its prosperity to its network of waterways, and more particularly to its Inner Sea. If we believe the Lessons of Vivec(1), it would have formed following the eruption of the Red Mountain in 1E668. The land of the Dunmer has always been changing, and it is not uncommon for one way to dig and another to get blocked. This is the case with the Thir River that reunites the city of Ebonheart with Narsis, which can be found on some ancient maps and which would have opened and closed again and again at the whim of the eruptions of the Tormented Spire or the Ash Mountain. It is now buried. An outline even suggests that Mournhold could have been connected to the Inner Sea by a much smaller inlet than the imposing Thir River.

Naturally, cities were pinned along the coasts and rivers, and one of them, because of its central position, was able to stand out. Ebonheart is indeed the heart of trade in Resdayn and is since its prime History the rotating platform of the area. It is undoubtedly this position of power that provoked its ancestral rivalry with Mournhold and explains that the two nations were once one.(2) The place was first a mining city founded by the Ra'athim clan. King Edward himself said that the mining was in the blood of "the royal Kin of Ebonheart".(3) The economic power of the Ra'athim clan, possessing all the mines and resources of the territory between the two cities, made also its political power since it produced the High Kings of Morrowind under the imperial model. It was only when two twins were declared both kings - which led to the disappearance of the office of High King - that Ebonheart and Mournhold split into two city-states.(4)

The trade thus equilibrated geographically around Ebonheart, settling in the plain and on the coasts at more or less homogeneous distances in response to the demand and the distance that the itinerant customers and merchants were ready to travel. Prices followed this trend, transport converging markets, and lining up with competition. An equivalent of Ebonheart was born on Vvardenfell in two distinct forms: first Vivec whose existence is primarily religious in nature(5), then Seyda Neen whose development was supervised by the Hlaalu Construction Syndic(6), partnering with the Gold Coast Trading Company(7) to grow the port village to meet the growing needs of the city of Vivec. The triad thus formed is so intertwined that it can be considered as one and the same economic hub in Resdayn center.

As time passed and trade intensified, each city found its advantage in specializing in the production in which it excelled. From Blacklight to Firewatch and to Port Telvannis, via the Ebonheart hub, the whole region became interconnected. Inland areas without waterways relied on a stable network of caravans and even silt striders were sometimes used for trade. Only Mournhold and its eastern cities remained somewhat outside this network, relying on the watercourses feeding Lake Amaya and on its trade with the southeastern Dres cities to retain some autonomy, perhaps by historical pride. The Great House Dres and its seat of Tear, for its part, specialized its development in the slave trade for which its privileged position offered the whole Shadowfen basin and the coasts of Argonia. It quickly became Resdayn's forefront slave-dealer and, in addition to the Argonian-gathering economy, was able to grow thanks to her gigantic plantations.(8)

Vvardenfell, of course, holds a special place in the equation since – more than for the other Resdayn areas – an important part of its trade is supplied by the Ashlanders tribes of the island. In fact, we are dealing here with two markets only partially integrated. The nomadic Ashlanders harvest many resources inaccessible to the merchants Housemer, and make products from these resources with their unique know-how that makes their craft very popular. But not everything is sold to the Housemer, some products having Ashlanders’ exclusivity. Thus, the prices of the products sold to the Housemer on precise points of exchange are aligned with the market of the Houses, but the others never meet this market and give rise to strictly parallel exchanges. The illusion of two integrated markets is thus maintained, but because of the greater number of internal exchanges than with the Housemer, we are really dealing with two distinct markets.

More than competition alone, which explains why Resdayn's entire economy has not concentrate around the Ebonheart hub – which yet offers rare services, has invested heavily in its infrastructure, and enjoys the strongest connectivity of the region – are the attractive dispersion factors available on the dunmeri land. In fact, not only do the inhabitants of a region interact horizontally with each other; they also interact with the territory and the climate. Thus, windy areas require different constructions, and therefore resources different from other areas, and the transport network must also adapt to its conditions. This partly explains the rapprochement between Ashlander nomads accustomed to moving in arid conditions, and Housemer, particularly in Redoran land. And as we said, Resdayn is a shifting land. It is also a land of rich and shifting deposits. Volcanic field are an important dispersive factor for the geothermal energy can be exploited from them. Those who want to profit from it will not hesitate to settle in ever more remote and dangerous places and will draw with them a whole economy that meets the needs they create.

Rich in the economic situation established over the centuries thanks to the special provisions of Alma Resdayn, the land of the Dunmer, they could have prospered so, isolated from the rest of the continent much less developed. But the Second Akaviri Invasion in 2E572 came to disrupt the economic situation by making some Great Houses sign the Ebonheart Pact.(9) Not without irony or logic, it was the city that crystallized the economic activity in Resdayn that was chosen to sign the document that was to be nothing more than a military pact of non-aggression. But the Interregnum dragged on, the three racial entities that formed the Pact, put in contact, began to develop also commercial relations. First, the trade and production of the entire Resdayn was slowed down by the clause banishing slavery included in the pact. Even the Great House Telvanni and Dres, non-signatories, were impacted: if they did not undergo big changes internally, they lost a huge part of their customers on the slave markets. The Great House Dres was, of course, the one that suffered the most violent setback. Then, if the relations with the Argonians remained shy, it is mainly in the North that the trade developed, with Windhelm, Riften and Solstheim.

Great House Hlaalu, of course, sees in this opening the potential profits that it will be able to draw. It is the first House to have rushed to these new outlets – it whose trade philosophy(10) does not conflict with haggling out of Resdayn, with other races. Its commercial policy is renowned for its aggressiveness and it draws, year after year, the other Houses with it. Its strategy to make the compromise indeclinable, sometimes using armed force, sees its liberalism imposed as the norm. Only the rigor and the rules of the other Great Houses - like the Redoran interventionism - from which it must cross the territory, can slow down this movement.

If the situation persists, the northeast market of Skyrim and the resdaynian market risk becoming integrated and eventually become interdependent. The economic catastrophe that would then represent a termination of the Ebonheart Pact could impact both economies for decades. The risk is too high and the hazard is too likely. Both parties have an interest in stopping these exchanges by strict prohibitions and clearly enforced regulations. History has shown Resdayn's ability to be prosperous and independent, and the Ebonheart Pact only breathed her out. If the latter fails to be confined to its military function, it would be better for all signatory Great Houses to withdraw before its damages are irreversible.