Deltia
✭✭✭✭✭
Welcome to part two of the Battleground Bully series where we cover The Elder Scrolls Online (ESO) Battleground Basics. Battlegrounds (BGs) are instanced based small-scale Player vs. Player (PvP) with three teams of four players each. BGs are not faction specific, meaning an Ebonheart Pact player may group with a Daggerfall Covenant player and queue up together. You can also queue solo or with up to four people in your group. Keep reading for how to get started, incentives, and general strategies! 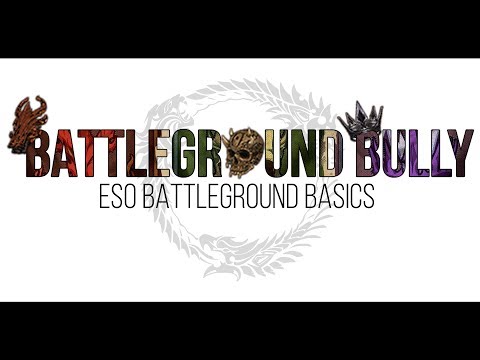 
You must be at least level 10 in order to start queuing for BGs. To start, simply click your group menu button, go to Battlegrounds, then you have a choice of options. Randomly queuing daily gives a nice reward while choosing a specific mode does not. Newer players looking to experience BGs and find their niche should hit random. Leaving a BG early will incur a penalty not allowing you to queue for 20 minutes, so don’t rage quit! Champion Points (CP) are currently disabled in BGs allowing new or returning players to enjoy the content rather than spending hours catching up.

Once queued, you'll be placed in a Match Making Ranking (MMR) system with the pool of other players. MMR is a complex topic and will be covered in a separate article later. Essentially, the higher your rating (medals earned weekly), the more likely you are to face higher ranked players. When starting BGs, you'll likely get queue pops quickly and play matches repeatedly without having to wait. The higher you are on the leader board, the more likely you are to wait to be paired with similar players. Keep in mind this isn’t always the case as the players base could be massive at peak hours and low during off hours.

Battleground matches typically last ten minutes. though they can last a maximum of 15 minutes. Game modes currently have a max score of 500. There are also two different brackets for players, levels 10-49 and 50 or end game players. You can also queue while in Cyrodiil or anywhere else in the world making it very accessible. Upon entering the BG you will be assigned one of three teams Green (Pit Daemons), Orange (Fire Drakes), or Purple (Storm Lords).
Modes and Maps

The game currently has five different game types broken down into three different categories in which you can select via group activity finder (adding with more DLC). We will cover strategies and Meta in later posts but this is an overview of the system. The first to 500 win the match (or the team with the highest after 15 minute duration). Keep in mind, winning a match and moving up the leader board are two separate things. We will cover more information on leader boards and medals below.

Capture the Relic- Three relics, one for each team. You must own your team’s relic in order to steal and capture another team’s (100 points each score). Once you score or capture a relic, it is returned to that team’s base. In order to pick up the opponents relic you must be stationary and not taking damage, stunned or interrupted. If you die carrying the relic, it will remain in place for 10 seconds before returning to base automatically. Think of this as a three way capture the flag.
Chaosball - The purpose of this game is to score points by holding the ball as long as possible. As you hold the ball, you'll progressively start taking more damage from the ball. There's also a big red circle that amplifies the damage if teammates remain inside it. When a player dies, anyone can pick up the ball assuming they are not stunned or incapacitated.

Crazy King - The goal of Crazy king is to capture a specific flag point that needs to be held by your team (maximum of two points). Think of the flag point as a resource/keep flag point. The more people standing on it from your team, the faster you "flip" it. Once captured fully, you'll start earning points until another team flips it to their team.
Domination - This mode is similar to Crazy King but there are more points and they change position more often. Think of it as mobile king of the hill.

Ald Carac: A Dwemer city ruin with environmental damage on the bottom floor center.
Foyada Quarry: A quarry set in the shadow of Red Mountain. This map features tons of knock back points that you can kill your enemy with environmental damage.
Ularra: An old overgrown Daedric worshiping site with a massive central point that you have to "teleport" to to access.
Arcane University: A ruined outer district of the Imperial City, once Tamriel's center of magical learning (Horns of the Reach DLC).
Mor Khazgur: An Orcish stronghold on the eastern slopes of the Druadach Mountains (Dragonbones DLC)
Deeping Drome: A cavern containing a mysterious Dwemer ruin (Dragonbones DLC)
Istirus Outpost: A fortification in southwestern Cyrodiil (added in Wolfhunter DLC)

Battlegrounds feature three separate leader boards that reset every week (same time as Veteran Maelstrom Arena/Trials/Etc.). These leader boards are broken down into Death match, Flag Games and Land Grab. You earn points via medals which are listed below or found in game under Help>Tutorial>Battleground. While winning influences the rewards you receive at the end, it does not influence medals. Medals from each match are awarded for specific actions like a huge 10,000 point damage hit or holding the Chaos-ball for 60 seconds. Medals alone give you a score which applies to your leader board ranking, not wins or losses. I’m not a fan of this, but it’s the reality in ESO.

So if you’re looking to be competitive, you’ll really need to think about your build and how it fits into a specific mode. For instance, a heavily armored tank is going to have a hard time climbing the deathwatch leader boards. You can access these leader boards within your journal like you would for Maelstrom, Dragonstar Arena, Trials, etc.
Medals

Besides the pure enjoyment of nuking other players in BGs, there are a decent amount of incentives. After each match you will be awarded item(s) (in mail), gold, experience and Alliance Points (AP). Medals and how your team placed determine the quality of your reward. You can also earn a gold item or the highest quality item from the weekly leader board (top 500 players) for each category (death match, flag or land grab). There are also a number of achievements, dyes and titles to obtain and the game keeps expanding on the rewards system.


Here are the Battleground items you’ll receive in the mail (set bonuses subject to change with future patches). Keep in mind they come in different armor weights, jewelry and weapons.

(2) Max Health
(3) Spell Damage
(4) Magicka Recovery
(5) When you take Critical Damage, you apply Minor Maim to the enemy for 15 seconds, reducing their damage done by 15%.

(2) Max Health
(3) Max Health
(4) Healing Taken
(5) When you taunt an enemy Player, they deal 50% less damage to all other Players but 100% more damage to you for 15 seconds. This effect is lost if you enter sneak, invisibility, or move further than 28 meters away from the enemy player.

Plan on dying a lot, getting frustrated, and not understanding what's going on. This happens learning any new "thing" and BGs are no different. Stick with it. Once you understand what mode(s) you enjoy, then you can start changing your build (skills, gear, passives, etc.) to suit that role and excel.

If you truly want to optimize your build and maximize your character, pick for a specific mode. Sure hybrids work and there are great all-around builds, but most players will benefit from specialization. More in-depth strategy later but here’s a quick list.

Death match – Have an execute ability, gear for high damage, even retrait jewelry to buff execute damage.
Land grab – Focus on speed and survivability. Bring speed potions, retrait jewelry for speed, even change mundus stone to have a super agile character that can zip around the map
Flag games – Pick a specific role that you can fulfill like a monster tank that makes sure no one grabs their Relic. Play a stealthy Nightblade that takes out Relic protectors and carriers. Even a healer is very useful in this mode.

Play for Fun or Nah?

The last thing you should decide if you're going to play for fun or seriously try to get #1 on the leader board. This will determine how medal hungry you become. Building a heavy hitting execute machine in death match in order to reach #1 in a week will take a lot more effort and determination than queuing up for two hours on a Saturday.


That concludes a basic overview of Battlegrounds. In our next article, we will be covering class strengths and weakness so you can see what suits you best. Thanks for reading and stopping by the website!