Why Play Battlegrounds in ESO

Deltia
✭✭✭✭✭
I wanted to share my thoughts on Battlegrounds for ESO here on the official forums. I look forward to your comments

Ever since I fired up Ultima Online back when Moses parted the Red Sea, I’ve loved Player vs. Player (PvP) in video games. My enjoyment has morphed over the years since I played Warhammer Online and found arenas or instanced based PvP. Having equal numbers, a leader board and a match making systems gives you that sense of climbing the endless ladder all the way to the top of your server. I’ve only reached that ladder one time in Star Wars the Old Republic and it was worth it. 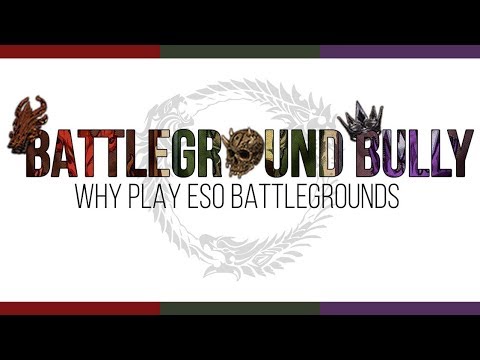 Originally released in the Morrowind Expansion (2017), The Elder Scrolls Online (ESO) has finally fleshed out a robust instanced based PvP system called Battlegrounds (BGs). Is this system perfect? No. Are there limitations, cheesy meta builds and frustrating problems? Sure. Overall it’s came a long way and a far cry from Cyrodiil only PvP. In this article I’m going to explain why I think now is the best time ever to jump into ESO PvP and play BGs!
Population

For any multiplayer game to succeed you need a dedicated and thriving community. Say what you want about ESO, it has community. BGs initial launch was less than spectacular partly because you needed the Morrowind Expansion in addition to the base game. I thought to myself “well everyone will buy the expansion and play BGs day and night!” Sadly this wasn’t the case and even on day one, I fought the exact same teams, running the exact same builds day and night.

I literally wondered if at 5 PM central time there were only 12 people on Earth playing BGs on my server? Now BGs are a part of the base game in the Summerset Expansion giving new or returning players access to the with just a couple of clicks. Upon my return I saw countless different players that I’ve never seen in Cyrodiil, PvE or anywhere else. The player base is stable, the community robust and now everyone can enjoy Battlegrounds or hate them J.
Improved Match Making Rating (MMR)

Now this is a controversial system that hasn’t been fully realized but has promise. Flashback to the launch of BGs in 2017, you’d rarely be paired with players at your skill level. We’d have a four man pre-made super team full of 1,000+ Champion Point (CP), all gold gear, 1,000+ hours in Cyrodiil players vs a random group of CP 100s. You can guess what happened. While this was fun initially, it became boring and a toxic experience for those not on dream teams.

To counter this I would queue solo and get a very similar experience. I would be either on a powerhouse three player PvP Team or play the opposing teams god’s gift to PvP four man pre-made. Running around with the name Deltia over my head made this even less enjoyable so naturally I moved on.

Upon my return I saw the positives of the improved MMR system (though not perfect). The first few hours or so playing Battlegrounds, I completely dominated each match. Now this wasn’t because of my skill level, mainly I was facing less experienced and equipped players. By about hour five things got difficult. I began facing off against the same players which were highly skilled, experienced and as well-equipped as me. I swear one player named Storm saved every Dawnbreaker just for my face.

I loved every second of this competition even if I was getting smashed constantly. Why? Because this is how I could improve. This is how I could really see if my build holds up against similarly equipped and skilled players. “Who’s who in the zoo?” I understand not everyone wants this type of environment and that’s okay, but it gives players like me an avenue for progress. I realize I'm not the best player, but now I’m no longer running to a resource at Alessia to kill three CP 100s in order to satisfy my ego. This system has a long way to go especially sorting solo players vs pre-mades or super high players waiting for ages, but it’s an improvement for game as a whole.
Play Your Way

Another problem with the launch of BGs was not having control over the game types. As with all new massive systems, it’s going to take a while for developers to add more maps and modes so you had no choice in what you wanted to play (land grabs, death match, etc.). Most players ended up death matching every map. Full disclosure here, I’m that guy too.

Now death match guy/gal can play whatever they want until blue in the face. Is this a perfect system? No. Your death recap will constantly say Endless Fury or Executioner on it, but at least you have the choice. This further adds to variety of builds that players can use specifically specializing in something like speed demon ball carrier, indomitable tank that can hold a chaos ball forever or full on damage dealing juggernaut Sorcerer.
It’s Quick

With two clicks, I can now PvP within minutes rather than queuing for Cyrodiil, experiencing lag, riding my horse for 20 minutes only be zerged down and tbagged by 20 Aldmeri Dominion (I do love AD). In all seriousness, even if things go bad in my BG match, it’s over in 10 minutes. If my son is down for a nap, I can play a game or two and move on. I simply love that I can queue up, fight and move on.

Don’t get me wrong, Cyrodiil has its purpose and is a blast. But after you’ve gotten Emperor a few times or Grand Overlord (not there yet) it simply loses its appeal. I do still enjoy fighting outnumber in order to improve my builds but often find inexperienced players being destroyed or getting ran over by 20 AD (yeah I know another AD bash).
Are Battlegrounds Perfect?

Absolutely not, but I’m not going to be ZOS hater here. The improved MMR system has some flaws especially the higher you get. The leader board highly incentives players to limiting roles like damage but the medal system is getting reworked. If you have 20 hours a day to play, you’re much more likely to get #1 than the person with a full time job, family, etc. (similar to Emperor). But the main point of concern for me is seasonal rewards.

At some point in time, just like Cyrodiil things are going to get old. Developers can only crank out new maps and modes every so often. What I think ZOS can do to improve the longevity of this system is seasonal rewards like other competitive PvP games. Break the year down in four seasons, give one uber badass reward for the top 1% or top player. I don’t know a fancy Guar, cool housing thing or a skin. While I’ll probably never be #1 in a season, it would give me a reason to try.

Zenimax has steadily invested in improvements of BGs and after a year of me complaining about it not being in the base game, they finally shut me up. I have faith they’ll continue this trend and constant improvement because let’s keep 100% real, the game has gotten tremendously better over time. I cannot wait to see what ZOS comes up with to keep players like me on the endless hamster wheel of MMOs and I've been having a blast in game once again!
Battleground Bully Series

Now that I’ve expressed my love and admiration for BGs, I have a new weekly series I’m going to launch called Battleground Bully. The purpose of this series is to provide useful tips, builds and strategies to the average player looking for PvP/BG specific information. I plan on streaming my BG runs, creating build videos and weekly videos on improving ones game play. I hope to see you in BGs and please leave me a comment if there’s something specific you’d like covered or any useful tips I may have missed in future post.
In-game @Deltia | deltiasgaming.com for Elder Scrolls Online [ESO / TESO] Guides
"It's a good day to be alive"
#1 August 2018
6 Quote
Home Forums Player Guides
Sign In or Register to comment.