Beware The Wicked Ones

Inspired by a Picture Prompt 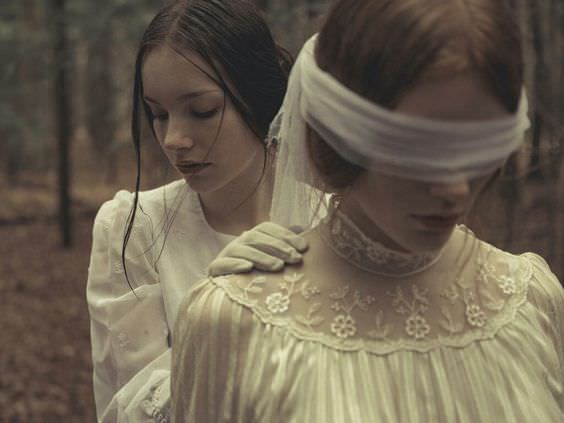 The morning air tickled her senses as she muttered the words softly to the blindfolded woman she led before her. Delicate gloved hands resting on her Mistress' sleep gown and gripping shoulders as she guided her through the open area of the forests near her estate, deep into the brush and unknown grounds. The Lord was unhappy and had requested something that chilled her to the bone, she was to lead her Mistress and his Wife, Lady Sienna into the woods and abandon her there to be consumed by the beasts that lingered, a pretty sacrifice to rumored monstrosities that lingered in shadows.

The Lady currently was none the wiser, happily to be led by a servant most trusted to wherever their destination was, despite not knowing all the details of what was to unfold and what was to become of her. "How much farther, Eli?" The Young Noblewoman's voice would break silence that had formed around them, her voice youthful and bright and extremely eager to see where it was she was led, but every time she reached for blindfold, a hand came to swat her away. "Not yet, my lady.. Soon, I promise you." Her reply escaped her lips with shaken breath. "We'll be there soon.." Her voice strained and softer with each phrase muttered. She hated this. She didn't want to do this, but what if she refused? Surely the Lord would come after her and strike her down, or have her killed on charges she could not defend against. It was the word of a Commoner against a Noble.

Eli, fully known as Elinor paused, giving Sienna's shoulder a squeeze to signal that she was to pause as well. Her hand shaking as she withdrew it and reached hands upwards to take the blindfold off of the other, a motion she felt took forever but only a matter of seconds, letting the cloth fall to the ground. This is was how she was to thank the woman that took her in, and allowed her a second chance, to abandon her in the woods as though she meant nothing to her. How selfish of her.

She swallowed the ball of nerves that rose in her throat, pushing the feeling of regret and nausea back downwards, no, she could change this. She had to. "My Lady, you must listen to me.." She croaked suddenly, making Sienna turn to her as she held her forearms in a tense grip. "Your Husband, the Lord. He wishes you dead, he believes you have committed treason, adultery against him and Lady Mara. I was asked to bring you out here and abandon you to the wolves, to the rumored beasts.. I'm sorry, quickly, we must find a way out of these woods, I believe there is a village nearby we mu--" A burning pain began to rise in the base of Eli's spine, Sienna stared in horror in front of her, hands covering her mouth with a choked sob. "My.." She tried to reach her hand out to the noblewoman, but soon the earth cushioned her fall as the color of crimson began to stain her gown, an arrow protruding from cloth and flesh, and the world slowly became darker as she watched two figures in darkened leathers bearing the crests of her Lady's Noble Estate and House approach Sienna, their blades drawn.....

Beware the Wicked Ones. Wolves that hide in Sheep's Clothing. They wait in shadows, that moment to strike...
"Welcome my friend, sit down. I have a story to tell you about a woman who rose from the embers of nothing and created something beautiful."