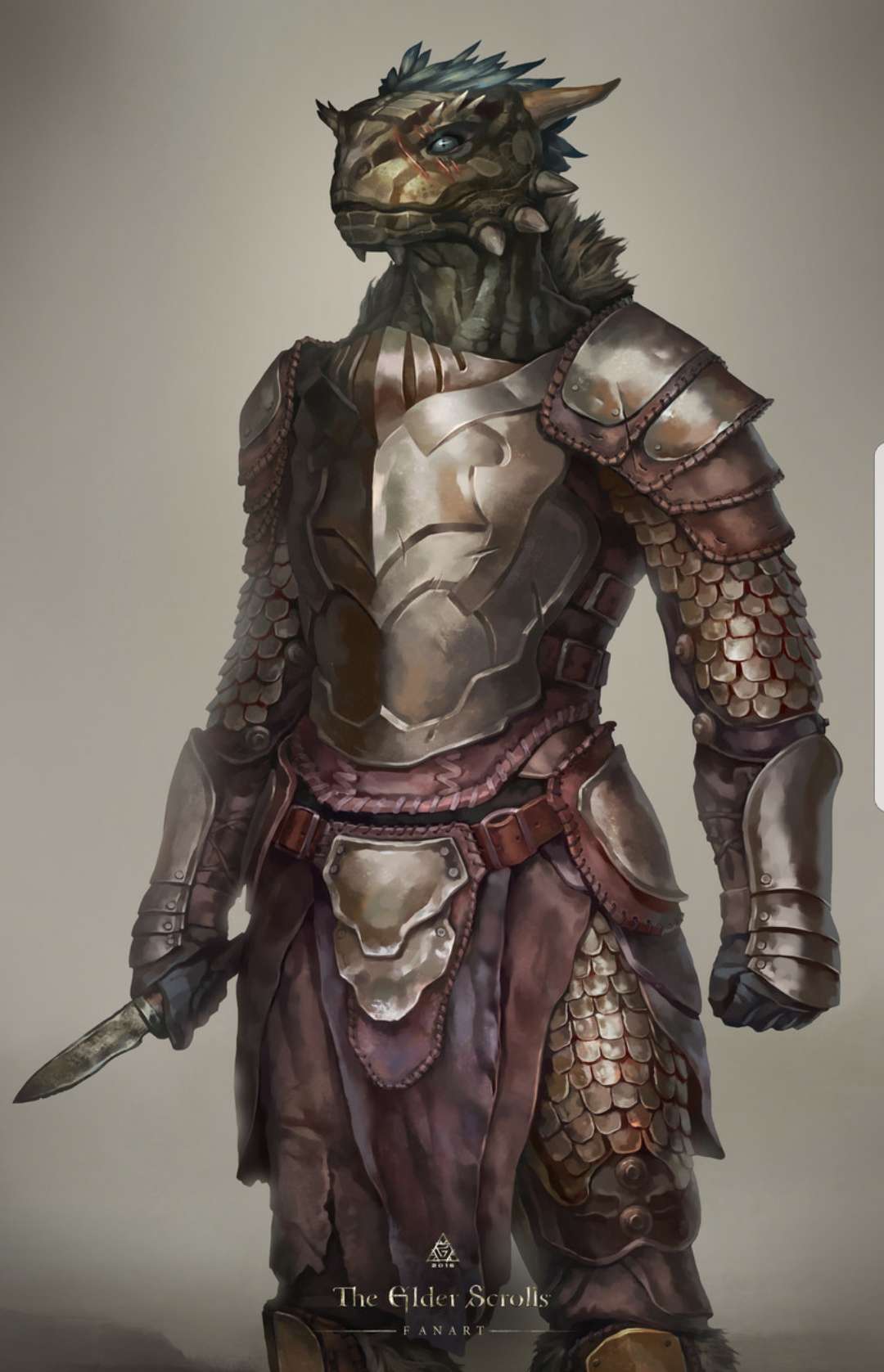 Two Grave Tongue
Argonian Male
36 | 5’9” | 230 lbs
Lawful Good | Straight
Dragon Knight
Personality
Boisterous
As one of the few argonians within the service of the Imperial Legions, Two Grave Tongue quickly realized that he was at a disadvantage as all of his accomplishments within the legions would be overlooked due to his birthright. The brass of the legions hardly ever acknolweged -let alone celeberated- the efforts of non-imperials. In response to this issue Two Grave Tongue became outspoken and vocal offering his opinions to all willing and unwilling to listen. Although, due to his mouth, he often found himself at the end of a beating in the end, he was comforted in the knowledge that he, Two Grave Tongue, would be recognized.
Charming
It is of rare instances (ex. the Lusty Argonian Maid) that any of the other races of Tamriel would ever lend any credence to the concept of an "alluring" argonian, yet with a silver tongue and a self-assertive confidence which brims over, Two Grave Tongue has had earned the reputation of being a charismatic, if not lecherous, character.
Stubborn
To be stubborn is a quality few ever promote as a boon. But in Two Grave Tongue, his adamancy is the unrelenting spirit which does not allow him to yield readily or easily even when faced against the most dire of foes or obstacles. In his stubborness, there can be found an underlining sense of loyalty, for causes and allies of which he puts a sincere stock of respect and admiration, for which he shall sacrifice himself for freely whenever and if ever required.
Flaw
Guilt-ridden
Two Grave Tongue does not readily forget his mistakes or failures. He burdens the weight upon himself and ill ever finds a means to cope with all of his regrets and weighted memories. Due to this he has turned to alcoholism to find some semblance of solace... yet, he too often finds himself surrounded by many empty bottles and a greater sense of loss.

History:
“You’re asking what my earliest memories were? Interesting. Should I expect you to believe that you are going to ask me if I retained all my memories since I was a hatchling? Because it would be a similar proposition if I were to ask if you recall your memories of you when you were birthed into the world.
Odd... I didn’t think this conversation was going to plunge into such a deepened philosophical discourse! Yet, here we are.
Now, had I known I would have cozied myself up with a few more tankards of Nordic Mead before trudging deep into the subject matter...

To your question; my earliest memories aren't specific details, but more so sensations. I remember it being bright and warm. Exhaustively warm. After some time, I could recall the scent of sand. It was an earthen odor, but it was unlike the fragrance one is acquainted with when they find themselves within verdant fields, kissed by rains, where life thrives; this scent was dull and lifeless; harsh and uninviting."
"Alas friend, to your dismay, you shall learn that not all argonians are born within the sticky wetness of the Black Marshes. As in my humble case; wherein I was hatched in the environ which is of bitter contrast to that of marshlands: arid desert.
Indeed, my young mother, may the goddesses ever keep a place within their hearts and their abodes for her, nested within the outskirts of Sentinel. And thus there I was hatched."

"I was born within the ashen dunes of the Alikir Desert, within the depths of Hammerfell."

"Life, mind you, was going to be a struggle. Not simply in the case of surviving the ungodly "realm of the burning sun," but also in the understanding that my being born; my yearning and desire to live, was to be branded with misfortune.

"Perhaps known or unbeknownst to my mother, her choosing to nest within the wastes of the Alikir claimed unforseeable consequences...
Have you ever heard of the hist my friend? I am certain you have. Whenever the conversations turn to the plight of the lizard-folk the mention of those magical trees never seems to be overlooked.
Well, I have oft heard claims that the dependency of the argonains as a species upon the hist, those trees of fantastical repute, is such that without being in close proximity of the influence of those trees, argonian hatchlings would wither and die.
I guess there is some truth to that, for out of my mother's clutch, only one hatchling managed to survive -yours truly."

"Not intending to sound sentimental, but in my life I ever only knew of one person of whom ever accepted me for whom I truly was; my mother. She was a pale-scaled girl from Stormhold named Anji-Neejin whom bore the courage to traverse the breadth of these damnable realms in search of her mate whom had been stolen by slavers and set to larbor the harsh opal mines of the Alikir. Within the embrace of my mother's love I found perch to feel as though I belonged and the hardships of the world those realized and those yet to be experienced, seemed trivial."

"Yet, lamentably she little understood of the tenacity of vile individuals and to what capacity would they retaliate when deprived of their 'possessions." in the wake of her murder and my being sold into slavery there would never be a return to that..."

"Hmm? Seems I have soured the mood. No need for weighted thoughts and emotions friend. A drink upon me to lift our spirits and burden us to merriment once more. Slavery! What? No that's a tale for another somber time. Perhaps I could regale you with tales of when I served within the Imperial Legions? Or when I became anointed as a Knight of the Lily? How about the yarn of when I was caught within a plot of assassination during a the height of a festival as I attempted to woo the heiress of a prominent and influential house?"

"And when the truth finally dawns, it shall dawn in fire!"
#1 March 2018
3 Quote
Home Forums English Fiction & Roleplaying
Sign In or Register to comment.