When I was a newbie of ESO I always wonder why people keep telling me like “2H build bad at PvE”, “Go use DW”etc. After being a veteran player I always trying find a way to make 2H viable for endgame PvE, this build is one of the possible optimized setup.

Note that stamina nightblade's rotation is very dynamic comparing to other classes(may even more dynamic than magicka nightblade), which means it's hard to master(even harder in high ping area like Asia).

Also 2H build nowadays still not competitive as Dual Wield just due to the passive and skill flat damage values itself. It's no way the highest damage setup, but still capable to do 90% endgame PvE content. So you'd better tell your raid leader what you're using in case he get triggered when seeing you are weaving the bad ass 2H weapon xD. As for me, I had use this build to clear all vet HM dungeon before Dragon Bones, and vHRC HM(more trials need to be done if I have to time to participate other non-score runs)


# Sustain
As stamina nightblade we have Leeching Strike, remember to let it run out at full duration to get the full stamina return. Most important part here is we are using Dubious Camoran Throne to suatain, after tons of experiments it provide the best damage result.

In some really long boss fights or when you need to use Vigor frequently, do 1~2 heavy attack on 2H bar then we are gtg.

With Dragon bones synergy changes, synergy now WON'T interrupt the animation of your light attacks and skills. Basically we can now press synergy key continually while smoothly doing our own rotation, which is unable before. It result a sightly better sustain if your group can provide enough amounts of synergy like Undaunted's Necrotic Orb or Templar's Spear Shards. Even if some synergies itself won't restore resource, Undaunted Command passive will restore 4% of your max resource each time you activate them.

Also it doesn't matter where your 5 pieces are, just full 2 sets of 5 pieces on body then gtg.

Battle axe provide 500~1k more damage than greatsword in most dummy parses. We don't use Mace cause we will have enough penetration in group.

Both Infused or Nirnhoned are very good for 2H weapon trait, difference is very small.

This setup provide most damage(Solo 6M parse 37~39k), but also hard to get, mainly because the War Machine gold jewelry drops in vHoF.

(Screenshot taken in Public test server, which only have purple War Machine jewelry.)

(Screenshot taken in Public test server, which have Gold Agility jewelry, live server only have purple quality of them.)

(Screenshot taken in Public test server, which only have purple War Machine jewelry.)

5 Night Mother's Gaze/Morag Tong, 5 War Machine, 1 Asylum Battle Axe, 1 vMA bow
Those setups dedicated to provide more group support besides War Machine, coordinate with you stamina dps teammates before the fight to get higher boss penetration debuff if possible. For example, replace NMG 5 pieces with any other group support set if NMG already present in your group. We won't wear Sunderflame cause we are light attack build though. For more details, check Alcast's Stamina Optimization in Raids

A standard beginner setup for stamina build. But obviously we lose the main meaning of this build without War Machine, also get lower damage.

5 Spriggan, 5 Hunding's Rage, 1 Asylum Battle Axe, 1 random bow
I still recommend Asylum 2H in beginner setup because it's fairly easy to farm in normal Asylum Sanctorium, for example, LFG in clockwork city or Craglorn zone chat with some random people to get in there if you don't have a guild form group for you.

If you can't even afford purple Spriggan jewelry, blue also work and won't have too much difference, cheap like 500 gold per piece. Finally, ask a guildmate, friend, or even yell in the capital zone chat to see if someone can craft Hunding Rage for you.

#Skills for Dungeons and Trials

For new player to easily find where are those skills, check here.

- Executioner:
Since we are using Asylum 2H, we must use Reverse Slash over Killer's Blade to get insane ult point regen during boss under 45% health phase. Morph doesn't matter though, I personal prefer Executioner to get better sigle target damage, but Reverse Slice also a very powerful AoE, after CP buff the slash damage can go up to around 90% of original hit.

- Brawler:
- this skill itself doesn't provide enough high bleed damage nor direct damage compare to DW rending slash, we use it here mainly for its shield. Shield rumber increased by each enemy hit , basically spam this in trash fight and you will barely die. In some situation when you know there will be incoming unavoidable high damage, hold block and use it to hit something if possible too.

- Rearming Trap:
- One of standard strong DoT for all stamina damage dealers, also gives important buff Minor Force. Not like Dual Wield build which should put Deadly Cloak in here, we now have a spot to put Rearming Trap on the front bar to get 3% more weapon damage from fighters guild passive.

- Surprise Attack:
- Main spammable, we are not using Wrecking Blow because stamblade already need to apply lots of DoTs and other buff skills, which have no time to channel Wrecking Blow, SA itself provide not bad damage.

- Relentless Focus:
- Not only a buff tool, the bow proc from this ability also provide insane damage. What determines a excellent nightblade damage dealer is that how many bow proc he can launch in a fight. Practise more, you will eventually get it. With Dragonbone changes make the stack of bow proc remain even after you recast it early or expires, happy news for high ping or newbie players.

- Poison Injection:
- One of standard strong DoT for all stamina damage dealers, keep other range DoTs and spam this if some fights you have to stay in range. Other than that not much to say, just keep it up all the time.

- Endless Hail:
- Ibid, keep it up all the time. Note that there's a bug with vMA bow for now(Dragon bones), if you animation canceled Endless Hail when using vMA bow(block, roll dodge, bash, bar swap), the bonus damage from vMA bow set won't apply at all. Solution is, when you swap to back bar, use Hail first, let its animation complete, then use other back bar skills.

- Flex spot:
- - 1. Resolving Vigor(Recommend):
- most powerful stamina based healing, note that it's a healing over time, use it every 5 second if u need it, not spam.
- - 2. Reaper's Mark:
- only slot this if you think your dear healer can save your ass in the whole fight. This skill provide a little more critical from Assassination skill line passive, and we don't actually use this in rotation, instead, use it on something close to death, to save resource and time.
- - 3. Mirage:
- not very interesting skill for our build, although it also provide passive critical like the Mark, but as a damage dealer in a group we won't have much income hit like tank anyway. Only situation that really useful may be the Sanctum Ophidia Serpent fight, to drain your magicka.
- - 4. Rally(Front bar):
- Move Rearming Trap to back bar and put this to front bar for usage. A small but long last healing over time skill also gives Major Brutality. The final burst healing effect also makes it extremely strong in solo situation. New player might need to know that you don't have to wait till it expire to get the final healing tick, simply just activate it again.

Trick: Sometimes when you want to save gold from using expensive Weapon Power potion, like pug dungeon, soloing, you can slot Rally, then use looted stamina potion.

- Leeching Strikes:
- our sustain tool, also gives a bit healing. Remember to let it run out at full duration to get the full stamina return.

- Incapacitating Strike(or Soul Harvest):
- low cost ultimate that make War Machine available to use. You can choose Soul Harvest morph to get more ult point regen in battle, but lose a little bit single target dps(like 500?). In single target fight, always use this instead of Dawnbreaker. Also try apply all back bar DoTs first then use this at last if possible, to bring more damage bonus to the main bar.

Once again, the rotation is very dynamic, we will have to swap bar continually for shooting the Spectral Bow to keep up high damage. If you still can't catch the idea after reading this section, check the solo parse video.

Activate Leeching Strikes, Relentless Focus before the fight. If your ultimate and potion both about to available to use, always use ultimate first then drink the potion(see Siphoning tree Catalyst passive).

Shoot Spectral Bow whenever it is ready, I highly recommend using Stendarr or Action Duration Reminder addons to track your current bow stack, thus you know when you should bar swap back to the front bar to shoot the next bow while you applying back bar DoTs.

Once target(boss) below 45% health, keep others DoTs but stop using Brawler if possible(sometimes we need that shield). Start using Reverse Slash instead of Surprise Attack, pay attention to the current ultimate points if it about to hit 70 points, if so, bar swap to use Incapacitating Strike then immediately swap back to keep using Reverse Slash. In this phase we still shoot Spectral Bow if it ready.

No other changes till target die.

We need to put some points into health to offset the health we lost by using Dubious drink, around 17k is a safe line for most PvE content, play around with it and adjust points for your own needs.

It doesn't really matter which race you use, difference both very small between stamina based races above, redguard still provide most comfortable sustain though. If you are not a big fan of "min-maxing", use whatever race you like.

Recipe of this food is expensive like hell atm(400k), so just buy cooked food in guild store, or buy from friend who can cook it.

Trick: In some situations when you want to save gold from using expensive potion, like pug dungeon, you can slot Rally, then use looted stamina potion.

Posion gives about 2k single target dps, it costs extra coins like the weapon power potion though, take it off if you wanna save money in pug dungeon group.

Not necessary. If you feel like very lack of sustain, go for it. Make sure only on stage 2 though. Stage 3~4 takes extra fire damage but don't give extra recovery anymore. Even Undeath passive can't save our ass because our health not high as tank and we won't block more often as tank.

Note that I'm not top tier nightblade players who can guarantee to shoot bow proc every 5 light attacks, also high ping (300~350) and low fps (15~20) in trials make me very hard to light weaving between skills, so those parse below will still have much spaces to improve. 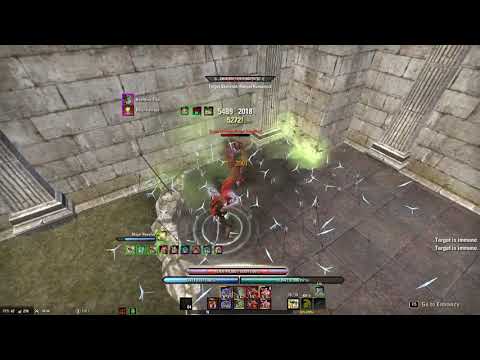 2H build always been a "romance", or even a "faith” of some players. Watching your character hold a big bad ass two-handed weapon maybe a fun play experience indeed. For me, it's just more like a unique way to play stamina dps. If this build did give you some inspiration or thought, I'd be glad to hear that.
Edited by Clefor on September 30, 2018 5:44AM
#1 March 2018
13 Quote
Home Forums English Player Guides
Sign In or Register to comment.