Lynx7386
✭✭✭✭✭
✭✭✭✭✭
A bloodline of khajiit dating back to the pellitine and anequina dynasties, the Lynx clan originated in southern elsweyr and at one point was a prominent family with holdings in senchal, tenmar, and dune.  In more recent eras the clan's influence and wealth has declined, and it's few remaining members have dispersed. However, those who still remain are loyal supporters of the aldmeri and queen ayrenn.  At present, the Lynx clan has five notable members; M'asad, Pakhet, Bastet, Leonin, and Raksha. 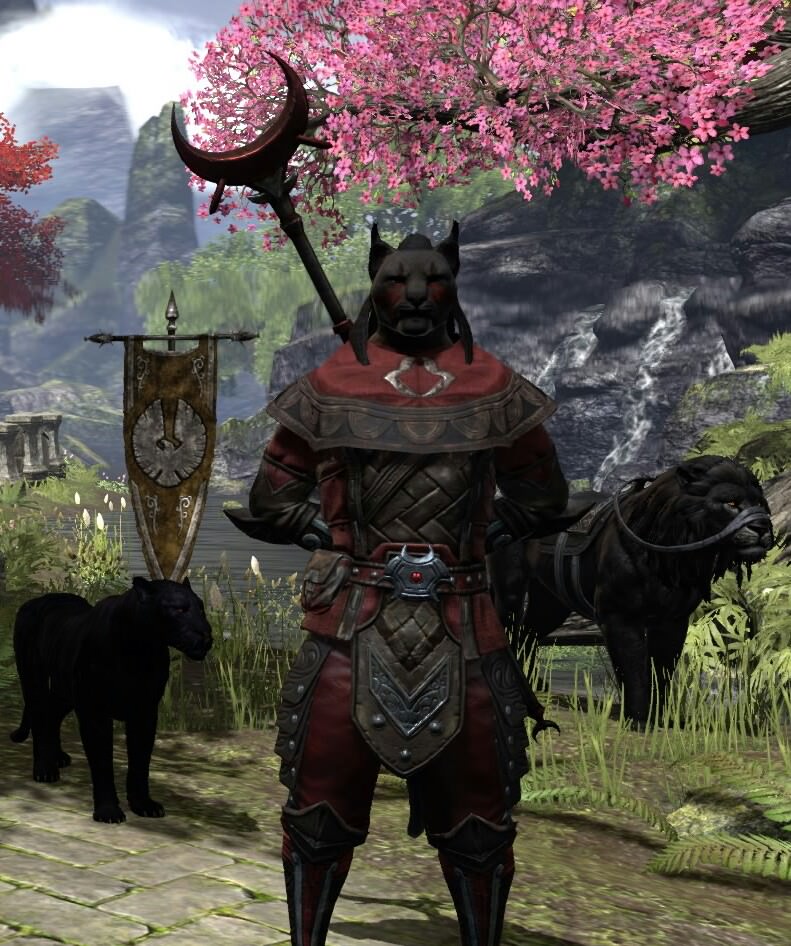 The Dagi and Dagi-raht of tenmar are short of stature, lithe of build, and notable spellcaster and mages among the khajiiti peoples.  M'asad began his mystic career with basic destruction spells and pyromancy, but has since taken on the title of blood mage; ripping the life force from his enemies to empower himself and his allies.  M'asad has been the subject of much distrust among his fellows in the dominion for his use of such dark and distasteful magic, but none deny the effectiveness of his spells.

Composed and disciplined, M'asad has a cold and silent disposition and a tactician's mind.  He lays plans within plans and always thinks ahead.  Currently M'asad holds the rank of master wizard within the mage's guild and spends much of his time on the isle of eyevea studying ancient spells and the dark secrets of mundus, though it is rumored amongst his peers that he works by twilight for the dark brotherhood, exercising his abilities on their contracts.  M'asad views Sangiin, the god of blood, death, and murder, as his patron deity. 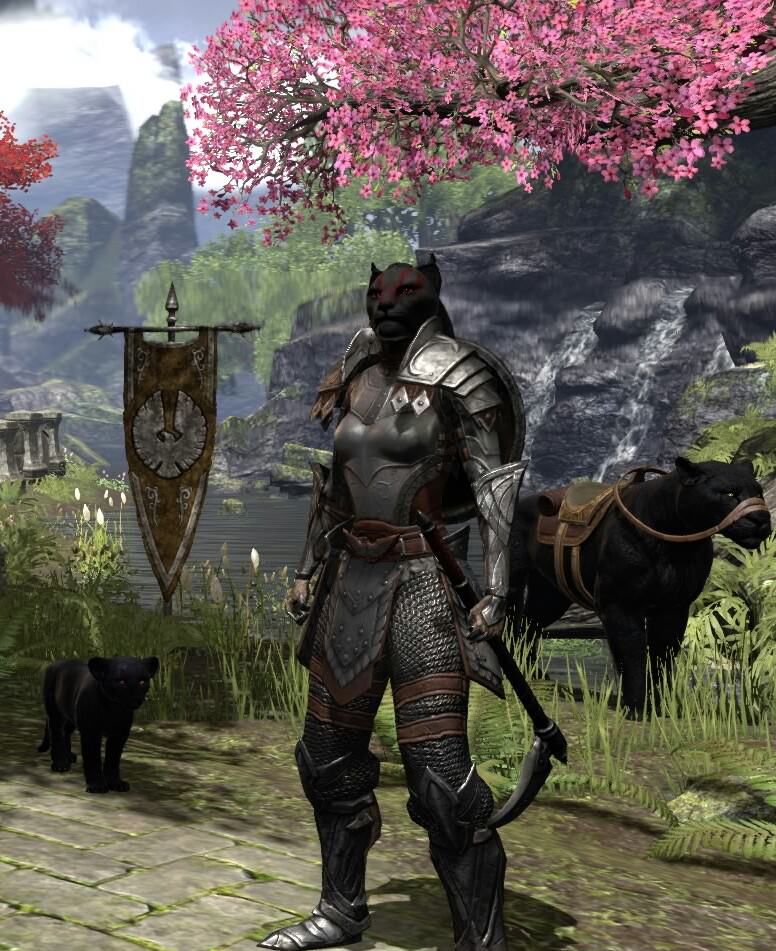 M'asad's younger sister, Pakhet has a nearly polar opposite personality.  Despite her small stature, she is aggressive and straight forward, and always seeking a challenge.  Pakhet was born with an unusually powerful connection to fire magic, but has always liked the control over it that her brother exhibits.  Instead she is considered a wild mage, unleashing terrible power of its own chaotic volition.

Rather than follow the path of the mage, Pakhet took that of the warrior.  She makes up for her small size in battle with speed, skill, sheer aggression, and a firestorm of uncontrolled destruction magic.  She is always looking for a new challenge and a more worthy opponent to test herself against, and to that end joined the fabled undaunted.  She spends her days travelling tamriel with undaunted companions to delve caves and dungeons seeking the most dangerous threats to test her might.  Pakhet views Alkosh, the great dragon cat, as her patron deity. 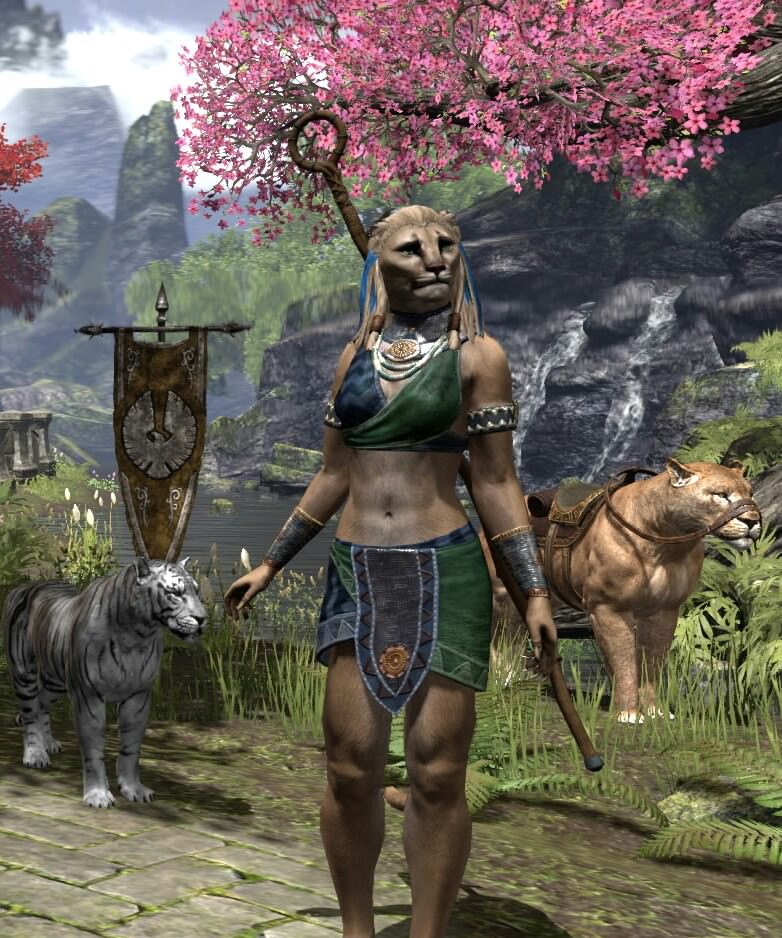 Bastet and her brother Leonin were born in dune and spent their youth in reaper's March.  Bastet was groomed from an early age to be a moon priestess, and trained at the temple of the two moons in rawl'kha.  She has always been a natural adept at wielding restoration and healing magic, and was tasked by Mane Akkuz-ri to aid the dominion in its war efforts as a healer and cleric, primarily but not exclusively attending to khajiit soldiers on the front.

Calm and caring, Bastet is the most passive of the Lynx clan, though when hard pressed she is fully capable of conjuring sunfire to cleanse the souls of her assailants.  Bastet views Mara, the mother and goddess of love, as her patron deity. 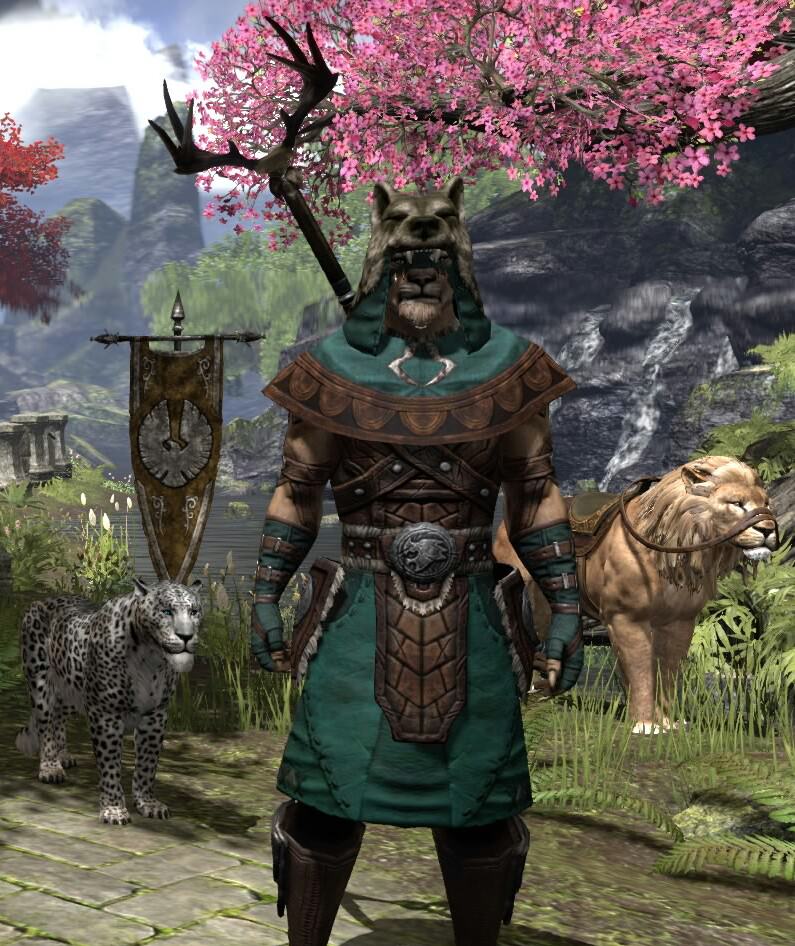 Born in dune with his sister, Leonin has been always been plagued by an insatiable wanderlust.  He spent much of his youth exploring reaper's March and the neighboring region of Malabal tor.  From an early age he took an interest in the bosmer and their culture, and after some tutelage from their spinners discovered he had an affinity for nature magic.

Leonin learned what he could from the spinners who would teach him, and eventually became a nomadic wanderer; travelling tamriel to experience other environments, creatures, plants, and cultures.  He trained with the wyresses of glenumbra and the tree-minders of blackmarsh, as well as visiting the college of winterhold in skyrim.  Leonin considers himself a druid and warden of the green,, and while he has pledged his loyalty to Ayrenn and the dominion his first priority is always preserving the way of the natural world.  Leonin views nirni, the aspect of the sands and forests, as his patron deity. 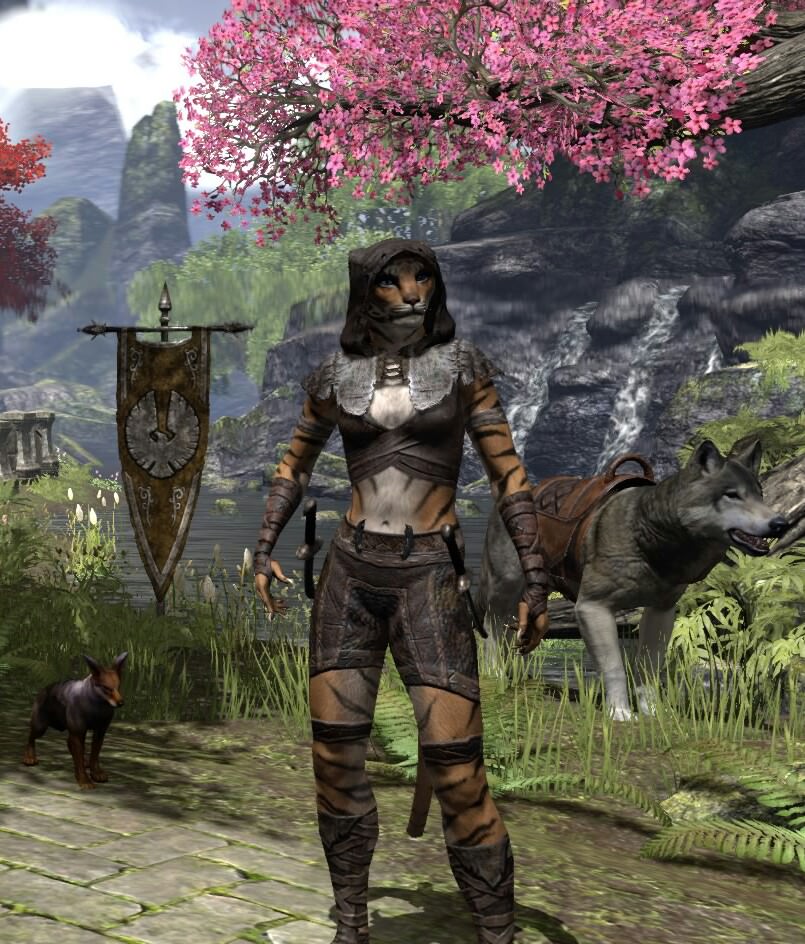 Raksha was born and raised in the black kiergo district of Senchal.  She grew up a street rat, surrounded by criminal elements and hardship.  The local chapter of the thieves guild exploited her size and youth in their heists, and Raksha became a master thief and cutpurse over time.

Following in the path of her idol, Rahjin the purring liar, Raksha searched for anything that would give her the power to rise above her birth.  She found what she was looking for during a heist on a temple of Khenarthi - an enchanted amulet imbued with the goddess of the winds' power.  Wielding the wings of khenarthi, Raksha discovered she had the ability to manipulate the weather, create localized storms, summon storm atronachs, and even render herself ethereal.  The artifact has made her a more capable thief and quite a formidable combatant.  Since it's acquisition, Raksha has viewed Khenarthi as her patron deity,.