InyanaNacht
Soul Shriven
Born by the name Inyana Rein to parents unknown in the plains of Bal Foyen, Inyana was adopted and raised to the age of 16 by Amala Noire, a prominent member of House Dres and Mages Guild. Brutally traumatized by the events of warfare that plagued her home and took her family at the young age of 6, she has little memory of her origins or kin. After losing the only mother she knew, Amala Noire, in the battle of Coldhabour, she took the name Nacht in her honor. Shaped by a lifetime of bloodshed and loss, she turned her attention to the war efforts of the Ebonheart Pact. On a moonless night, tired from battle, her camp was attacked by vampires. All were slain, save her, as she found herself with a thirst that only blood could satisfy. Inyana roamed the hills of Ash Mountains praying for Azura to release her from her curse. In a vision, Sithis answered instead, calling her to the sanctuary of The Dark Brotherhood. While fulfilling a contract in Wrothgar, she came in contact with a fellow vampire Dunmer by the name of Terrore Aeternum. Bonded by the ritual of Mara, they vowed to embrace any of the exiled Dunmer turned vampire as if they were their own children. With Terrore and her Argonian sister, Fire-In-Eyes, by her side, Inyana continues to brutalize Tamriel in a state of retribution. 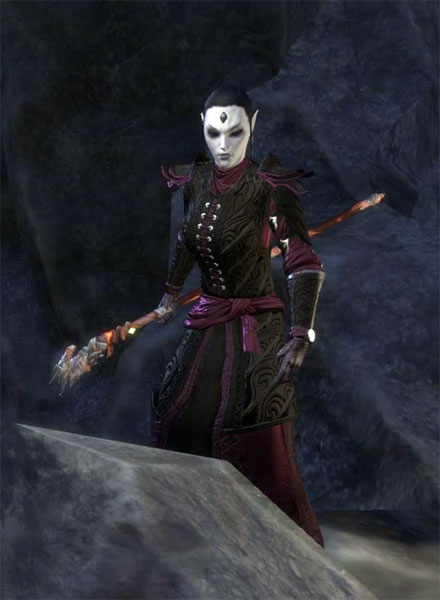 *this is a rough draft, i wanted to put it somewhere that i could link it to my guildmates. feedback is welcome but not necessary.
#1 June 2016
1 Quote
Home Forums English Fiction & Roleplaying
Sign In or Register to comment.