"Comrade! We have need of you. Will you fight by our side?" 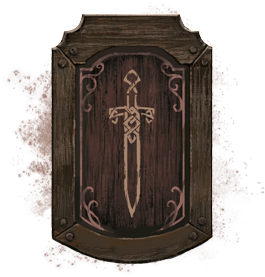 "The Fighters Guild, present across most of Tamriel, provides a common and, more importantly, public place of training, study, and employment for those of a martial persuasion. The guild is a professional organization to regulate the hiring and training of mercenaries, protect commerce, capture or drive away beasts, and similar security duties. Guild halls can take on a contract from any citizen, provided it does not conflict with the laws or customs of the region." - UESP

Established in 2E 320 by Potentate Versidue-Shaie, the Fighters guild has grown from a Tsaesci-exclusive army-for-hire to a Tamriel-wide organisation with branches and influence all across Tamriel. However, this guild will focus on only three of its chapters: Windhelm, Skywatch and Wayrest. Each chapter will operate largely independently of the other two, although all three will come under the same in-game guild, since it is one big organisation, and doing so will also help to encourage cross-faction interaction between the chapters.

While this guild will focus largely on the daedra-slaying contract the in-game guild has taken on, it will also provide many opportunities for the 'one and done' contracts that the guild was most used to under Jofnir Iceblade. If you can kill it legally, you'll probably get an opportunity to kill it.

Fighters Guild events will be run on a contract basis, with no set schedule. Anyone who wishes can host contracts. However, if anyone wishes to host contracts at regular intervals, they are more than welcome to do so. Contracts can be 'one and done', or they can have other contracts that follow on from others in a storyline. The specifics of a contract can be left entirely up to its GM, such as what the mission will involve, the skill-level required of participants, and how many participants the contract is open to. Contracts will use the following form:
Ranks
Disclaimer: The actual meaning of these ranks is largely headcanon, since there are gaps in lore that require filling for the sake of RP.

Anyone who is not wanted by the law can become an Associate of the Fighters Guild, regardless of their skill (or lack thereof) in combat. The rank of Associate can also be granted as a preliminary rank before a rank more suitable to the individual's level of skill is assigned. Associates are free to use all opportunities the Fighters Guild can offer that are not bound by rank, but are expected to follow the rules and regulations of the guild.

Unlike Associates, Apprentices are considered 'proper' members of the guild, and as such are eligible for recommendation for contracts. They are placed under the supervision of one or more tutors, and lack much standing in guild affairs.

Should they pass an examination, Apprentices can rise from their rank to that of Journeyman. They are considered fully-fledged warriors, and will be tasked with responsibilities that Apprentices are highly unlikely to be considered for.

Journeymen need only show greater skill in combat in order to advance to the rank of Swordsman. It is considered the guild's intermediate rank, although Swordsmen are expected to show above average combat prowess.

The first of the guild's 'high' ranks. It requires a Fighter not only to show skill in combat, but also dedication to the guild. If a contract requires supervision, it is likely that the supervisor will have to be of this rank or higher.

The lowest of the administrative ranks. Defenders can be relied upon by Warders and Guardians to ensure that their orders are being carried out smoothly within the chapter. They are also the lowest rank permitted to act as a spokesperson in chapter affairs.

Warders serve as the Guardians' lieutenants, and assist with his or her administration of the chapter. They may be in charge of more specialist operations within their chapter, such as daedra-hunting. Each Guardian has two Warders under him or her.

The rank of Guardian is the highest that any player can reasonably reach, as the ranks of Champion and Master are extremely limited in number, and RPing one would be outright powerplaying. Guardians are usually tasked with overseeing the affairs of their chapter, and have responsibility for the chapter's members.

If you've read this far, that probably means your interest has been piqued, which is good! If you are indeed interested in joining the guild, contact @thorn.keim80 (Titus Meridius) for EP, @Xcaribur (Ughrah gra-Narzul) for AD or @Cammy2k14 (Riona Teutonica) for DC. If your character is a fresh recruit, they'll be given an IC examination to determine a suitable rank, unless they merely wish to join as an associate. If you're RPing a character who already has history with the FG, then all the IC recruitment will involve is your character transferring to the Windhelm/Skywatch/Wayrest chapter, no examination whatsoever.
Edited by Flexar on September 14, 2015 9:34PM
#1 April 2015
2 Quote
Home Forums PC/Mac – EU
Sign In or Register to comment.