I posted my latest Templar stamina DPS build on my site and wanted to share it here.

The full article is on my site here: http://deltiasgaming.com/2014/11/24/radiant-harvester-eso-templar-dps-build/ 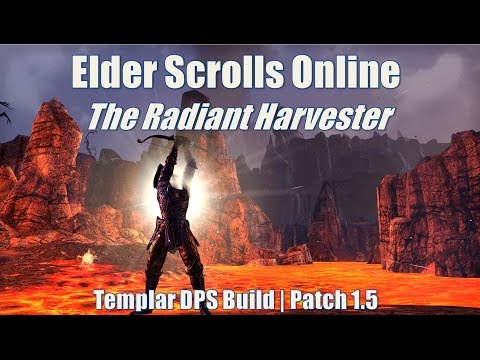 
The Harvester is back and has manifested into a damage dealing group-oriented machine. I’ve proven myself wrong again by creating a sustainable damage dealing Templar using a stamina build. So without further ado, The Radiant Harvester – ESO Templar DPS Build.

Just like the original build, The Radiant Harvester is an area damage (AoE) beast wielding a two-handed great-sword and the bow after the powerful updates in 1.5, making it one of the strong single target weapons in the game. Stamina has seen some love with past updates, and it’s beginning to shows now bringing both AoE and sustained single target damage to the DPS underdog, the Templar.

I’m still rocking Big-Jake, an Imperial race Templar on the Aldmeri Dominion faction. Imperial race is a solid choice for more max stamina but this build can work with almost any race choice especially those focused on stamina like Bosmer, Khajiit, Redguard, and Dark Elf to name a few. True min maxers might want to go with Redguard for sustained damage or Khajiit for burst. Additionally, I decided to roll Werewolf with this build since passively you get a 15% stamina generation for merely having the skill line unlocked. Moreover, you only suffer poison damage while in Werewolf form which I can’t even do since I’m not using the ultimate Werewolf transformation, so only positives with Werewolf at the moment. Your choice on Werewolf and or race choice, but that’s what I’m working with.

Some of the old Harvester limitations are gone as well like sustained damage and the need for enemy corpses. However, this build does sacrifice a lot of solo sustainability for group oriented game-play. The purpose of this build is making a solid damage dealing Templar capable of succeeding in Trials, Dragonstar Arena, and or Dungeons. Ideally, you’ll be playing with friends who are specifically dedicated to healing or tanking so you can focus on your job; massive damage. Here’s the breakdown of this build’s strengths and weaknesses:

“Dash and smash.” Bar one is our heavy AoE damage setup. The majority of your time using bar one will be spent killing multiple mobs or finishing a boss below 25% health.

This bar is relatively easy to get the hang of. If you have a pocket healer consider swapping in Solar Barrage, and use it prior to Carve. You’ll lose some survivability while leveling or soloing, but you can add a lot of damage and ultimate generation. I like to have at least one heal on all my characters. Risk reward, your choice

This is our primary bar which can pump out single target damage or AoE. We don’t have a finisher nor do we want to be up close. This bar is really meant to synergies with our gear, the new City of Ash two piece set that drops meteors. We want to constantly do damage over time (DoT) with poison to proc meteors. When I get my timing down and I’m on top of my game, I can easily pull 900+ single target DPS without potions and or ultimates.


If you have excessive stamina (over 80%) use a Acid Spray for even more DoTs
If you low on stamina (below 40%) pop Radiant Aura for increased regeneration
Part of the gear strategy with this build is reducing the potion cool down to 15 seconds instead of 30. Additionally having the Medicinal Use Alchemy passive for extended time on potions to 13 seconds. Making it almost possible to have a potion off cool down or the effects on your characters. It’s an expensive way to DPS, but with 70% critical and 250 Weapon Power constantly applied, I’m a monster damage dealer.

Armor Weight – You’ll want all medium if possible because the medium armor passive Dexterity awards higher critical per piece of armor (21% for all medium armor). I’m currently using five medium, one light and one heavy not by choice (drops in City of Ash). However, the Undaunted level seven passive now gives percentage increase to all stats for different weights of armor. So wearing three types of armor 6% to all my stats (pending two points into that passive). I haven’t had enough time to test it out and confirm if this is a better choice, so if possible stick with seven medium.

Valkyn Skoria – The helm is a rare drop in City of Ash new Veteran Rank 14 dungeon. I’ve ran this probably 10 times only to get one drop which is heavy armor. So yeah, I need to run it many more times to get medium infused head. The shoulders are a random turn in via the Undaunted Pledge system. Having four VR 14 characters allows me to farm these dailies so don’t get frustrated if you can’t find these drops right away.

NOTE: The Lich set from Crypt of Hearts might be higher DPS. I’m working on getting two medium pieces of each before changing

Hunding’s Rage – A craft-able set and a powerful at that. Adding tons of weapon damage and 8% weapon critical, this is the stamina builds go to for crafted gear.
Poisonous Serpent – Another rare set only dropping in Trials. I have yet to obtain a three piece set but my end goal is to get three pieces for huge poison damage.
Master weapon – The rarest of the rare, a drop from the final wave in Dragonstar Arena another incredibly powerful weapon that I have yet to get.

Alternatives – Since most of this gear is super high level, an easy replacement is a four piece Hunding’s and a four piece Night Mother’s Gaze (weapons and all armor pieces) all of which can be crafted. For Jewelry, I’m currently wearing Shadow Walker, a PvP set. You could also go with Hawk Eye or another Trials set. Anything that gives you weapon power, critical or stamina would be good.

Traits – The standard Divines on small pieces (Shoulders, Gloves, Boots, and Belt) and Infused on large (Head, Chest, and Legs). If you can, go with Precise on weapons though Sharpened is a good choice as well.

Attributes – As an Imperial race, it takes very little for me to reach 2,800 health with food. I think currently, I’m sitting at 14 points in health and 40 something in stamina. The numbers aren’t that important, reaching 2,800 health then dumping the rest into stamina is.

Food – Enriched Honey Brittle (adding health and stamina) is the best DPS choice. Though using some purple food adding all three stats has some benefit for solo players.

I haven’t forgot about the low level players! The best thing to do while leveling is change some morphs. Instead of Radiant Aura, go with Repentance as you’re bound to have some bodies laying around. I’d also go with the Brawler morph instead of Carve for the Two Hander. It takes a long time to get Blazing Shield, and this will give you good damage bubbles and protection.

You’ll also need a strong crowd control or stun ability like Volcanic Rune (morph of Fire Rune | Mages Guild skill line). Self healing is important and we already have Breath of Life but even consider Remembrance as an alternative ultimate if you’re struggling to stay alive. Even consider wearing five medium and two light to have some more magicka and free up a cast or two for Breath of Life.

Another morph to consider changing Acid Spray to Bombard. This locks enemies in place making it hard for them to reach you. Until you have Bombard, Magnum Shot (morph of Scatter Shot | Bow skill line) is a good low level choice punting enemies away and keeping distance. When in doubt keep enemies away from you. If they get too close, swap to bar one and spam Brawler for added protection.
In-game @deltiasgaming | deltiasgaming.com for Elder Scrolls Online [ESO / TESO] Guides
"It's a good day to be alive"
#1 November 2014
1 Quote
Home Forums English Player Guides
Sign In or Register to comment.