Home Forums English Xbox – NA
Sign In
The Scribes of Fate DLC and Update 37 base game patch are now available to test on the PTS! You can read the latest patch notes here: https://forums.elderscrollsonline.com/en/categories/pts

Tamriel Tavern RP is an active guild on Xbox-NA server focused on the lore of Elder Scrolls and role-play. The guild welcomes all RPers and is well suited for folks who have a busy RL but want to participate in role play of Elder Scrolls. We embrace game mechanics and use them to complement text role-play. The guild is set with a tavern as the backdrop and has an in-game house designed as the tavern with a rich history.

Are you
an aspiring Lore Master who wish to be well versed in the lore of the Aurbis, or
a keen Role Player looking to unleash your creativity in story telling, or
a passionate Adventure Lead / Dungeon Master who takes pride in designing and running RP events for others?
Tamriel Tavern RP is the place for you!

We are also friendly to folks who are new to role play and we have a lore library to support character background development. Do not worry that you are new to RP, we will take it slow and guide you. Engage in conversations as your character while you journey through Tamriel and the rest of Aurbis. It is a chill and relaxed environment.

While all characters are welcomed, respect for each of the player is a core requirement for the Tavern when speaking out-of-character. All players who are like-minded are welcomed to the Tavern.

We believe in a balance of gameplay. It is ok if you are in 4 other guilds. Let your creativity flow. Join us for story-telling, adventures and drinks!

You may search in-game Guild Finder or contact the following for an invite:
GT: CougarN - Tavern Owner / GM

If there are any guilds who are keen on inter-guild RP collaboration, please feel free to reach out to CougarN.

See you in the Tavern! 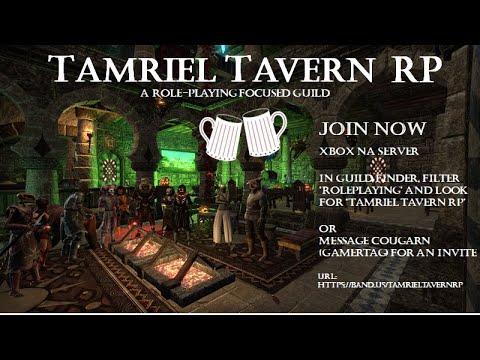