All Armor with Stamina Enchants. All Jewelry Robust with Weapon damage enchants.

On execute follow the same skill order but replace all Surprise attacks and DW DoTs with Killer's Blades. If you find yourself having too much stam drop one of the heavy attacks on the front bar for 2 extra Killer's Blade weaves.

Keep in mind I do all of my dps tests in a 6 mil skeleton without shards or orbs or a mastwr staff. That means that 3 heavy attacks are needed to sustain through the fight. In a trial you may have a lot more sustain (Valariel) or less sustain (Vet Mage) so you can adjust the rotation to better work from situation to situation. The order of skills NEVER changes, but how many heavy attacks you do will depend on your sustain. For example on valariel you should only need 2 heavy attacks. 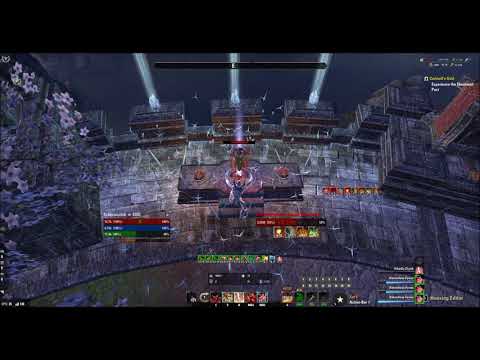 Kragh offers the highest damage gain in groups where full target penetration is not achieved, because the 1 piece on it is the strongest one-piece for a stam user to have and offers a 2.97% DPS increase on a non fully penetrated target. Velidreth however works best if full penetration is achieved. In addition its proc hits certain enemies (Manticora is an example) multiple times. My raid group will be running an optimized buff system so I am running Velidreth…if there are no penetration cap then Kragh is bets in slot for most fights.

Penetration is the best damage buffing stat to use when building a character. Normally in a non optimized raid you need as much penetration as you can get which is why NMG is so important. War Machine was a surprise, because I thought that TFS would surely outparse it, however WM is definitely a better set AND it helps the group out significantly.
Nightmother’s Gaze – 2580

Warrior seems to be coming out on top for most stam builds in this DLC. By slotting Dawnbreaker on the front bar we are getting around 526 weapon damage from that Mundus, which is quite a large chunk of our dps. Our crit is too high to take advantage of the Thief stone and too low to make Shadow Mundus be better than Warrior. Lover is a choice to run, but the DPS gain from warrior is almost exactly the same and if you have buff sets in a raid Lover quickly loses its power.

Proc rate for the Axe passive is too low to warrant using it, and daggers scale better with raid buffs.

Since we are shooting for a pen capped scenario we have infused/nirn and precise to choose from. Precise is nice but Nirn is a lot better. Nirn not only increases the base of your Hail damage, it also buffs your weapon by 200 wep damage which is huge for all your skills. Running Nirn allows your hail to start ticking and go through the lower part of its damage buffed, once you bar swap, the Infused trait off the main hand takes over and gives your Hail a higher ceiling to reach.

6. Why Incapacitating Strike and not Rend?

Incapacitation Strike's damage itself is not great, but the damage bonus it provides is huge! When combined with a front bar burst it can be quite nasty. Plus we cannot forget the flawless weapon damage bonus on the front bar.
Edited by hedna123b14_ESO on August 20, 2017 7:11PM
Valor