Kalik_Gold
✭✭✭✭✭
✭
Thanks for the freebie..

I recognize the pose at the end of the animation. I had a good laugh. 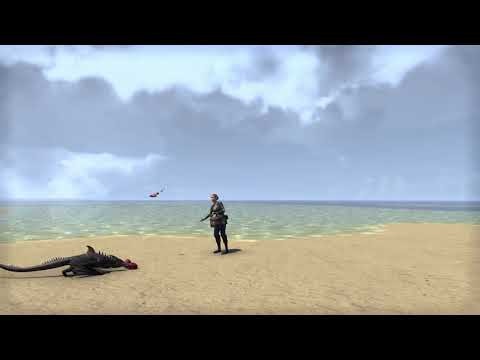 Alik'r and it's cities were overrun by the undead Ra-Netu and therefore he made an allegiance with Alik'r's own Ash'abah tribe. These Ash'abah with his help, cleansed the city of Sentinel in Alik'r desert and it's surrounding areas of the undead brought to life by the Withered Hand. After rescuing Sentinel from undead, King Fahara’jad’s personal bodyguard the Goliath of Hammerfell, who was given this name by Imperials in the region; asked to assist the tribe after learning of the defeat of the Withered Hand to the Ash'abah. Kalik promised Goliath he would task him with fighting enemies on the battlefield if he so desired. Goliath being a Yokudan warrior wields a massive sword in respect to the Ansei, and a replica of Volendrung, the hammer of Hammerfell. Not many soldiers are able to wield double two handed weapons, but Goliath loves to get up and personal in a fight.

Jux Blackheart is a master thief that was frequenting the Sisters of the Sands inn for pilfering during this time. Jux was known to infiltrate any bank vault he came across and even delved into Ayelid ruins without detection. Kalik can vividly recall the night he met the famed thief. Jux found himself rummaging thru a slightly inebriated Kalik’s pocket for too long, on a full-mooned night and because of this and the glimmer of his golden armor in the moonlight and his greed. He lost his left pinky fingertip as a lesson! But in return, he gained a new friend, as it was his first time since a child being caught red-handed...

Kaotik Von’Daemon an outcast, and a half-caste between a Breton mother and a Redguard father. Kaotik become a pariah due to his conjuration of Daedra pets. He was taught healing magic during his childhood years by his Breton mother. His father due to Redguard customs exiled him from the desert, sending him by wagon caravan to be a soldier in the war in Cyrodiil. He happened to meet Kalik while traveling from Alik'r, during this long caravan ride the caravan he was in was ambushed in Bangkorai by a group of bandits. Kalik by chance was also traveling thru this area on his Auridon Warhorse (which was bestowed to him by his friend, Darien Gautier). During this ambush, Kalik was able to rescue five hostages from the bandits. Kaotik was the first rescued, and Ras Kalik also recruited him to be in the Ash'abah tribe. These core Ash'abah tribesmen may never be seen together in travel as they partake in their own adventures but they always know what each other is doing; as they frequent a hideout in northern Bankorai. Their hideout an old Orc castle ruin, is kept watch by Nuzhimeh and she passes messages written between them, and frequently they also enjoy her company and her bed.

The other men rescued were a Dunmer banker, a Breton monk and two Imperial soldiers. One of the Imperials claimed to be related to Abnur Tharn the Battlemage of the Imperial Elder Council (Ras Kalik's mentor in the Five Companions). Cinan Tharn is really Abnur's drunkard treasure hunting illegitimate son, that was caught smuggling artifacts out of the Ayleid ruins in Cyrodiil and the elder of the two Imperials was Tyrus Septim a retired battle-mage soldier (now mercenary) and guard to the Tharn family. As much as Abnur Tharn hated his half-sister Euraxia, he dislikes his bas†ard son more. Tyrus now a ruffian and privateer had been paid by Abnur Tharn to watch over Cinan as much as possible. Cinan Tharn a drunkard, loves to drink a quarter barrel of Nord mead before he raids various delves and dungeons for relics to sell on the black market. Tharn also plans to one day run an illegal gambling ring... which he thinks will net him more gold for his wares.

The Dunmer captive shackled to the Imperials looked familiar to Kalik from his time in Morrowind.... and he recognized him as Tythis Andromo a House Telvanni slave-owner and banker from Vvardenfell. During a rough interrogation to Tythis, Ras Kalik learnt why the bandits accosted him. The racist Dunmer was providing slaves as soldiers for the Three Banner War. The bandits were trying to negotiate a lucrative ransom for Andromo and the Imperials.... Kalik did not need any of this gold and he could never set Tythis free as he did with the two Imperial soldiers. His past involvement with slavery and war crimes, made Kalik's blood boil. He chose not to execute Tythis, as he figured the worse punishment for this former rich and opulent slave owner, is to now be an imprisoned servant for Ras Kalik and the tribe.

Herzog Zwei the Genesis a Breton and also a prominent monk of the Cult of the Ancestor Moth, was seeking to purchase an artifact from Cinan Tharn, before their capture. This artifact being the Ayelid artifact; the sword Sinweaver. After their rescue and the exchange of gold to Cinan for the sword he decided to slip away before Ras Kalik could question who he was, and why the Ancestor Moth cult worshippers wanted that sword. Herzog was headed to Nagastani — An Ayleid ruin in eastern Cyrodiil. He had read in scrolls that the Sword would give him uber magical powers, if he performed an Ayleid ritual at an old shrine hidden there. Equipped with the artifact sword, he was off to start his own adventure. Ras Kalik did indeed notice the sword however, and instead sent a letter to Jux Blackheart (whom also was interested in Ayleid treasures), to attempt to find Herzog and acquire the sword. (*Azani Blackheart in Elder Scroll's Oblivion is Jux's descendant some 747 years later)

And so the Redguard, Imperial and Breton men have parted ways for now... While Ras Kalik is off to Elsweyr to encounter the latest threat to Tamriel, with Abnur Tharn and Sai Sahan - - DRAGONS!! Little does Kalik know a few people are awaiting him in Senchal besides Sai. A necromancer survived his attack on the Withered Hand, while in Alik'r. The one known as Auriek Siet'ka is also following him to the land of the Khajiits and Cacique the Sage of Ius a Shaman mystic who has become attuned spiritually with Tu'whacca (a Redguard God) and Ius (the Animal God), after being burned severely by the escaped dragons, is awaiting his arrival also.

The journey to Senchal will also put him on a path to meet a strange man which was infected with an untreated Peyrite disease and also was the exiled from the Order of the New Moon cult, due to his sickness. He originally joined the cult to worship Laatvulon, the green dragon, mistakenly thinking it was the Daedric prince Peyrite. This confused and suffering cultist is known as Tsar al-Bomba and he is on a path to spread the disease. He was originally infected in Orccrest while recruiting members there. Can Ras Kalik and the shaman Cacique cure this poor soul, only time will tell. Little does Tsar al-Bomba know, the infection is tied to Vampirism, but eventually the desire for blood, will take over his mind.

Movárth Piquine - a former vampire hunter (now infected) within the Fighter's Guild (and a secretive necromancer) was in Skyrim working with the Morthaal Guard. On a patrol mission he was caught in the Frewien's ice curse outside of Morthaal with the frozen undead. Movárth's vampiric infection kept him from becoming an undead minion to the curse. He was able to use necromantic ice-magic to encase himself safely until he was freed with Freiwen, when the Vestige Ras Kalik broke the curse.

Bates Vesuius of Dawnstar - grandfather of Silus Vesuius. His love of fire will eventually lead him to become a follower of Mehrunes Dagon (the daedric prince of Destruction). Mehrune Dagon delights in creating chaos, ostensibly for the sake of change, throughout Tamriel through the work of mortal agents he selects. He often destroys these agents once they are no longer useful.... Bates Vesuius will be the first in his family to go down this dark path, but not the last.

Uri Ice-Heart - twin of Urfon Ice-Heart. Twin sons of Atli and Oljourn Ice-Heart that are originally from Markarth but are now residing on the Jerall Mountain range near Cyrodiil, their younger sister Araki has also relocated but she is in Windhelm currently. The twins joined the Winterborn Reachmen while living in Markarth. Urfon pushed west to Orsinium with the Winterborn Clan, leaving his family behind. Uri stayed behind with his parents and sister to live in the family cabin for safety, to avoid the Vampire plague infiltrating the Reach. After news reaches him and he hears of Urfon's death... Uri leaves and heads home to the Reach and is seeking vengeance. Meanwhile, his sister has moved on to Windhelm to join the Fighter's guild.