lamatadita
✭✭
I was exploring Lake Xanmeer Manor today and noticed a graphical glitch on both sets of stairs heading from the entrance toward the lake. When my character gets close to the top of the stairs on either side, the texture of the stairs and part of the front of the house switches to a VERY low resolution.

I checked my settings and everything is on max (my PC can run this game at max easily). I also turned off my PC and turned it back on, but the issue persisted. Updated my graphics card drivers, didn't fix it. I did a few Google searches to see if this was a known issue and came up with nothing, so finally I had some friends check it out, and they said it's happening for them, too.

Then I had the idea of checking the PTS version of the house, because I didn't remember noticing it there and I knew the PTS hadn't been updated since before Murkmire was released, and I was right--I can confirm that this issue DOES NOT occur on the PTS. I also noticed that my FPS is significantly lower there, around 60-65 FPS as opposed to 100, so my theory is that this graphical issue was an attempt to improve performance by lowering the resolution of the entry level when players go up to the second level. However, it seems to be triggering too early so that the low-res portion is still on-screen when the switch occurs, and it is noticeable and very ugly.

Considering that ZOS will almost certainly be asking upwards of $100 for this home, I really hope that this issue can be resolved. Lowering resolution in that area makes sense if it improves performance, but the change is triggering too early and it's immersion breaking.

You can check it out yourselves, but if you don't have game access or are too lazy at the moment, I uploaded a YT video showing the issue and asking others to submit tickets about it: 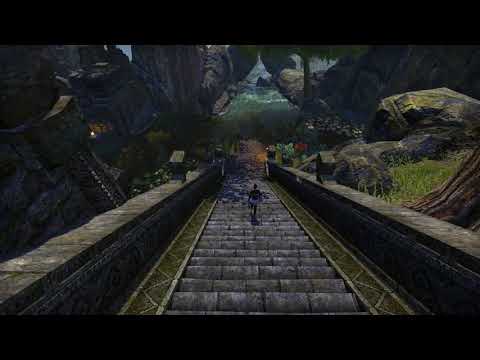