Carbonised
✭✭✭✭✭
✭✭✭✭✭
The final of my Dunmer homes is the Ebonheart Chateau. This is a large castle, and thus the furniture limit is really hurting. So once again I had to focus on some specific places, and leave the rest of the place somewhat at minimum.

This is an Ebonheart Pact castle, situated just across the water from Ebonheart city itself. Thus, I decorated the exterior with lots of Ebonheart Pact banners and pennants, to really give off the Pact vibe. The flowers and trees are kept in the volcanic theme, to fit the location atop the side of an active crater. Ashflower trees and red cherry fall trees as well as lava blooms make up most of the vegetation. Since ZOS decided to screw us over and block off the view to the lava flow with rocks, I made an impromptu ashen balcony to really show off the amazing location. Had I more slots, I would have decorated this balcony with furniture, but as it is, it unfortunately had to be left blank for now.

The high tower that we managed to get included for the home in the last minute I decided to turn into an outdoor relaxation and bathing area. Who doesn't want to jump into the hot tub and relax with some cheese and fruit and a good book with the sight of lava flowing past below and the volcano rumbling and roaring in between? I know my Dunmer would. Speaking of volcano, I really love the rumbling sounds the volcano gives off every now and then. It's extremely atmospheric I find.

Apart from the lounge and bath in the tower, the main attraction of the castle is the basement. Tamriel is a land of many strange cultures and races, and my character has traveled all over the world, and even out of the world and into artificial worlds and oblivion planes, as well as having saved half of Tamriel's citizens on the way. Real life explorers back in the day often brought back exotic items and treasures from faraway lands, especially in the time of the great explorations a few centuries ago. That's how we got the modern museums full of stuff from primitive cultures, and even today, people collect ethnic art and objects.
Thus, my Ebonheart Castle basement has been turned into part exhibition, part museum, and part celebration of my character's explorations, achievements and experiences; with an overall focus on primitive cultures that have always both repelled and fascinated a cultured Dunmer such as my Indira. And to her, most non-Dunmer would be considered primitive.
The exhibition has been divided into themes. There's a small Craglorn section, a large Orsimer and Wrothgar section, a section of Aldmeri Dominion cultures, primarily Khajiiti and Bosmeri, a rather large section of exhibited Argonian primitive artwork (Indira is of the persuasion that they make most of their "decorations" out of mud and excrement, though some claim it is from Hist sap), some totems from the Ashlander cultures (the only part of Dunmeri culture that Indira, being an Indoril herself, considers primitive), and there are some relics and remnants of Clockwork origina that my character picked up from her travels in the Clockwork City. A Nord corner has also been made, with artifacts and sacred items from both the time of the Dragonpriests and modern times. There's a few Breton statues and tapestries, and a section devoted to Redguard items, complete with an Ansei sword.

Amidst the cultural items, there's a showcase for the holidays and other events that Indira has participated in, complete with banners to commemorate it all.

The other half of the basement has been turned into a massive treasury with lots of gold, coin, valuable items and clutter, lots of chests and containers and other objects to show off the amassed wealth of Indira and her House.

Eventually, I hope to decorate more of the basement with luxury items and achievement items from new chapters and DLCs, to keep the theme of a museum or exhibition of the Tamrielic lands, though the furniture limit will probably put a damper on that. 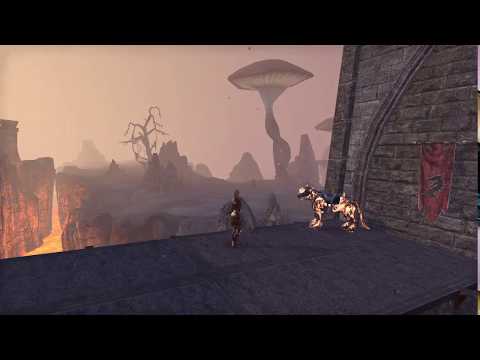