ZOS_GinaBruno
Community Manager
In the Thieves Guild update, we wanted to make it more clear which attacks players are using, while preserving the responsiveness and feel of the combat system. So, we started with a simple premise: if an ability is successful, you should be able to see it impact (or launch, in the case of projectiles). Now, every successful attack will display until the moment of impact/launch. Instead of canceling the impact/launch of the first ability, we now obscure the first few milliseconds of the interrupting ability. 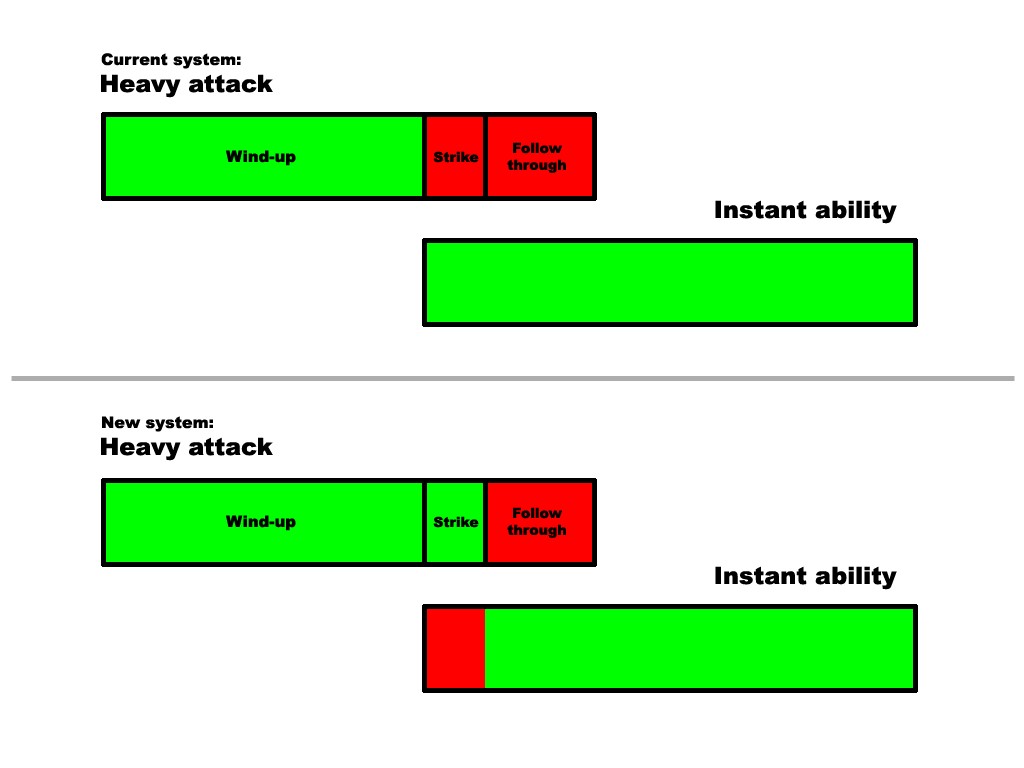 The above examples show a Heavy Attack interrupted with an instant ability. The green part is what you see, and the red part is what is not shown. In the first example, you can see the way it is currently on the Live megaservers and has been since launch. The Heavy Attack can be interrupted at almost any time during the wind-up. At the time it is interrupted, the strike happens, but it is invisible because it is obscured by the beginning of the interrupting ability. The second example shows our current method of handling interruptions. Instead of obscuring the strike/launch, we show it up until that point of impact/firing, opting to instead obscure the (less important) first few frames of the interrupting ability.

We believe this visual adjustment meets the criteria we set when we were designing this improvement:

One side effect of this change is that there are shorter (or in some cases, no) blend times to smooth the transitions depending on exactly when you choose to fire an interrupting ability. When you’re dealing in milliseconds and giving players that kind of freedom , you sometimes have to forego perfectly smooth transitions in order to make sure the player is receiving proper feedback and telegraphing to other players exactly what they are choosing to do. Having said that, if you find particularly egregious combinations (ability X interrupted with ability Y), please let us know; there may be some things we can do to help smooth them out.

As always, we welcome your feedback. In fact, it will be instrumental in informing us how to proceed with this improvement. Our internal testing has proven to be very successful, but there are so many different playstyles, builds and rotations, we want to make sure we try to implement this in a way that feels good in all cases and doesn’t need to be taught through a tutorial; exactly what you see is what is happening.
Gina Bruno
ESO Community Manager
Dev Tracker | Service Alerts | ESO Twitter | My Twitter
#1 February 2016
Staff Post
19 Quote
Prev123456789Next
Home Forums Public Test Server
Sign In or Register to comment.